Saturday I planned on going to Erie, which is one of two bigger cities near me. I wanted to go to Hobby Lobby for a specific item that Wal-mart doesn't carry.

Gibbs changed my mind. Friday night he was starting up with his ears again. He was rubbing his head on the floor, shaking his head and crying.

Saturday morning first thing I called the vet. They said bring him in at 10:10.

We sat and waited. 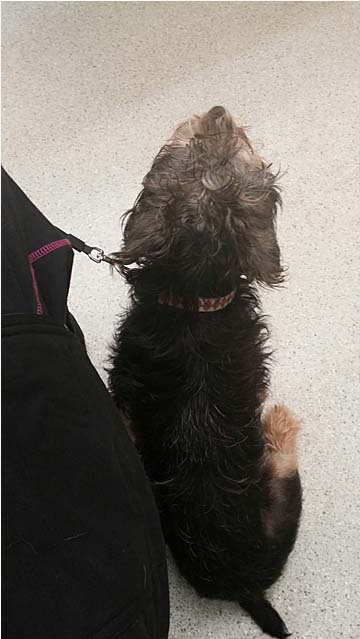 11:15 we finally get called in to an exam room. We sat and waited some more. 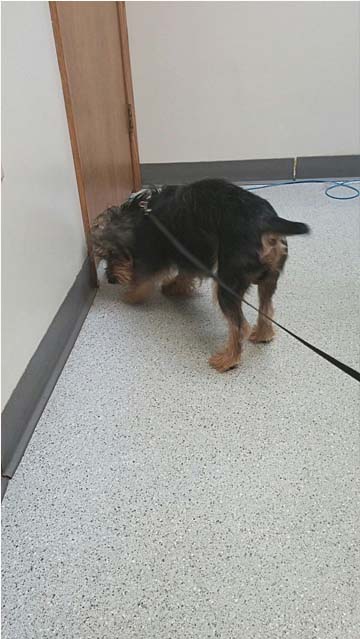 Oh and by the way, Saturday morning his ears appear to be fine. Also when the vet looks at them she says they appear to be fine but lets take a little swab and test to see if anything is going on. And then we waited. 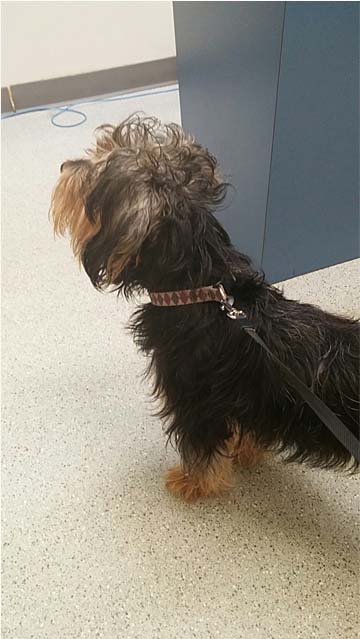 Apparently his ears didn't have a problem so I have no idea what he was doing Friday night. We did discover he had some fleas on him though. OH NOS. AND apparently his baby canines never fell out but his adult ones grew in. The baby ones are pushing on the adult one and at this point they are not going to fall out on their own they'll need to be extracted. OH NOS

Now I know you would prefer pictures of a cute Gibbs face but OH NOS he was not going to look at the camera.

Poor Gibbs. Fleas are easily treated, but I'm sorry to hear he'll have to have his teeth extracted. Glad his ears are fine, though!
Later today I will need to take Sammy to the vet too :(

I give mine an oral flea and tick preventitive

Oh no!!! The little guy is trying to remain happy even though he was to many teeth...:)JP

Maybe the pain of his teeth made him rub his ears like that, poor little thing can't tell you can he? I often wonder about the cats if something is hurting when they have off days.
Well, hope it all goes well and lets see more piccies please.
Briony
x

I was thinking the same thing...perhaps he was rubbing his head because he had such pain in his mouth? I always feel bad when I don't know WHY they are crying. Poor Gibbs...extractions are not fun. At all. Hey, I never knew you were close to Erie! I spent many happy times there when I was younger. My ex's grandmother lived there. We used to go to the park all the time! Beautiful! I sure do hope Gibbs is feeling better today.

Poor little Gibbs and poor you for having to cancel your shopping plans!

I'm with the other comments--those teeth may be causing him pain. You know how your whole head hurts when you have a toothache...I'm sure it is the same for him. Poor guy.

Poor Gibbs! Sadie had the same issue with her teeth. It's sad when our little ones hurt and don't understand why and can't tell us what's wrong.

Poor Gibbs. I'm going to link this post to Awww Mondays. Tell him and perhaps that will help.

Westies have a tendency to have adult teeth grow in next to baby teeth. Yes, they do need to be extracted to prevent future issues. I'm hoping there isn't any type of infection going on. Katie

He does seem out of sorts but I'm sure you're relieved his ears are fine
Hope the teeth don't give any trouble.

Poor sweet baby! Jeremy's big dog Smokey was so prone to ear infections! He was so miserable. But Jeremy tried to keep his ears clean and no problems in the past year. Yeaaa.....Enjoy your week. Thanks for sharing.

poor Gibbs- maybe his teeth made some pressure on his ears?Hope he's doing better.

Poor Gibbs! Once those teeth are out he'll feel better. I'm just glad that nothing is seriously wrong with him. When they aren't happy, we aren't happy.

Poor Baby! How is he now? Ever figure out what was wrong?
hughugs