I managed to complete 2 challenge pages last weekend and this is the second one.

April 4Art Challenge:  WatercolorsJournal Prompt:  It's Water Under the Bridge


I know this resembles a child's drawing of a house but it's actually my version of a covered bridge. I've never claimed to be an artist and this proves it. Any way. The center (dark blue) part of this was done on watercolor paper and then glued down to the main page. I'm thinking that I don't fully understand how to use watercolors but right or wrong I had fun.  The outside edge of the page was done using watercolor colored pencils. Those are actually pretty cool. I just colored the page with the pencils and then took a damp sponge to blend them. 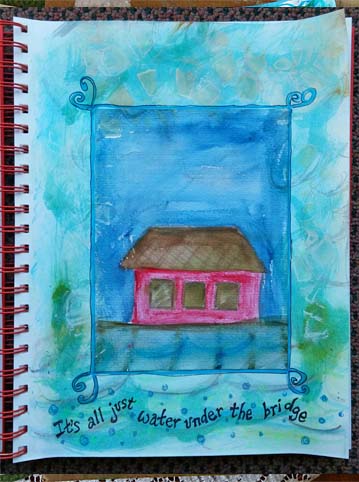 I finished it off with markers to add the swirly type border around the center picture which I then outlined with a black sharpie. I added the text along the bottom with a marker and randomly drew little circles around which were my version of bubbles in the water. If you're wondering what the two green spots are on either side, those were bloopers that I attempted to cover up but they still managed to shine through to say "Look at me".
Posted by Ann at 12:30 AM

I didn't even think they were bloopers! And as long as you had fun, you achieved you goal!

i thought about buying the water color pens until i saw the prices.. if i were going to use them as much as i do picmonkey i would buy them. i did not notice the green things until i read the post.. i am thinking your book is getting pretty thick by now..

I can't believe you hand lettered that - Flippin' amazing!

Looks Super! Just the fact that you're doing things like this, impresses me!
hughugs

I love the colors and I've always loved your penmanship. Yes indeed.

Have a fabulous day. Scritches to Gibbs. ♥♥♥

I am with everyone, good lettering. Watercolors you try not to soak the paper too much.

perfect pic for the words! you must feel good that you're sticking with this. It will be so cool to look back on. :)

I may be becoming much sicker than I thought. For here is another one of your efforts that I find myself really liking. Sigh.

It is wonderful! I especially like the water bubbles, they are creative!

Looks good to me and again, I love the saying you chose!

I absolutely love your hand writing! If I have a hand writing like that, I can forget all about stamps.

Well I love your covered bridge Ann and this page! The most important thing is to have fun and you are most definitely doing that.