It's only just begun

If you've been with me for a while then you've heard me talk about fair week. You'll also know that I don't like fair week. The thing is, it's way less work than it used to be in the past. I'm also way older than I was when I first started.

It's basically just a hassle. Hectic and annoying. Add on to that the fact that I have two days a week where I'm a multi purpose employee who is spread way too thin and you've got a week that I want to be done with.

When I first moved here, my ex husband and I took the kids to fair every single day because we're within walking distance and it was cheap entertainment. As the years went by, I started going less and less often. The last couple years I haven't gone at all. Of course, if I go now, I would have to go alone and that's never any fun.

These pictures were from 2017 and that might be the last time I was there. 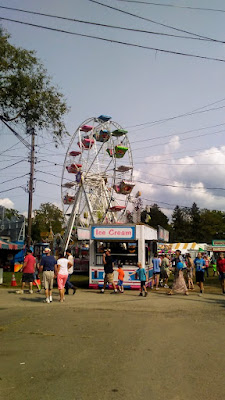 I think I probably went by myself then. Wade was still alive then but he was not a fan of the fair. We would usually go once to get something for dinner and then we would leave. 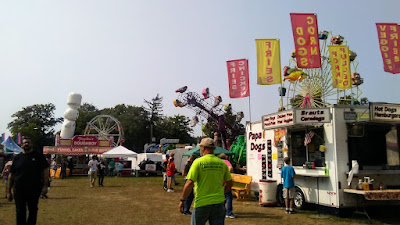 On another note, yesterday was rather gloomy for most of the day. I didn't do much and ended up getting incredibly bored so I did a Walmart trip. After that I came home, ate lunch and then made stuffed peppers for dinner. I bought several peppers so not only did I have it for dinner with leftovers for today but I also put 3 containers of 2 peppers each in the freezer.
I didn't do any crafting because I just wasn't in the mood. I sure hope my motivation didn't run out.
Posted by Ann at 12:30 AM

I just cannot remember why fair week means more work at the store. I am running over the possibilities. Do the fair people come in and buy more things?

I never cared for fairs & circuses. Seen one, seen 'em all.

We used to enjoy going to the fair but for some reason not much anymore. I think it was 2006 or 2007 when we last went. Hope your mojo pops back up soon.

before commenting, I checked my blog to see when the last county fair I went to was. 2010. with bob. we both hated it, 6 dollars each just to get in the gate, 5 dollars to park. Hope you have an uneventful fair week.
where oh where has my mojo gone, that is a song we both sing sometimes. it seems to come and go a lot these days.

We have a Little Italy Festival...when it first started, there were vendors, and old stores downtown would be open...but the vendors were fun. Had all kinds of stuff. Then it went to a few vendors with junk to catch a kids eye...then I don't think there are any now. We have not been since before Roger's stroke.

I worked at a little bakery that made Italian bread and breadsticks...they sure got the business. Relatives that had moved away often came back to visit. And they always wanted our bread. (there are a lot of italian names here.)

I used to enjoy fairs but the older I get, I don't like being around so many people and it is so expensive to go (at least here). Our fair week is actually a month and it is in October because it is finally cooling down a bit. They are hiring up a storm for it. I too am curious why fair week makes more work at the store. More people coming in? I do like stuffed peppers. They are so delicious. Last time we made them on the grill (in an aluminum pan) so we didn't have to heat up the house. It came out so tasty! I'm sure you will get your motivation to craft again when things settle back down to normal :)

I know you hate fair week at work.

I've not been to the fair in years. Hubby and I have no desire to go. It's hot and dusty here. Not fun.

Have a fabulous day, Ann. Big hug to you and lots of scritches to Gibbs. ♥

What a sucky week! I'm sorry you get stuck with so much work.

True, you don't want to go to the Fair by yourself. We were so disappointed that we had to leave Amber and Dylan's and missed out on the Fair in Great Falls. Your dinner sounds like it was delicious.

We have a fair here too every year in August. Went the first couple of years we lived here and haven't been back.
Just the exact same thing every year. I'm not a fan of crowds either.

I've never been much of a fair person either...but ours is a drive to the next town over & then the fair grounds are out in the county. It's in the middle of the heat of summer so that might have something to do with it too. I dunno. My kids may have felt deprived in their childhood but oh well.... I never much cared about that. *lol* If it was within walking distance, I'd probably go to get something to eat, as you said, and walk home again. Then again, maybe not. ~Andrea xoxo

We just had the Fall Festival in the town where I work. Didn't effect me too much though. Rich and I walked around it for a little while but we were pretty bored with it!

Never liked fairs or circuses. My last circus was with my mother when I was about 15 as she loved them. Sounds like you are just so tired your motivation fairy stick hasn't tapped you on the head. I am happy for you that you are getting a much-deserved vacation!