I used up another pack of unfinished Dollar Tree ornaments that I bought last year. This time it's pumpkins.
The first one was kind of an experiment to see how I wanted to do them. I painted them, added the lines and shading then finished them off with a vinyl saying. Unfortunately this first one is a bit blurry. 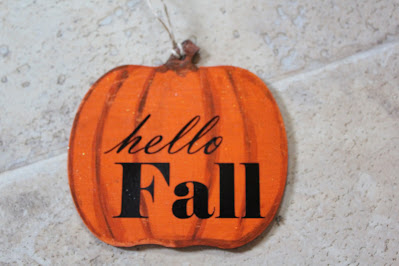 That first one was ok, but I think I did better on the next four. 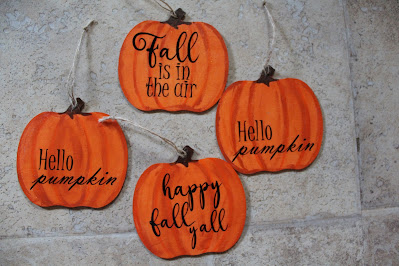 I don't know if you can tell in the picture but there is just a hint of glitter on these. I went over them with an orange glitter paint. It gives them just a touch of sparkle.
Posted by Ann at 12:30 AM

Wow. Your shading work is excellent. It makes them look so three dimensional. Very elegant.

Oh, I so love these. My favorite saying is Fall is in the air...cause it sure is.

The pumpkins are so cute. You did a great job especially with the shading. I love the Hello Pumpkin.

Very pretty! You need to have a small tree that you decorate with all the ornaments you make!

Ann...each one is just purdy awesome!!!

Those would make fun fridge magnets...

I enlarged the pictures but couldn't see the glitter. They are adorable though! I do like them all! I can't tell that the first one is a bit fuzzy; looks great to me!

Those are really cute.

They're so cheerful. A great way to celebrate the season. ❤️

Another great job Ann! Lovely to think it's pumpkin season coming up :)