Well here we are, another Monday. I hope you all enjoyed your weekend. For a change we DIDN'T have to do any running around. We did have plans for Saturday to go to a race but I told Wade to see if one of his friends wanted to go with him because I was just ready to chill out at home.

I don't know where it came from but I got a burst of energy yesterday and once again cleaned out my craft room. This time though instead of just reorganizing everything and making it neat I grabbed garbage bags and started pitching things. I filled one big box with assorted junk that I'm giving to a girl I used to work with. It was a great feeling cleaning all the junk and clutter out. 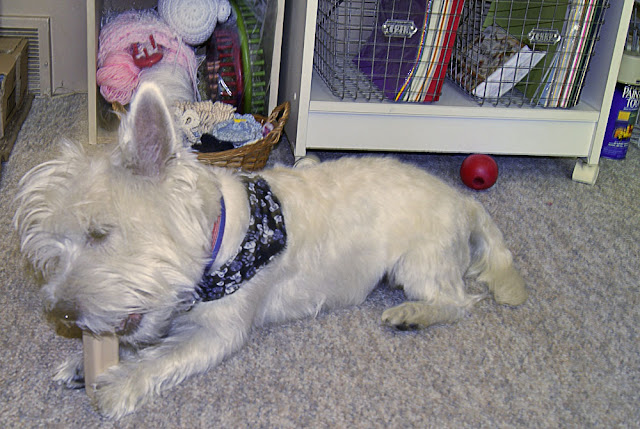 We kept each other company while we were busy.

On another note, my desktop computer is acting up and I have no idea what's going on with it. I still have the laptop and since all my pictures are on a removable hard drive that isn't a problem. But when it comes to putting new pictures on the hard drive I need my desktop. My laptop doesn't have a slot for the memory card from my camera. I guess I'm going to have to break down and tell Wade. I can hear it now "Have you been on Facebook again?" That's what he blamed the last crash on.
Well if I don't have any pictures tomorrow you'll know why.
Posted by Ann at 12:30 AM

Not to be too practical, and knowing you probably have a more super duper camera than I have but...I have a cord that plugs into a usb port and that's how I get pics off the camera - I use the program that came with the camera (a Nikon). I know my camera has a memory card but I'm not sure where it is - never took it out!

hope you can find your USB cord for the camera, it should have come with one.
i am sooooo proud of you pitching out stuff!!! you go girl. and dogs are so much company... this i know. hugs to my Duke man

I'm with Grace--I do the USB port for my photo transfers. I sure hope you get it fixed. It's frustrating, isn't it? My brand new computer couldn't access the internet the other day--just out of the blue. Turns out it was the McAfee that Dell put on all of the computers. They were overwhelmed with calls on Saturday.

Well, since Grace, Sandra and Lin all stole my thunder, I don't have anything to suggest. I am sorry. I know how much you have come to depend upon my guidance. That is, except for when it comes to bacon--much to Duke's disappointment, I might add.

You can also buy a card reader that plugs into your USB port. They aren't to expensive and will allow you to download to the laptop. Duke looks very busy and like he believes what he is doing is much more important than what you are doing.

lol facebook? I guess I should be crashing daily hehe

Awwwwwww, Duke, has anyone told you lately just how adorable you are?

Cleaning up clutter....I do that too, then end up buying more to stash here and there. It's a never ending cycle.

Hi Ann, Sorry about your computer..There is a little adapter you can buy which will allow you to load your photos on your laptop...

Sounds like you had a nice weekend --and really got some work done. We went to Georgia --and had fun hiking. I also had a good time at my upcoming daughter-in-law's shower.

Duke is adorable (tell him handsome). And good for you for clearing out the clutter. It feels good indeed.

Hopefully you can figure out what the issue is. Hopefully it wasn't Facebook (just be careful what links you click!). I'm lucky that I have live tech support living with me. ;)

Good for you for taking that initiative to clean your craft room! I'm with others about the USB cable. I use it with my desktop which doesn't have the slots. Good luck!

Did you download that Registry Cleaner yet? It keeps your computer's "brain" clear!
It's free from Piriform:
It's called, CCleaner.
hughugs

I cleaned out a walk in closet yesterday too and hauled off lots of junk. It does feel good to do that every once in awhile. We pretend we're moving and get rid of the stuff we don't want to "take" with us! Glad Duke enjoyed his busy bone! Those used to keep Sadie busy for about 2 minutes!

I am doing closets tomorrow:) I hope to pitch some things also.I love the little wire baskets and the content look on Dukes face as he chews his busy bone. :)

You're starting to motivate me. :) Sorry to hear about you PC. Hope it all works out. I don't have anything to do with facebook...just don't like it. Hope you had a marvelous Monday!

Ah as long as you have your friend there with you - it will all be alright.

Good job on the craft room! It is so hard to throw things away. You know it has to be done.

I see Duke is enjoying his treat. Is that one of those dental bones? I buy them for Bubba because he's on the prescription food and it only comes in canned.

Gaaak! Hate computer problems. But I love getting rid of unneeded stuff! Good for you!
xo Catherine

It's nice to have a clean craft room. I don't know about you but I can't seem to fine anything after I clean my craft room. so I don't bother to clean up my craft room now. Yes, I'm a messy crafter. :)

I love the way when you get around to doing these huge tasks it feels like a great accomplishment...how long do you think it will last though Ann??

I use a card reader that plugs into a USB port. I need to do that kind of cleaning.