Today I am the messenger boy 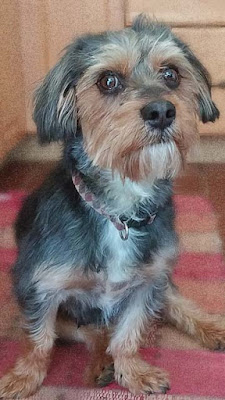 Mom didn't post yesterday because on Tuesday she came home from work and started sawing logs on the couch.  She was acting like she had a rough day or something. Just because her alarm decided to go off 15 minutes later than it was supposed to. It was set right so no clue what happened there. I know it's not my fault I don't even know how to work one of those things.
Then she went to work and had to run back home an hour later to get her finger splint because the cut on her finger broke open and started bleeding a little when she was trying to light a burner on the stove. Don't worry though, it was nothing serious, it's all good now.

I had my doubts about her getting a post ready for today since yesterday she came home from work and went out with her kindle and sat in a chair under the tree to read. I didn't want to see the blog get dusty so I took over for her.

Hopefully she'll get her act together soon. Especially in the crafting department. It's almost the end of the month and she's hardly done anything at all.
Posted by Ann at 12:30 AM

Some days are like that, right Gibbs? As for the dust on the blog, leaving your paw prints help us out a lot. Both her friends in the world of blog AND your 'ma'. Well done.

Hope she didn't get any blood in the cake mix. *kidding

Major holiday to keep you busy.I am helping cook 7 briskets on a major smoker

Yup, we all have days like that.It is always good to take a break. We know she will get back on track soon Gibbs. You are a good boy to take over the reins.

your mom is so lucky to have a pawesome helper like you, Gibbs. :) hope you and your mommy have a wonderful day!
hugs!

you should be messenger boy more often, you write a mean post...that means good in people speak.... maybe mom can't do crafts because of her finger... hard to use scissors and glue with a splint on.. when i saw the title i thought mom had been putting notes on your collar to send you to the man cave and then bring a note back... if she hasn't i mean why NOT?

Loving the photos of Gibbs...

I'm glad you're covering for mom today. She's been a little off since she cut her finger. It happens you know.

Thank Cod she has you to cover for her! What would she do without you? Sheesh!

Oh how I wish I had an assistant like you, Gibbs. Yeah, Grayson and Trixie work what is left of their tails off, but all of their efforts go toward helping Arlynda find more stuff for me to do, which is not helping me at all. Sigh.

You are the cutest messenger I have ever seen!! Poor mom, is her cut healing well? Sawing logs and sitting under a tree are perfect for healing!

Such a slacker! Good thing she has you, Gibbs.

Thanks Gibbs for keeping us informed on the happenings there. Hope your mom's finger is better soon.

Thanks for the update Gibbs, your Mom is lucky to have you to take over when she isn't able to blog! Glad to hear her finger is going to be OK, looking forward to your next report! Deb xo