Who is that guy

First let me say that getting pictures of him was not easy. We attempted sit and stay but he insisted that he needed to be right next to me and I'm talking right in my face so that I couldn't even get a camera in there.

Next we tried to catch him off guard. That worked much better. I still had quite a few blurry pictures but I got enough clear ones to post

When Vicky asked what we wanted done I said just cut him short and clean him up. 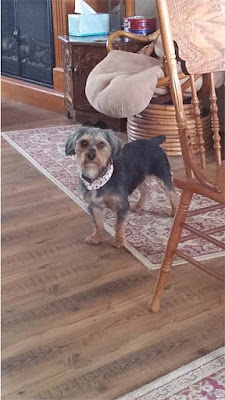 He's nice and soft now and he smells better too. You can see however that he's already gotten him chin hairs a bit dirty. 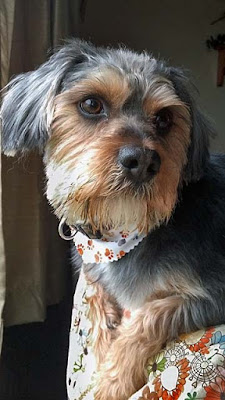 How about a before and after. He doesn't look like the same dog does he? 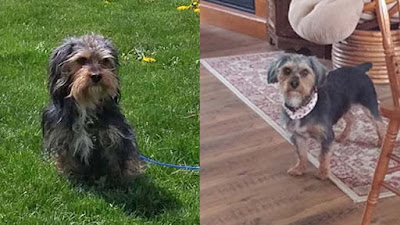 I bet Gibbs feels Good!! Altho, I think his 'before' is cute too!!

Awww! I do think he looked cute before, but he looks very nice all cleaned up! Bet he really does feel better! The girls are going tomorrow...and they will NOT be happy about it. One would think they would be used to it by now...but NO. They still complain every single time. Sigh.

Looks real nice, he is a cutie

Oh Gibbs, you look terrific. You are just so handsome and grown up looking now. As soon as the hair grows out, you will be in the cute stage again. Have a great day.

he will be happy with the hot weather on the way with his nice clean shaved look. i love the scruffy look best. but that is how i like my men, bearded and longer hair and scruffy.. even my movie stars i like i like them scruffy... does his hair grow back quickly? i have never had a dog with long hair or one that had to be trimmed. only bathed..

Awww! He looks cute! And he loves his mama!

All cleaned up and a very handsome pup he is too!

Handsome both ways! What a little lover!
hughugs

He looks much less scruffy but he's just as cute!

he's adorable and extra handsome in the second photo. hugs to Gibb from me!!

The before photo reminds me of one my childhood dogs. He is adorable either way to me. I like the name Gibbs. :)

Oh my goodness! You got your money's worth! He looks fabulous. I'll bet he feels good too.

I love my Gibbs and it is fine his cut for the summer hot days.