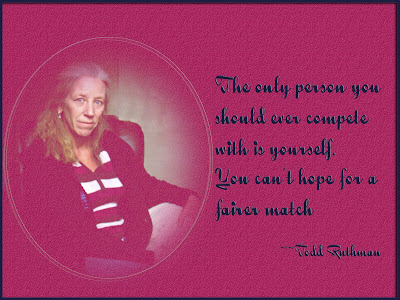 I found this quote and it made me realize something. Every time I get discouraged trying to do an edit or when designing a new kit I'm competing with people who have been doing this much longer than I have. The only one I should be competing with is myself (the fairer match). When I look at it in those terms, I can see that I'm doing pretty well. My skills and knowledge have improved since I first started.

For anyone who is interested, I'll explain how I did the above edit.
First I opened the picture of yours truly. I added a new layer below the picture and filled it with color. (I used the color picker to choose a color from the sweater I was wearing) I then added a texture to that layer.
To blend the picture into the background I made a selection around the subject using the marquee tool. I feathered the selection (100) then chose select inverse and hit the delete key until I was happy with the look. Again using the marquee tool I made an oval selection around the picture and on a new layer I added a stroke outline. I then merged the outline down to the picture. Next I added a bevel and changed the layer opacity to lighten. For the text I again chose a color from the picture and typed in the quote. I also added a bevel to the text before merging all the layers. To finish it all off I added another stroke outline around the entire image on a new layer. Using the selection tool I highlighted the outline then moved to the image layer and hit delete. On the image layer I added an inner shadow.
After doing this edit I realized one other thing about myself. I really need a dye job....lol
Posted by Ann at 10:53 PM

oh Ann I love this quote! so TRUE! i have a problem with comparing myself AND my daughter to lots of other people/children. I need to stop doing it and realize that we are all different!

The quote is wonderful and one we should all apply to ourselves. Love that you explained your edit for others. Uh!- about the dye, yeah. (LOL)my friend