Our tale begins on a cold December morning. Mr. Banana Bread awoke to a new day with little hope for a bright future. It was almost Christmas and he was desperate. 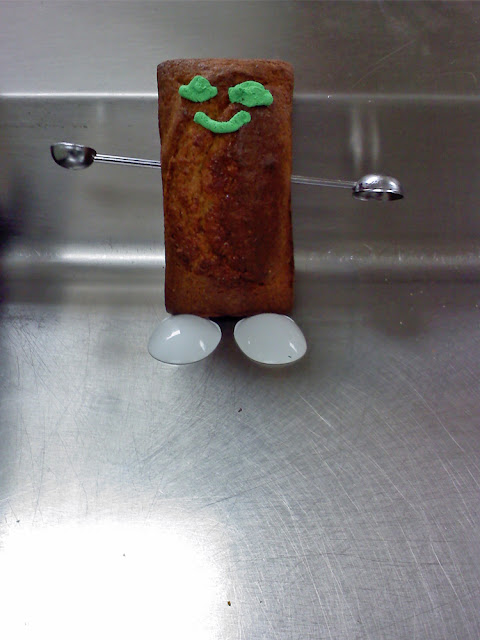 He had recently been burned by a weekend bakery girl and things didn't look good for him. He was out of work and didn't know what to do. He was, however, if nothing else determined. He vowed he would not loaf around. He had several promising leads and he was hoping one of them would pan out. 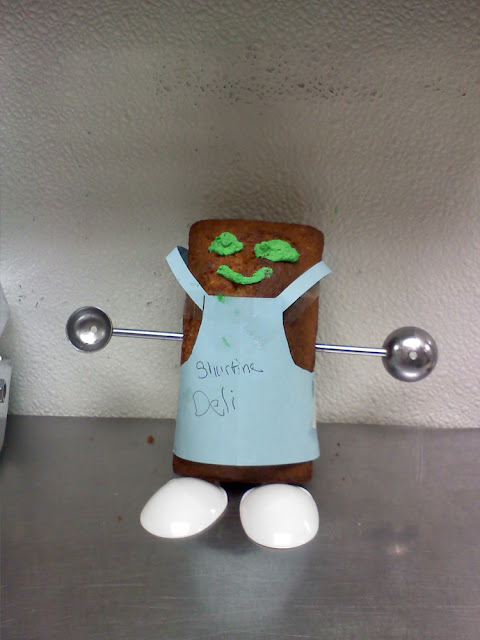 As luck would have it, he did land a position as a deli clerk. Although the pay wasn't so good he was ecstatic. He knew that even with a little dough in his pocket he could buy a few gifts and make it a Merry Christmas for his wife and their 3 little muffins. 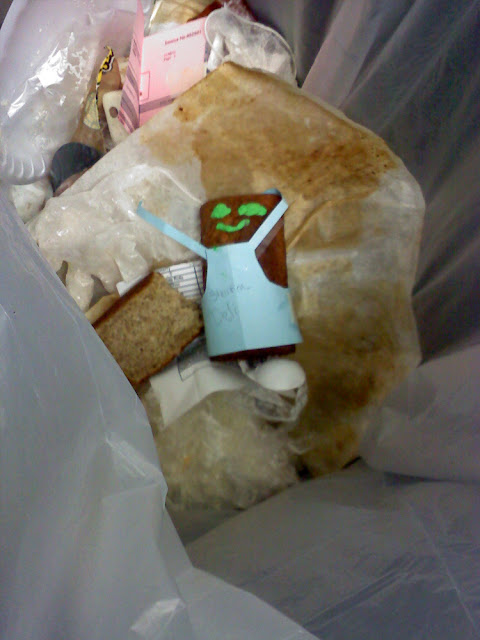 Had he not gotten canned the next day for doing a really crummy job it might have worked out.

Sorry but not all Christmas stories have a happy ending but I bet you did get a good laugh out of it. Don't worry I won't tell Mr Banana Bread that you laughed at his misfortune. I hear he's buried pretty deep in a dumpster right now anyway.
Posted by Ann at 12:00 AM

Absolutely charming my dear,I can almost see another tale.

Loved the story ! I can see Mr Loaf leaving the dumpster and becoming a rock n roll star :lol:

From The Lake Erie Times and Titillations: Local bakery manager fired for publishing how she and her fellow co-workers tortured and cruelly disposed of Mr. Banana Bread while at work. No comment from her former employer. ACLU, PETA and the American Processed Flour Association (APFA) looking to file lawsuit before Homeland Security can place her in a management position oversees.

Not to worry...the Pillsbury dough boy will be right there to fill in for him! Been sniffing lots of flour these days Ann? Bwahaha!!

I need to adopt your outlook when baking calamities arise in my kitchen. Considering the first photo, I think Mr Banana Bread might have had a career in tap dancing. He is (was) a rather endearing fellow! :)

I think someone has a little too much time on their hands at work, hmmmm?

That was funny and ever so clever!

this could be a children s book, I laughed and i love it. great story, great photos, great creativity on Mr Burned Banana Bread. did i say I LOVE IT???? I DO i really do.

And I loved every stink'n second of this tale.

Bwahahahahaha. Where all overdone banana bread ends up...the dumpster. I would have eaten the middle out before the deposit in the dumpster though.

Hahahahaaaa.....omg.....What a Great and Sad tale! Poor Mr B. Bread!
You are such a great teller of tales Girl!!
hughugs

Poor Mr. Banana Bread! It's too bad he got canned for doing a crummy job! I enjoyed his tale though!

bahahahaha....poor Mr. Banana Bread! I hate to admit it, but I am definitely laughing pretty hard right now :)

Now that was hysterical. Poor Mr. Banana Bread. Wasn't his fault that he was burned. Love the story. Take care.

Well personally I feel a little sorry for the guy - it was no fault of his own! Sandie

This was a fun one, even if Mr. Banana Bread didn't make it in the end.

What?! Mr. Banana Bread didn't rise to the occasion???

You're halarious! Definitely could be a book. :)

Oh Ann...you sure know how to brighten a day! That's for a chuckle...even if it was at the expense of poor Mr Banana Bread!

Now I feel bad for Mr Banana Bread. I can't believe he ended up in the dumpster.

Poor Mr. Banana Bread. Be careful or he'll cry discrimination against those who are dark.