Yesterday several of you noticed the cat in the picture behind Duke.  His name was Pringle and he owned us before Duke did. Maybe some day I'll tell the story of Pringle. It was right after Duke's first Christmas, I believe it was either New Years eve or day, that Pringle got outside and never returned. I wasn't real concerned at first because he had disappeared for a few days at a time before. After a week passed and the temperatures had plummeted I knew we wouldn't be seeing Pringle again.

There was also a question yesterday about how old Duke is. He turned 4 in July. I hate to admit it but I totally missed his birthday blog post this year. He forgave me though because I made up for it in treats.

Well it seems that a couple of you suggested yesterday that I only do what's fun and skip the rest. For the first half of the weekend, I pretty much accomplished that. I can't say that there was one single thing I did yesterday that I didn't want to do. Today I have to bite the bullet though and clean the bathroom (YUCK) but, after that, I'm going to only do stuff I want to do.

Finally, and I saved the best for last, Duke got himself all spiffed up yesterday. He thought it best that he looked presentable when Santa comes 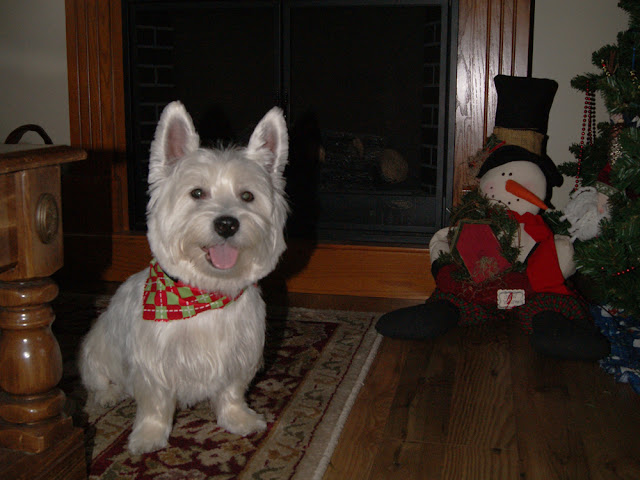 He even put on his happy face for the camera. He's just so handsome.
Posted by Ann at 12:00 AM

Duke looks so sweet with his scarf!

Ann! Duke looks GREAT all spiffed up for Santa!!! The girlz have an appointment at the last possible moment so that they cannot possibly get into any mud before Santa comes!! I am sorry to hear about Pringle...cats do have a way of just disappearing when they want to!

Duke sure does look handsome....and so snowy white. It's a shame about Pringle....but that's the way it goes with cats and I've had a couple do the same...but I always hope that they are out there somewhere and safe.

As for the bathroom...since I had my new one put in I love to clean it!!!

Wow, Duke is gorgeous!! He is so perfect that he doesn't even look like a real dog!!!!

We have the same fear with our house panthers. Funny, back when I have lived out in the country, I never had any fear of a cat not showing up again, but here in the city, it is much different story.

Oh yeah, Duke looks as good as ever. Keep workin' it, boy!

Duke, you are rockin' that kerchief!

Awww...Duke. I hope you get lots and lots of presents :)
Thanks for telling us a bit about Pringle, Ann. So sad he never came back...

DUKE ... you look great and I know Santa will leave you something very special under the tree. Maybe you could also help your mom do some things around the house so she will have more time to rub your belly.

I actually laughed when i saw that SMILE.. so handsome is true and really spiffy for Santa. he is shining with pride in himself, he really is. glad you did some fun stuff. yuck on the BR i did mine yesterday. maybe someone did for Pringle what they did for bob's cat, when we first got married bob had a cat, a big blue no tail, that thought he was a dog. he disappeared and 3 years later we were walking our dog on the next block over and there sat bob's cat INSIDE a neighbors house. seems she 'adopted' him. pringle may be residing with a neighbor.

That may be Duke's BEST picture yet... He knows he's gorgeous!!!!

That is sad that Pringle never came back home... Wonder if someone 'took' him --or whether something bad happened to him... Poor kitty.

Glad you are doing things you WANT to do... That's what it's all about.
Hugs,
Betsy

Sorry about the cat Ann. I can so relate. They do get under our skin don't they.

As for Duke. I'm going to save that picture and then he'll be my Awww...Mondays post the day after Christmas. So adorable.

Have a terrific day (I'm cleaning a bathroom today too). My best to Duke. :)

Duke is so handsome! He's so ready for the holidays! My puppy dogs will be getting groomed this week, by me. Oh what fun it will be. LOL!
I had a similar situation with my kitty, Tigger. It makes me sad to think about it.

Even tho I have nothing to do and no where to go and all day to do it and get there - still there is always something I have to do that I don't wanna...So good for you!

Hiya, Mister Duke! You sure do look spiffy! Too bad you can't learn how to clean bathrooms for your overworked Mom! I cleaned bathrooms today too. Ugh...

We hope someone took Pringle in and he just wasn't able to come back to you. As for Duke he's just as cute as can be in his bandanna!

I finished my Christmas letter finally so now on to the cards, buying and wrapping presents. Ugh! I need another week to get ready for Christmas!

So sad about Pringle. Sometimes they know they are sick and just sort of go off to die. :(

Don't worry about birthdays--I don't really know when Hobbes' is so we don't celebrate. That cat gets enough attention all year to make up for the lost birthday.

Duke, you do look very spiffy indeed. I thought of you when hiking with Corky yesterday. He's a Bichon Frise, not a Westie, but he's a perky little white fluffball.

Oh my gosh - I was way behind on my blog reading! Love your vintage Christmas photos and the one with Duke and kitty - so cute! So sad that little Pringles got lost.

Hope you are taking time to relax Ann!
xo Catherine

Duke you are a rock star in that shot!

Merry Christmas to you and your "Humans".:)

Duke looks like the picture of health - such shiny fur! I bet someone rescued Pringle and gave him a good home.

Duke is looking mighty handsome! So sorry about Pringle - hope he found a home and is living comfortably.

Duke love the camera and the camera love him! He looks like he's waiting for Santa. I know he's been a good boy.

How handsome and he doesn't cry like children do for Santa.

How could you forget his birthday girl? lol