A hooter and some men

Gibbs says I can  now show you what I did on Monday.

First I attempted to make more of the owl tealight covers. At one point you have to remove the hoop from the machine and put a layer of felt on the back of the hoop so that it can stitch the two sides together. While I had the hoop out I trimmed some threads off and when I went to brush off some small pieces I knocked the whole thing out of the hoop. In order for it to stitch correctly it needed to be put back in the hoop in the EXACT same spot it was in. I got it pretty close  but it was off by just a smidge. 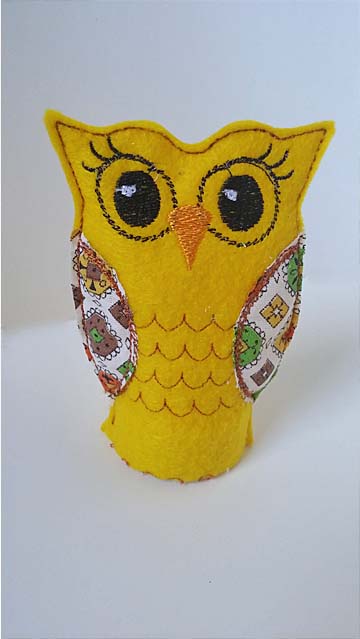 Instead of doing another owl I chose to do some snowmen. Same thing, at one point you need to remove the hoop from the machine and lay a piece of felt on the back of the hoop so it can stitch the two layers together. The back piece of felt folded over on me so in one spot it had a triple thickness. Then when I did the hats I put the back layer on too soon and stitched the bottom of the hat closed. All things that could be fixed but they annoyed me. 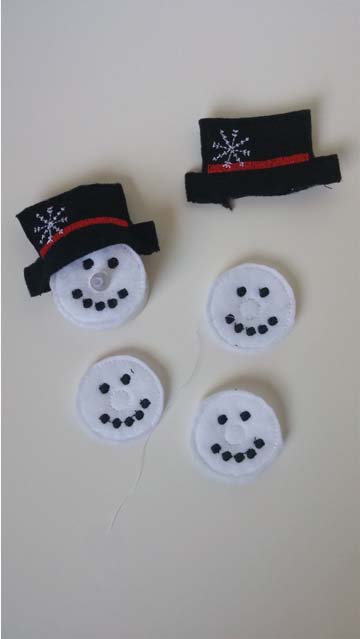 Here are the two options for the snowmen. One with the hat and one with the earmuffs. 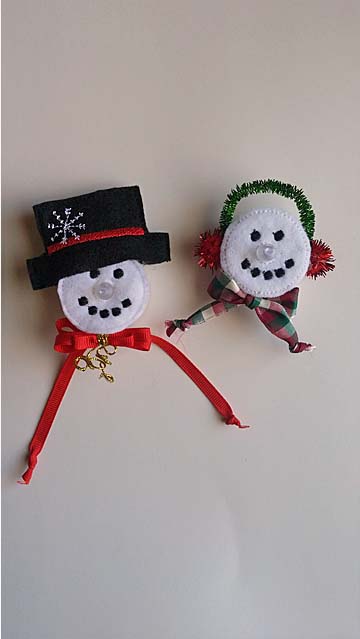 Lastly, after coming home from my disastrous haircut I decided I was going to make some sock snowmen. They turned out pretty cute. 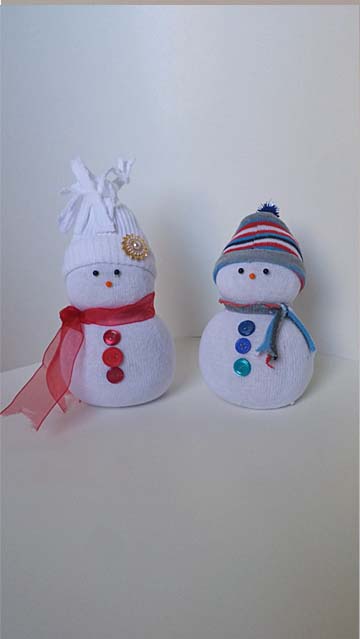 I wish I would have had something different to use for a nose but the pins worked well enough. These are filled with rice and I only had enough to make 2. Now I need to put rice on the shopping list
Posted by Ann at 12:30 AM

The tiny snowmen are adorable, I LOVE them! I like this owl better than the first one, and thought it would be my favorite, but I think my favorite are the cute little snowmen with the pin faces. Will you be selling them?

I like the new snowmen, the sock ones are fun.

I can't decide which one I like best, the muffs or hat, they make an adorable couple so I say do sets like these.. the owl is so cute and when you described all that went wrong I started to shiver and shake from frustration. if I were doing it they would have been ripped in half or cut to pieces and in the trash can. I have zero patience when things go wrong... love the rice guys

The snow men are adorable ,love the owl too! Great projects :) I'm still waiting for my hair to grow after it was cut too short 6 weeks ago!

So cute, so very cute. You are so talented.

Have a fabulous day Ann. Big hug to you and tons of scritches to Gibbs. ♥♥♥

they are all adorable! the last two are extra super cute to me! I would have to buy them!
I was downtown Apex last night with my son's gf and we went in a craft store. the owner was in the back working at her sewing machine while we shopped. she and I talked a bit and she told me that some of her items are on consignment by other local crafters. I told her about your talent.:) one thing she had made were tiny reversible aprons. they were so cute!!
sorry about the bad haircut. I usually just get a trim, nothing too fancy and I've had people mess up. I've been cutting my own hair for the past two years. :) I should probably see a professional soon. lol

Oh my word - I love all of these. This owl is much more better than the first one - I guess it's the colors. The little snowmen pins? Fab-u-lous. Would make great winter coat pins. If only there was a way for you to make a bunch quickly and then have somewhere to sell them right now. The little snowmen are cute - you've got a thing for snowmen as I recall...All of these are so sweet and fun! Damn!

The owl looks perfect to me and I adore your sweet snowmen!

So cute and I can't see where the owl got messed up? Love the snowmen with the earmuffs and the sock snowmen are adorable too. I often used a round toothpick painted orange for little snowmen, you can get two noses by cutting the toothpick in half. Cheap and easy ☺ Deb xo