Well that was just not nice of me at all to tell you the other day that I had 3 new craft items to show you and then disappear for a day. I was in a bit of a mood Tuesday night and didn't realize until I was at work Wednesday morning that I had never scheduled a post.

Without further ado I'll show you the next item.

This was also a screw up and after the picture I'll tell you what I did wrong on this one. 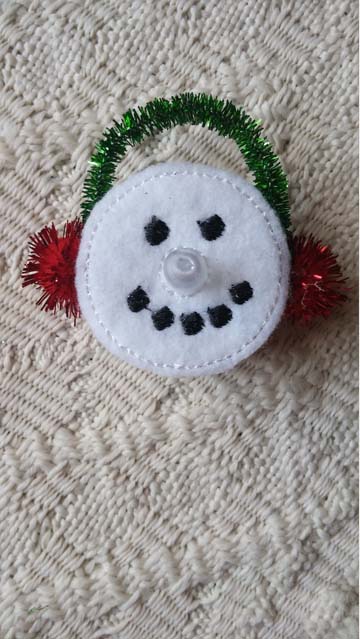 Technically he's perfectly fine the way he is but he wasn't done correctly. You're supposed to put a second layer of felt under the hoop before you stitch the outer circle. I was in a hurry and forgot so he's single layer instead of double. Not really end of the world. Since he's not done right I decided not to make the black top hat that goes with him. Instead I gave him some ear muffs and I think he'll be an ornament instead of a pin.

The nice thing about this embroidery file is that he comes with the option of stitching 4 faces at the same time so I can get more of him done in less time. The hats however have to be done one at a time.
Posted by Ann at 12:30 AM

He is a cutie!!! Seems no one would see whether he is double or not? It would just give him more weight.

I don't understand where that second layer of felt is supposed to go - wouldn't it block the loop? Or was the loop your addition to make him an ornament instead of a pin? I like him with earmuffs - more color and texture.

What a cute little snowman ornie with ear muffs! Hope you get lots more made!

The ear muffs are a great idea!

I love the ear muffs and like that better than traditional top hat.. he will make a great ornament... keep stitching, we are waiting

wonder if you could glue them onto a bottle cap?!!

I like this, not sure he even needs a hat.I could see it as the main theme for a tree.

Have a terrific day. Big hug to you and lots of scritches to Gibbs. ♥♥♥

I think the ear muffs are super cute! Great idea to make him an ornament!

Both are cute as a button!

Love the ear muffs on him. Can't wait to see one with a top hat! Very cute, Ann, you are working up a storm on your embroidery machine!!

this snowman makes me smile! :)

Don't point out mistakes . . . he is absolutely adorable :)

Cute!! I love the earmuffs!!