Hanging on to memories

A while ago I had been talking to my daughter about wanting to really declutter my house. I said that I wanted to get rid of everything that I didn't either use, need or love. I told her that there were some things that didn't fall into any of those categories but for some reason I wasn't able to throw them away. I went into the other room and brought back an example of something I couldn't seem to part with.

I told here I still had these cups that were ugly as sin but because they were made by her and her brother I couldn't part with them. Turns out that she actually made both of them and told me to toss them. I offered them to her but she said that she didn't want them. 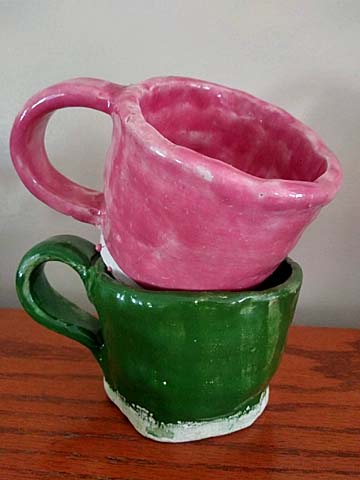 A week or so later she came over and looked at the window sill in my kitchen and there sat the two much stacked like they are above. She looked at them and said "You still haven't thrown those away?" 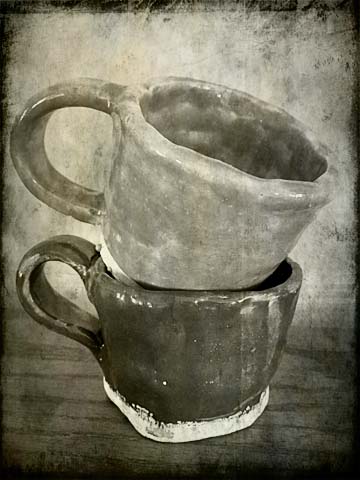 So there they sit, they are ugly as sin, she's given me permission to part with them and yet I still can't seem to throw them out.
Posted by Ann at 12:30 AM

I couldn't part with those Anne. I think they are brilliant. I can see them with a few flowers in.
My son made an owl out of clay when he was small and I threw it out. I can't tell you how much I regret doing that.
Briony
x

I couldn’t part with those either, Ann. I’d use them in my craft area to hold something. I have every piece of clay pottery that Bryan made us. One piece holds my markers, one is in the guest bath to hold toothbrushes and paste. Others are holiday related and still come out each Halloween and Christmas! Some things just need to find a place in our homes forever just like your cherished mugs!!

I need to send you some of my dna…. I keep nothing, they would have been gone years ago. I never kept anything longer than to let them know I liked it and then it was gone, that said, if you like to keep them keep them, you could make planters out of with real or fake flowers for the window sill...everyone is different and I say if it makes you happy keep it... my problem is I cherish nothing. and that is a problem... of a kind anyway

No, no, no no - Keep them, absobloominlutely! There is another category you left out - "heart" stuff. Not love, but heart. Soul stuff. Connection stuff. Smile stuff. Happy stuff. Just Because stuff. These cups fall into those categories - all of them. Make them useful if you must rationalize a reason to keep them - as DebbieM said, put them in your craft room and fill them with the bits and bobs you use - paperclips even. And I'd be willing to bet, that Amanda secretly was delighted that you had them still. Some things don't need a reason - somethings, and feelings, just are!

You're crafty, so make them beautiful. Just saying. I wouldn't throw them out either. Such treasures.

Have a good day, my friend. I send you big healing hugs wrapped up in love. Scritches to Gibbs. ♥♥♥

Yes, they ARE ugly. But your daughter made them when she was a little girl. No mom could get rid of them. Plus, the way they look stacked now, you have created a sort of primitive mug totem!!!! And it looks kind of cute. You are creative to the bone!

This is also a good idea of Sandra's. Put flowers in them! That would be real cute!

Yep. I've got a bunch of those myself...and I cannot toss them either. Both of my kids took pottery classes and I have saved some samples. I don't think you can always categorize easily. I think some things have to stay for now if you can't make an easy decision. There is plenty of time for that later. The only time this is a problem is if you are saving too many things or those things out-number what you are getting rid of.

Be easy on yourself. Not all decisions--large or small--need to be made immediately.

They were made by the sweet hands of your daughter . . . that makes them beuitful. Maybe our brain doesn't see it, but your heart does.

PS I looked at them again and I think they're kind of CUTE!!!

It doesn't look like that will happen. I've been using one for rinsing brushes in my craft room

I've actually been using one for my glue brush when I've been working on the glass jars. Looks like they're staying

So you think I should keep them then?....lol Looks like they're staying.

yep, that's what I'm gonna do

I've been fighting with myself over these mugs for years. I can't tell you how many times I thought of tossing them. They have different plans though and it looks like they're sticking around for a while

I don't think their that bad! You could plant some little plants in them or something and/or repaint them too. I have similar pots my son made and they are way more hideous!! I can't get rid of them either.

Glad you're keeping them for now. There's a whole lot of other stuff in a house to get rid of before getting rid of something that still tugs at your heart. I heard once that we don't have to keep everything in physical form because a photo of the item will evoke the same memories as the item itself, however, those can be useful in your crafty stuff so that puts them in a different category.

They look like a craft project in the making. If you can't toss them, make them into something shabby chic to sell.

I probably couldn't get rid of them either. I've heard that taking pictures of things lets you hold on to them in a different way. Not sure that would be enough for me but I plan on trying that someday.

I think they are charming and I wouldn't throw them out either. It's funny sometimes what we value. I have this Ceramic Dog that my mom won at a card game when she was first married to my dad. Everyone says it's "ugly" and mom was going to sell it in a yard sale when I snatched it up. No way was I parting with that ugly dog. - I like your BW edit, very artistic looking.