Yesterday was Wade's birthday. His two daughters and their kids came to spend the afternoon with him. We ate, we visited and there was a whole lot of swimming going on.

We also had lots of cake. I made one for him and his daughter also brought one. This one will go to work with him on Monday. I told him he had two choices, eat the whole thing himself or take it to work to share. Otherwise it will sit here and get moldy. I did have one small piece of the cake his daughter brought but that's enough for me. I'm sticking to the diet 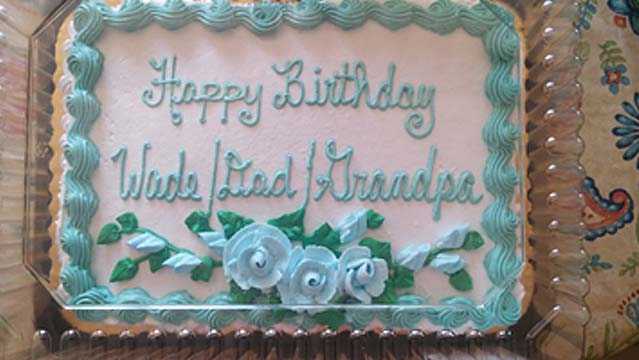 As for the resting part. I had to take a day off from the exercise and walking to recuperate from what I'm assuming is an over strained muscle.  Gibbs is resting after spending an afternoon of being chased by 4 little kids and swimming. He now has a new appreciation for living with old boring people. Seriously though, he did enjoy himself and was a very good boy for not being used to being around little ones. 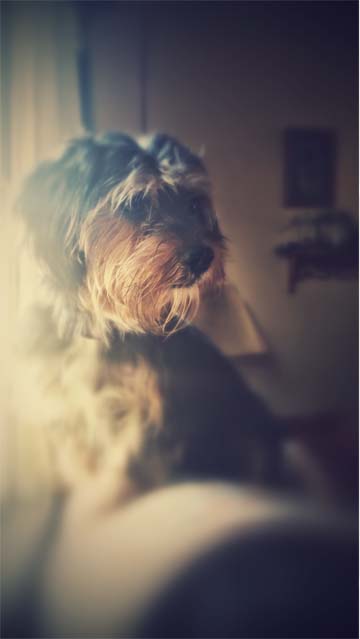 Good work avoiding the cake. That is hard to do. Sounds like Wade had a good day. Have a great day.

It can be hard when not used to kids, so good job Gibbs. I would eat a piece.

That cake looks so good! I tell my husband to take stuff to work, too! As a matter of fact, I make him put it in the car the night before! That's how much I don't trust myself! Gibbs is such a good boy and cute too!

I am sitting at Tire Kingdom waiting on my tire to be put on the car. Love the birthday cake and glad I didn't get to cuz I would eat them both. I do love that picture of Gibbs awesome. Jake got in a fight with raccoon this morning and hurt himself he's on a pain pill

I'm glad you all had a great time. Gibbs did very well with little ones. They don't always mix well.

Have a fabulous day my friend. Big hug to you and lots of scritches for Gibbs. ♥♥♥

Sweet little Gibbsy. Where is the muscle? So sorry. Ibuprofen is good for the inflammation. Is this the cake you made? I am assuming it is because of the expert and beautiful decoration. You know your bakery stuff for sure. Do you decorate all the cakes at the bakery? Makes my fingers hurt just to think about it. You have a lot of willpower! I can never photograph cake through that plastic top, too many reflections. You did a fantastic job!

Happy belated birthday to your Honey and IF he doesn't eat the whole cake, Could you...would you...mail me some of that cake????? I too am proud of Gibbs..people just don't understand that dogs need to become acclimated to little ones. One of my grand daughters bugged Copper so much that when he snagged at her, her Dad got mad at Copper!!! Really????...:)JP

Bet he was tuckered by the end of the day.

And good for you....sticking to your diet. Just don't become skin and bones anorexic now!!!

Happy belated birthday to Wade! I haven't got any cake yet and he got two whole cakes? Whoa! I see how I rate! LOL! Actually, I was happy with a lemon bar so all is well.


Gibbs is adorable. Did he get a piece of cake? It was sweet of you to bake two cakes and buy one on top of that. Whether they admit it or not, it goes a long way when people know someone cares enough about them to do all you did.

You deserve a rest. I hope your overstrained muscle gets better real fast. Tell Gibbs hello and a pet and again I hope you feel better.

Happy birthday to Wade! What a lovely cake!! Aww... Gibbs :)
My cats don't like small kids at all...

Happy Belated Birthday to Wade... I'm sure he was happy to see his kids/grands... BUT--Poor Gibbs.... I'm sure he needed a long nap after everyone left!!!!! ha

Don't punish yourself when dieting.... IF you wanted more cake then eat another piece... We DO have to live forever --and we can adjust calories/activities for special times and foods.... I have learned to do that.

Belated birthday wishes to Wade! I applaud your willpower in refusing to eat a lot of cake.
And applause too for Gibbs for playing along so well!