I'll have to take care of the blog since obviously some mommy isn't going to do it. She should have been posting to tell you all about her craft show but she's got some lame whiney excuse for why she didn't. 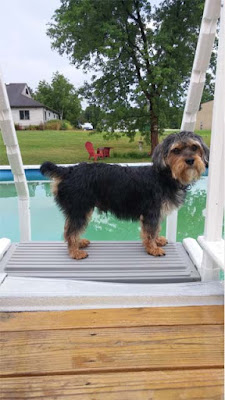 She says that both Saturday and Sunday she was just way too tired. They were both very long, very hot days and when she got home she just wanted to get a shower and go to bed.

Yesterday was her day off so you think she would have gotten around to doing a post but nooooooooo. She unloaded all the stuff from her SUV and then since it was such a disaster she spent ALL day long cleaning and reorganizing her craft room. I'll admit it does look really nice in there now except for the closet. If she keeps the door shut no one will ever know. She says that's the next project. I think the next project should be a walk and a game of fetch.
Posted by Ann at 12:30 AM

Hi little Gibbsy! I love it when you post. You are very good at this. Tell your mom that a nice organized craft room is much better than one night of posting.

How could she resist you? We agree....she got a clean craft room so you deserve a walk and to play fetch!

Hey Gibbs! Hope you are looking after your mom! A walk would do wonders to cheer you all up!
A craft room tidy up can wait! Oops, that's just me the procrastinator!

you look like you are ready to dive in and be in the olympics this week. glad mama got her room straight . and that she let you do a post. good job Gibbs

Can't believe you both aren't in the pool

Last one in the pool is a rotten egg!!

A clean craft room sounds good :)
You're looking adorable in the picture, Gibbs!

Love your post Gibbsy. She needs you around in the house more then you think. We will tell her as she I am sure reads the comments.

You have had your rest lady get the leash and the ball and get going and give Gibbys some exercise.
Of course pick a cooler day. If we ever get a break to cooler.

I'm sure she'll get around to you soon. Those craft shows are hard work. Give your mom some slack.

Dear Ann, if you don't want us knowing that your closet is a mess, you better keep Gibbs always from your computer, LOL.
Have a great week and get some rest after that long weekend.
Connie :)

As much as I am looking forward to hearing about the craft show I can bet your Mom was super tired, probably still is today come to think about it. So big deal, you have to do the blogging today, give Mom a break here.

WE sure understand being tired and we know she was after the craft show. So Gibbs, take a little easy on her. You sure are looking good.

Tired and hot is an excuse our mommy uses too. Whatever.

Walking and a game of fetch sound like much more fun than closet cleaning Gibbs! Hope your Mom had great success at the Market. Deb xo