Yesterday at work I was pulling the frozen dough that would be used today. I pulled out a new case of petite cinnamon rolls and opened the box. This is what I found in there. 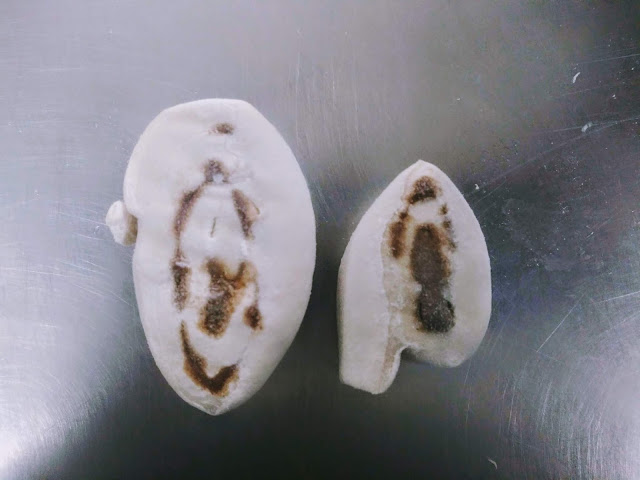 The one on the left is the size the rolls should be. The box had a lot of rolls that looked like the one on the right. In the past I would get this kind of inconsistency in size and when I questioned it I was told that the company says they are withing specs.
I decided to see how much difference there was in weight. The one on the left weighed .09, the one on the right weighed .05
I made a call to the warehouse and told them about the issue. I was told they would issue a credit. I asked if they needed me to return the case and I was told no. Looks like some of us are going to be getting some baby cinnamon rolls for a treat this morning.
Posted by Ann at 12:30 AM

Their quality control is awful! But then again, it has worked to your advantage, YUM!

It amazes me the difference. Now, my question...are there two sizes you can order (and the error in shipment)? Or are the bakers so unaware of what they're doing?

Needless to say...put the teapot on the burner...I'll be there in a jiffy.

wow, that is a big difference. I have been fussing about how things are getting smaller and costing more. this takes it to a new level. you could sell them two for price of one as mini cinnies.. agree with annie about whom is doing what... I have bought Arnolds Rye bread for many years. the loaf I bought last week, is a third shorter and the bread height is so much smaller it disappears in the toaster and I can't get them out... plus it cost more

Well at least you got a credit. Looks like this is happening more than not. Sigh.

Have a fabulous day, Ann. Enjoy your day off tomorrow. Big hug to you and tons of scritches to Gibbs. ♥♥♥

That's almost twice the size! How'd that make it through quality control? It's good you got credit for them plus get to enjoy them!

Huge difference, good for you for making them accountable with their product.

That's what I say too, awful quality control. Glad I didn't have to send the case back

No there is just the one size. They are supposed to be the size of the larger roll. This seems to happen a lot and like I said they use the excuse that they are within spec. I think they need to tighten up the margin there because this is just too much of a difference

Yes, this company seems to be getting pretty lax

That's what I said too. It amazes me that they find that big of a difference acceptable

Good for you for being persistent -- they do sound good. :)

Where is quality control?? Hope your enjoyed them.