Yesterday after I got out of work Duke and I went for a little ride. 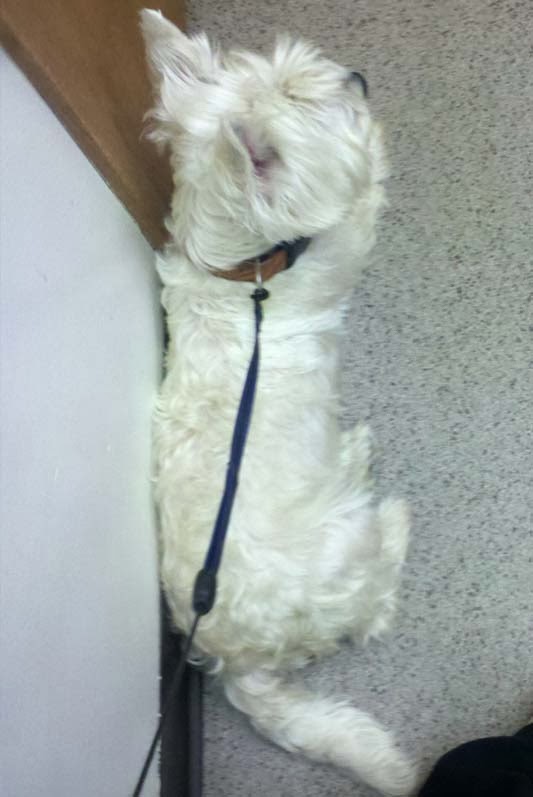 He's had a bit of an itching problem and all my efforts to help the problem were failing. He got a nice little bag of goodies to take home and I got an empty wallet. 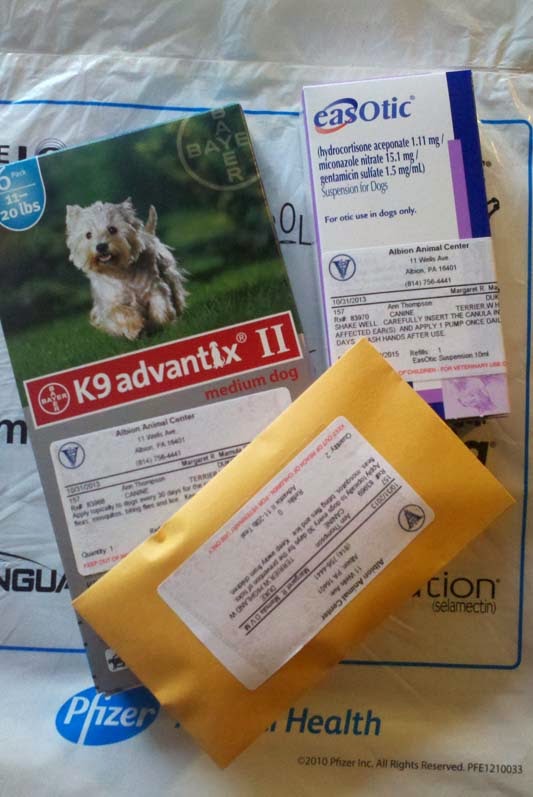 He was also due for his rabies and distemper so he got those two shots. Turns out he also had an ear infection so he got a prescription for that. I was out of the flea prevention and they had a deal where if you bought a 6 month supply you got 2 months free for $69. Total bill for the visit was $249 and change. I guess I won't be shopping this weekend. He was supposed to go to the groomer tomorrow but I called and asked her if I could change the appointment. My checkbook needs a couple weeks to recover.
Posted by Ann at 12:30 AM

It is a really good thing you took him when you did, seeing that he has the ear infection!

I think that Mr. Duke needs to go out and get a job to pay for those bills, LOL! I hope he AND your wallet are on the mend soon.

OMG -- the scratching and itching has hit here too with the dry weather. With our vet's okay, I give our two an antihistamine when it gets really bad!

....but considering it's all for Duke...worth every cent.

i can relate, Baby cost me over 200 in Feb and Jake the same in May... i am thankful they go at separate times. it is the 6 months supply that is killer, but the 6 months is only 3 months for 2 dogs, and they way 50 pouns each, so i have to spend a fortune. so sorry Duke has the ear infection and is scratching.. poor little guy and poor you with nothing left in your wallet.

Hope Duke recovers quickly from the ear infection - and your wallet, from the knocks! ;)

But aren't you glad there was nothing seriously wrong and he'll be healthier and happier? Of Course you are! - Be thankful you have just the one...2 cats to the vet - just for a check-up? You don't want to know....

At least now he'll be all better and that's priceless! Pretty cool his picture is on the box too!

Yes, but Duke is so worth it. You already know that, but had to say it anyway. Our Little Bit is very expensive too. She has allergies and gets two shots every month. They are expensive, but they make her more comfortable.

Have a terrific day Ann. My best to Duke. :)

I usually spend over $600 for my three. :) They're worth it, but still an empty wallet isn't fun. lol

That is a lot of moola per pound of Duke.

People who don't have pets don't realize how EXPENSIVE pets can be. BUT--they are worth every penny aren't they??????

Yeah, it's a killer, but look how much love you get for that money you spend! He's such a sweet little guy...and so cute...

You can buy insurance

I hope Duke will feel better soon and your wallet recoups too.

Ann - are you part of my Facebook page WESTIES HEALTH -- FROM EARS TO TAIL?

Oh Duke! I feel your pain! I hate that place, especially when I have to spend the night. Bad experience all the way around.

I also feel your pain with the itching. My mom brings me home allergy shots (mean mom!) and sticks me!

But she has found something that makes me feel so good when I go through my itchy phases. She about a half cup of real oatmeal in about 2 cups of water for lots of hours. Then she takes me to the laundry tub and rubs the oatmeal water all over me for about 10 minutes, followed up by an oatmeal shampoo bath. Then she rinses me really good. It really helps my itching and she said that it gives my sores and skin a chance to start healing.

Never have I met a vet that did not empty my wallet. Hope Duke's itching goes away...poor little dude.