I've thought about it for years and finally I decided to give it a try. I don't know how long I'll keep it up but I'm going to make every effort to get through the whole year taking at least one picture a day.

Rather than post one picture every day (because sometimes the picture I use isn't from that particular day) I'll be posting once a week. My week will start on Sunday so to begin with I have the first 3 days of 2015. 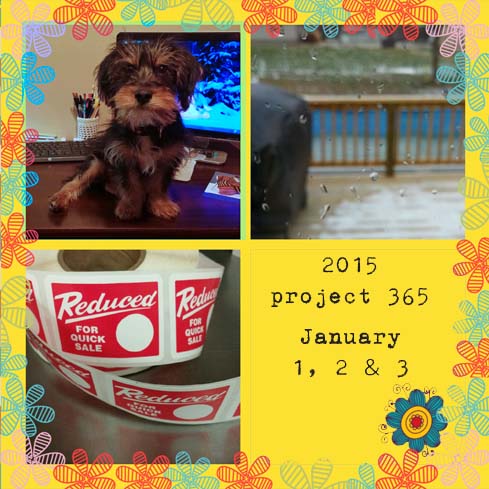 January 1st-While I was trying to do some blog reading Gibbs was being very insistent that I pay attention to him. I put him on my lap and he immediately climbed up on the desk. He did eventually lay down but firs was kind enough to pose for a cute picture

January 2nd- This picture of my roll of reduced stickers at work was to remind me that there may be some days that I'm reduced to taking seriously silly pictures but so long as I take at least one a day I'll make it through the whole year. After all this isn't about quality so much as it is about picking up the camera and taking a picture.

January 3rd- I had intended to get up early and head out to do my weekly shopping but unfortunately I procrastinated too long and it started raining. After reading the weather warning about freezing rain I chose to skip shopping and took down my Christmas decorations instead. The picture is the raindrops accumulating on my sliding glass door
Posted by Ann at 12:30 AM

I like how the collage shows your week! So will you only be posting once a week then? Or do the weekly collage in addition to your daily posts?

That's a cool project! We've had freezing rain since a week now.
Gibbs looks as cute as ever :)

A great idea to consolidate. Now if only I could take one pic a day!!...:)JP

good idea on the one a day, but i need to make a resolution to take ONLY one a day, i take 10 to 50 every day of the year. i have never had a day I did not use my cameras.
could we have a post on HOW that tiny dog got up on the desk>? is he part cat? did you put pillow stairs there?

That is such a great idea. This will be fun to see. It is fun to take pictures. I love doing it. Have a great day.

Sounds like a fun challenge! Can't be too tough knowing you always have a cute little subject at home! :)

I really love this idea Ann. Especially the posting once a week part of it! I'll be looking forward to these!

What a great idea. A year in pictures. I'm sure there will be lots with Gibbs.

Hi Ann, I will be looking forward to your photo collages. Your new puppy looks like he has already become a big part of your family. He is so cute :)
Keep Smiling,
Connie :)

Hmmmm...this is gonna be fun. I can't wait to see what the year in photos brings! Lots and lots of Gibbs. Hooray!

Having to wait for a weekly post will be excruciating, but I will endeavor to persevere.

The decorative frame makes it all work together. Some days are a lot like a reduced price sticker.

I'm so glad you are doing this. Stick with it and you will have so much fun looking back at the pictures. It's also a great way to remember when you did various things.

This project is a good way to document the year. I'm glad Gibbs is starting to worm his cute little way into your heart. He's adorable.

Good luck with your project! I'm looking forward to seeing your pictures! Especially of the adorable Gibbs.

Good luck Ann with your 365 project, I admire your commitment! You can always take a picture of Gibbs if you're stuck, he's so photogenic☺