It had a happy ending

The other day I was walking towards the sliding glass door. I saw a couple birds flying towards the house. One flew up over the roof and one flew right in to the window. I saw it drop to the deck. I looked out on the deck and it was laying there on it's back. 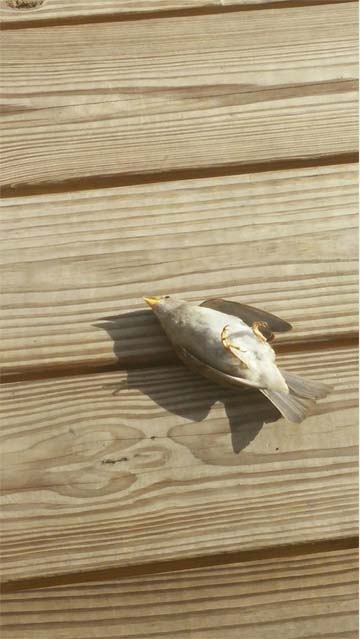 Naturally I call for Wade because I'm not picking up a dead bird and I don't want Gibbs getting it and bringing it in the house.  While I was closing off the doggy door so Gibbs couldn't get out I noticed it was still breathing. Wade picked him up and put him down in the grass near the feeder and we hoped he just had the wind knocked out of him. 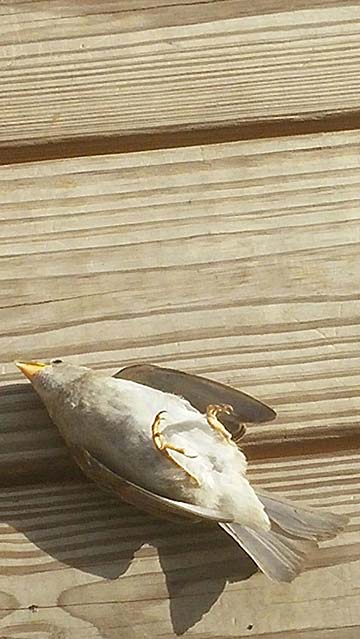 Thankfully when I looked out a little bit later he was gone. I hate it when they fly in to the windows like that but at least this one lived to tweet about it.
Posted by Ann at 12:30 AM

A happy ending in a situation like this is always good. I'm glad the little bird turned out to be a tough little one.

Thank goodness! I don't know why but some birds keep flying directly into my office window :-/ I pulled down the blinds half way - hopefully this will keep them from doing it again.

It happened to me once too. The bird just smack on to my window panel. I cant reach it coz roofing matter. I saw it was still barely alive. Was so worried. Then a bunch of nirds came and peck it. It suddenly "woke up". Later on it flew away

It is a sound I hate to hear, but have a fairly good survival rate.

so glad he is still tweeting, in 26 years here we have had 3 birds do this and they all lived to...

He's a pretty little bird - if not too bright. Glad he lived to fly another day.

Glad he was okay! Kinda funny you thought to take a picture of what you thought was a dead bird. :)

Have a fabulous day my friend. Big hugs to you and my very best to Gibbs. ♥♥♥

That sure was a sight to see! Happy the bird was able to recoup and fly off!

Oh, thank goodness! They hit our family room window all the time and it is the rare occasion that they don't recover.