Not much of a swimmer

Wade had been hoping that Gibbs would follow in Duke's footsteps and be his pool partner. He kept threatening to throw him in and the only thing that saved Gibbs from that fate is that I wouldn't let him do it. He did carry him in though and Gibbs will swim but he's not in to it like Duke was. 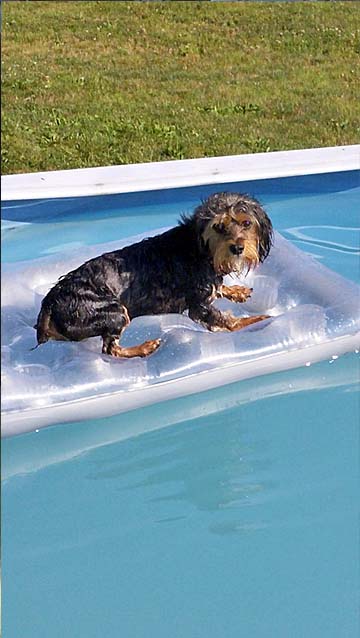 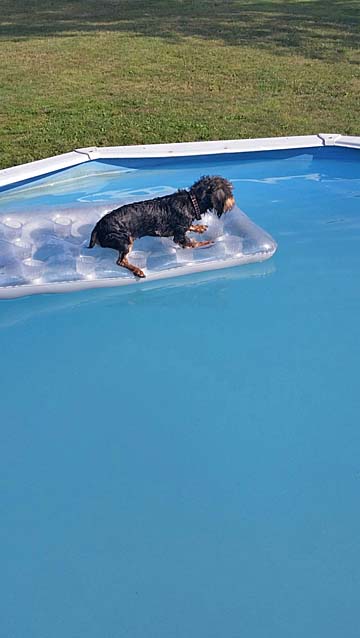 Lily loves the water where Daisy doesn't have the same passion.Lily would rather be in a lake or pond rather that the pool, but wants to use me as a raft.

The large plant behind me in my last post is called a Compass Plant.

Haha. You caught the "I'm not sure I like this" expression perfectly!

I guess just like people, some dogs love to swim others don't! I like being near water, but not in it ;-)

Awwwwwww, such a sweet sweet dog. That face would melt the heart of an mean ogre. I love 'im!!

Maybe in time, he'll learn to enjoy being on his raft. Who knows.

we had one dog that was a water rat like Duke was, the other 3, none of them could swim and hated the pool... Gibbs looks like OH NO, what i do wrong to be put adrift

We think Gibbs prefers being with his mom instead of in the pool with his dad! By the way, all the tomatoes in our post today are from our garden. We kinda planted way too many tomato plants! Lots of salsa though!

Some dogs are water dogs and some aren't. It's just the way it is.

Have a fabulous day Ann. Big hugs to you and tons of scritches to Gibbs. ♥♥♥

Gibbs doesn't look too comfortable. At least you saved him from a dunkin'!

Ande never liked swimming either. Guess it just makes Gibbs nervous.Maybe he will get used to the raft idea. Have a great week end.

I was always amazed at how much Duke like the water...it's obvious that Gibbs is a bit more of a land lover!

You do realize that Gibbs now has photographic evidence to use against you in court--right?

Oh Gibbs, you don't look real happy buddy! Our big guy was terrified of water at first, but now is a confirmed water dog and loves swimming so don't give up yet, it may grow on you!

Gibb, you are not a lone, I can't swim either.

Oh my he does look a unamused here. Well at least he gave it a good try.

AWW! Soaking wet he's still cute! I hope he gets used to it!