No, not mine. I'm still going strong. Perhaps on another post, I'll tell you a little bit about what's been going on this past week.

Wade was always keeping an eye on the weather and several years ago for his birthday, I bought him this weather station thing to put on his desk. Nothing fancy just something that told him what the temp was and a few other things. I looked at it to see what the temperature was and I'm pretty sure the little box that hangs in the tree out front to give the outside temperature is in need of some new batteries. 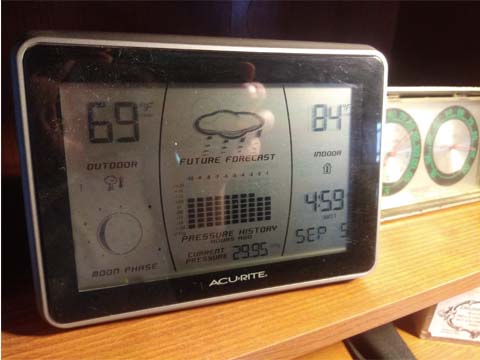 I believe that it's 84 degrees in the house but there's no way you can convince me that it's 69 degrees outside.

This little gadget he had long before we were married and it appears to still be quite accurate. It had the temperature at 82 with the humidity at 88 %

I'm so ready for some cooler weather. According to the weather app on my phone starting today the temperatures are supposed to be cooler. The next 4 days has the highest temp at 77.
Posted by Ann at 12:30 AM

I like your weather gizmos! We just have a big thermometer hanging outside on the porch post.

I have the weather on as I type and we are in our typical watch the hurricanes Sept mode. hot, humid, storms, 4 of them out there.. no hope for our temps for about 6 to 8 weeks. these are really cool gadgets. I just have the old time kind that hangs on the wall in the kitchen and one in the back yard. I use my tablet and it always matches the outside temps.... I have the radar on it and the outside temps. love my gadgets

We have another heat advisory/alert going on for today, cooling down a bit to the mid 80's but still with very high humidity starting Friday...Summer will just not die. (oooh - work stories? Let's hear 'em) Plus 3 cheers for today being the last day of the work marathon.

I have about 20 ways to find the weather and none of them match. I'm just gonna open the windows and see how cool/hot it is.

Yea to the last work day of Ann's Very Long Week at Work!

I need a recharge, LOL had candy at breakfast

It has been a long hot summer!

We have the atomic thermometer too. When the batteries are zapped outdoors, the outdoor temp on the reader in the house is blank. I too check it every morning.