While I was out and about on Monday I happened to see a woman with a child on a leash. I never used one and have always hated seeing them being used on a child. So then I come home and I see this on Facebook. 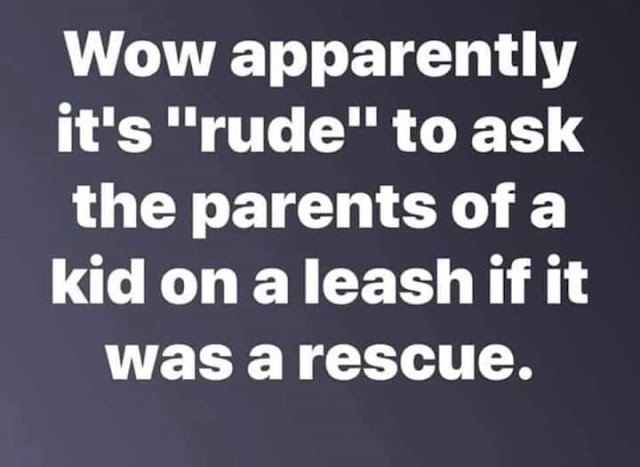 I found it funny and shared it. Apparently it struck a nerve with someone though because this is what she had to say
You find that funny? At fairs, carnivals, I used a leash on my kids when they were little..It's a safety issue in crowds and NOT to be made fun of. One woman confronted me once. I asked her how old her kids were; one was 6, the other 8. Then I asked her where they were.. Oh, somewhere around here, why? I responded that mine were "right here.....safe."

My reply was that yes I did find it funny and that I have never liked leashes on children and found them to be a poor substitute for a watchful eye. OOPS!! I guess that was the wrong thing to say also. Her next response was

when I used them - was 50 years ago. I was watchful and I resent the implication that the leash means a parent is not. I used them at places where there were large crowds. We are each entitled to our opinion I suppose.

I replied that there was no offense intended and it's just a difference of opinion. What I wanted to say was that the parents I've seen using them are not paying any attention to the child. Even in a large crowd someone could unhook them and snag the child while the parent is paying attention to something else. In my opinion a leash is not the best way to keep your child safe. Hold their hand, carry them, put them in a stroller.

So tell me what is your opinion about using a leash on a child?
Posted by Ann at 12:30 AM

Do you want a serious response to this? Or something as flippant and thoughtless as the original comment (or whatever posts in that format are called.)

Oh, I love the banter on FB. NOT. Although sometimes, I can't help myself. I was referred to as "Satan" the other day because I said Bombas wasn't giving away socks--customers were paying for those donated ones. Yeah...Satan. For that??!

Anywho...I don't really care about the leash thing. I guess it's better than the parents who let their kids just run around nuts while they ignore them. So..if you are an attentive parent, you wouldn't need a leash. But, if you are distracted easily, are a little paranoid or extra worried, I guess that is an option.

I never used a tether on my children but I did 10 years ago when I would take my little granddaughter for a walk at the mall. It was an indoor mall & usually always nearly empty (it's closed now) but it was a great place for her to expend some energy and use those new-found walking skills. I'm 5'9" tall so to hold her hand would break my back. The tether would allow her the luscious freedom of walking/running by herself but with me still having a hold of her. I figured if someone came up & wanted to snatch her from me, I'd still have a little bit of time to rescue her before the person cut the tether. Me using the tether had nothing to do with me not being "attentive" of her. Quite the opposite. Love, Andrea xoxo

Well, I actually don't have an opinion on it. Whatever works for the parent is O.K. But good grief! Even if you use a leash, it is just a joke! And quite funny as well. When I saw it on Facebook, I laughed and laughed.

That is one of the many reasons I do NOT like Facebook. There are too many who think their words, actions, thoughts are the law of the land. But, I think the leash is a choice for the parents. Yet, I would certainly take your comment you found as humor...and humor/for rescues only.

I think people need to mind their own business and keep their opinions to themselves. If the kids are safe then what business is it of yours how I supervise my kids. Everyone thinks they are right and everyone else is wrong. Bores is what I call these people. Thanks for letting me sound off.

Have a fabulous day and weekend. Big hug to you and lots of scritches to Gibbs. ♥

The joke was funny!

We thought that was really funny but people have to find something wrong with everything. My opinion, is each to their own. Ann, have a marvelous day.

I side totally with you. :)

Any kind of response you want to give works for me :)

Some people get too worked up over the stupidest things. I suppose that is one way of looking at the leash thing.

You make a good point. I can see where being that much taller than a child would make it difficult to hold their hand.

Exactly, it was just a joke. People need to lighten up and learn to laugh

Yep, it is a choice. And what I posted was just a joke. I suppose it is also a choice wether to laugh at that or get mad...lol

You are more than welcome to sound off here any time.

I think the joke was funny, and I've never used a tether myself, but they struck me as a sensible thing in the right conditions. I agree with Andrea that it can give the child a bit more freedom.

I've only ever seen a leash on a child once. Personally, I wouldn't use it.

I have never used a leash, and can actually see benefits, but like you would not want to depend on it. I have only seen them in use a time or two.

I think that is a funny quote, no matter what we think of children on leashes. I never used a leash for my children, but don't mind people joking about my sometimes funny habits. Taking offense is not worth it.