This archive dive is becoming a regular habit here but it's been fun for me to go back and see some of the stuff I did when I was first learning. I've also discovered that some of it, in my opinion, wasn't half bad.
The picture of the seagull was taken at a place not too far from where I live. It's roughly a half hour drive and we usually stop there at least once a year. 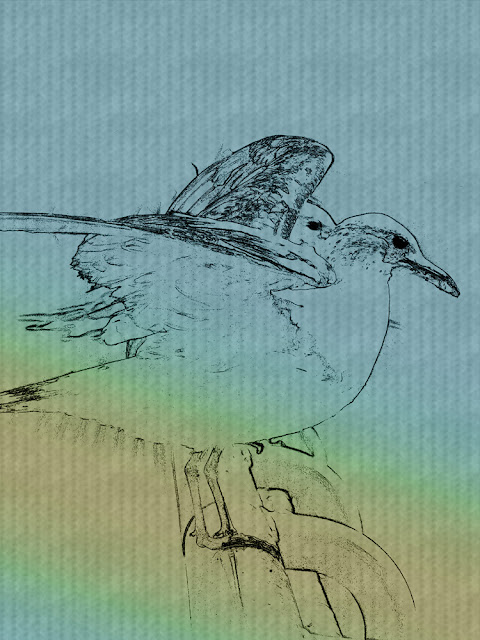 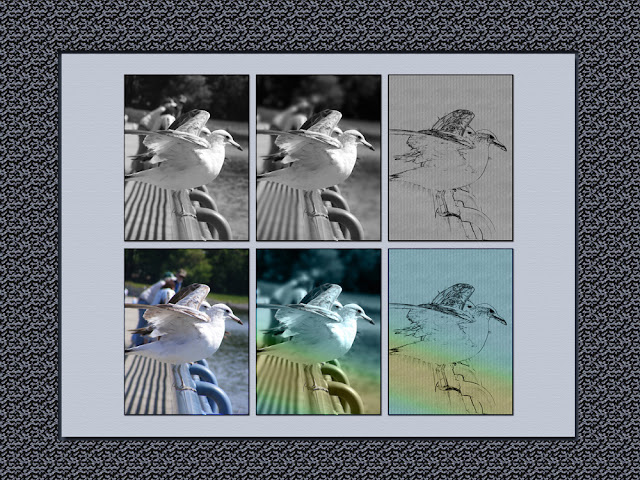 So the name of the place that this picture was taken is the Pymatuning Spillway in Linesville, Pa. It's billed as being the spot where the ducks walk on the fish.
I found a video on you tube that someone took of the fish. I think you'll understand when you see it why the ducks are able to do that.

Dear Ann,
My goodness! That was a lot of fish crowded in that water!
Thanks for following me on my new blog address! I don't want to loose my best commenter!
Hugs,
Anna
oxox

Dear Ann,
Thank you for changing the link to Anna's Adornments on your sidebar. Now it takes you to the right blog URL-address!
Best wishes & hugs,
Anna
oxox

Now that is really overpopulation!! Is it like this all the time? The seagull picture is just wonderful!! And did you do these great drawings?

Wow! Talk about bring back memories! My Dad used to take us to Pymatuning when we were really little...in the really early 70's! Great pics!!! Love your Archive Dive!!

Nope, I have never thought of fish as being amongst the downtrodden. Perhaps it is time.

Contrary to a lot of people, I love seagulls they are magnificent birds and I fell a bit sorry for them. Our waters have been overfished and they are inland more than at sea looking for food.

We have 2 that have been visiting us for several years, I know its the same pair as the female has a bad let and the male is a really big bird, they won't let any other seagull near to where we feed them.

We call them Floppy and Sid (such original names) and I swear they know us, when we come back from being out they greet us with loads of cackling, its as thought they are saying, 'here they come'
Or am I just a mad old woman. lol

That's a lot of fish. Do you suppose they are comfortable there? I can't stand crowds and I wouldn't think fish would like them either.

Hey Ann...I love the second picture you've put up...did you draw this or create it on the computer???

that is a lot of fish in one spot. kind of spooky even. you are right, this is a really great gull pic, not just a gull sitting, it's beautiful with the wing up. i like your archives, keep them coming. if we have beautiful pics and no one sees them that is a shame.

Amazing video, some major carp there.I liked this all well

Amazing! Love that first picture too!

Amazing video! And I so love the pencil drawing of the sea gull! Awesome!

Yikes on that video. That's a mess of fish indeed.

Love your bird shot. It's tough to photograph birds.

Love the gull photos and the editing you did on it!

As for that video....weird. I looked up the location on the web and found lots more weird pictures...Carp are crazy hungry fish!!

The first photo is great but how did you ever do the second one? Was that printed out? Really nice effect...Likey, Likey!

I always like to see what you have experimented with--keep 'em coming!

the Fish--BLECH! I can't watch that 'cuz it's gross! That is why I don't keep koi--they are just gross when they get big like that. Here is my theory: Any fish that would willingly eat spit is just gross.

You did a wonderful job on the photo!
And that's a LOT of fish!
hughugs

Big birdies and all those fishies - this is the purrfect post!

You are so good at making other effects with your pix!

That is one heck of a lot of fish. No wonder the ducks can walk on them. Wonder if they all survive. Thanks for the ahead of time prayers for you Mom. Take care and have a great evening.

Your seagull pictures are pretty. And man this would be a great place for fishing - right? sandie

The seagull pictures are really pretty! I've never seen fish crowded in like that and don't they have any food? Seems like they're starving. I wonder what would happen if someone fell in? Scary! But fascinating.

It's fun to go archive diving! Love the pics!

Those pictures are wonderful. Did you get that pencil effect from Photoshop?

There are places in Michigan where there are that many fish. They come over to beg for food when they see people.