I'll finish my little family archive dive with Wade. First let me say that getting a picture of Wade isn't easy since he hates the camera. Most of the shots I have of him he is visibly displaying his middle finger.
This one was actually something that he requested. It's made up of several pictures. The background is a picture that I took at the beach. I also used a picture of one of his die cast cars, a picture of him and a picture of a water skier that I found on the internet. The car, Wade and water skier were extracted from their original pictures and placed on the background. 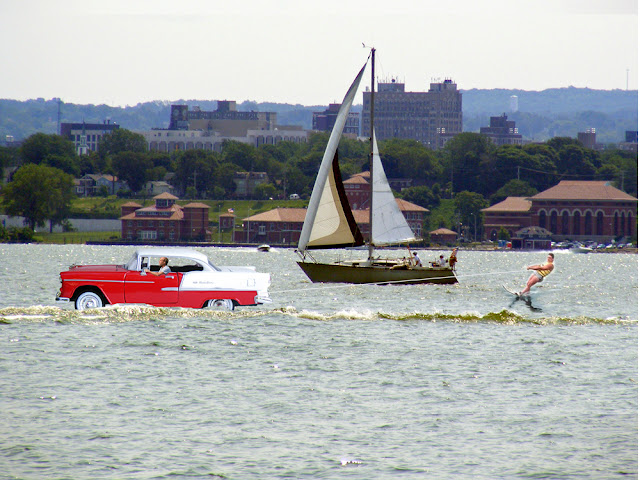 I wonder what the people in that boat think of the guy driving the car?
Posted by Ann at 12:01 AM

They are wondering how that car was staying afloat that's what they were thinking. A way cool shot though. I like it.

Have a terrific day. My best to the little man Duke. :)

Well, I have heard a few Ford fanatics referring to a '55 Chevy as being a boat, but I just thought they were being hateful.

BWAhahahahahaha!! What a hoot! Oh my.
Thank you so VERY much for the good morning giggle (I needed one today :o)

This is very good!

I was behind and got to read your Family Dive posts all in one swoop! Your last photo is too funny! Good job!

Hope you are having a happy week Ann!
xo Catherine

My first thought was "hey everybody, looks at the guy driving his car on the water! How did he do that?"
Way too cool!

Oh that is way cool!

my first car was just like that but turn the red to aqua, 56 chevy. cool shot and great idea... bet the sailboat thought Say WHAT?

I have NO idea how you do these things!Hahaaa
Love it!
hughugs

That is so cool!!

This photo is wonderful! I love it! You are one creative woman! I love all of your family photos! Wishing you a happy day!

Hugs to you and the Duke guy,

HaHaHa! Pictures of my son look a lot like Wade's pictures. Dang, that finger!

All the elements in this photo are so cool!! It must have taken a lot of work.

What a fun idea for a photo!

This is a fantastic picture Ann..not only is it fun it's so well put together that I can't see the seems...I actually thought you had put the boat into the picture too...I had to read again what you had written to make sure it was there originally!!

Definitely one to be proud of!

What a fun picture this is. Love it!

That is most amazing...what a lot of work you've put into this image, and so well done!!!! Truly, that's a die-cast car? Unbelievable. I like your style!!!

Thanks for visiting with me this afternoon.

What fun! And you did a great job with it!

What a fantastic job! You rock! Surely this is a photo Wade doesn't mind being in. LOL.

I'm trying to figure out what would cause him to request that photo. It is pretty cool though!

Well done girl - that was awesome - I never even thought something like that was possible. sandie

Guess seeing a skier being pulled by a car would make everyone do a double-take..... ha ha

You did a great job putting that picture together... Love it!!!!!!

This is really cool Ann! You are sooo creative!!!

This is so neat! And freaky!

This is great and I love it! You are one talented gal!