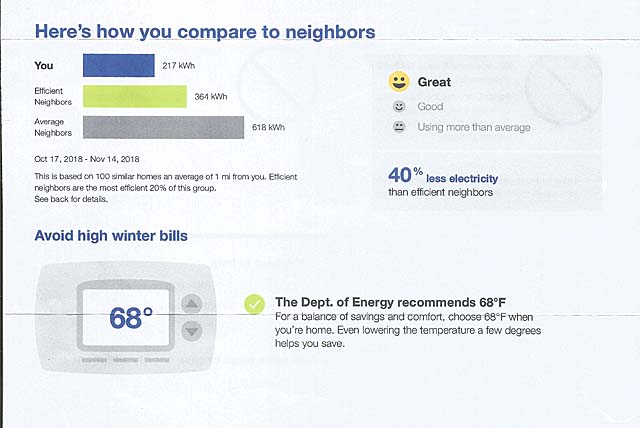 The thing is Wade always left the tv on. If he was home the tv was on and that includes all night long. In the winter he also ran an electric heater and sometimes even the electric fireplace in the man cave. November 2017 is when his job was eliminated and he was home all day every day which meant the tv was on 24/7.  He also insisted on keeping the thermostat at 72 degrees. This letter suggests 68 which is where I've had it set. It's a big chilly at times but then I just grab a blanket or put on a sweater and I'm fine. 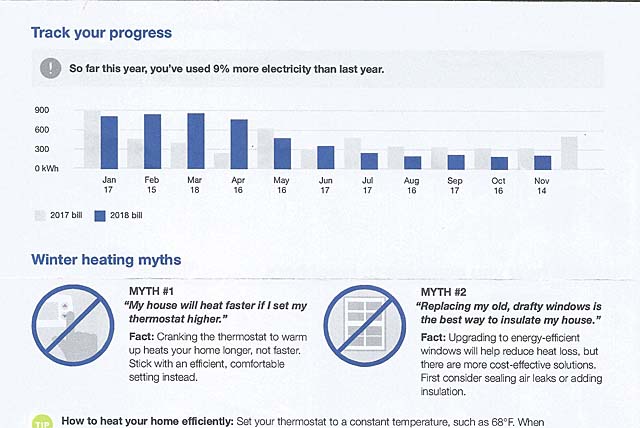 Hard to think that something good is happening as a result of this. And of course I know you would much rather have it the other way.

I read the first paragraph of this blog entry, Ann, and knew exactly what the rest was going to say.... Wade & his tv watching, etc. My goodness, he was a "good customer" of the electric company, wasn't he?! Bless his heart! Well, now he's in a place where the electricity is free and he can watch tv all day if he wishes, without paying a dime for it. One of the perks of moving along to the next place. Love, Andrea xoxo PS~ I turn my heat down to 66 at night and then turn it up to 69 during the day, when I'm up. We have "something" on all day too: tv or computer or whatever. Plus we have a couple porch lights burning all night, for security, and that gets counted into the mix. *bleh* Two furnaces don't help the cause much either. :-/ Oh well.... all we can do is try our best, eh?

That's great, do you get a medal, lol
I must admit I don't turn things off and I like a lot of lights on but we save the same amount all the year round and so we always have enough for the winter.
Treat yourself with the extra money you've saved.
Briony
x

If I had my way, the tv would not be on (maybe for movies only as I hate commercials for the most part. Yet, some commercials are better than programs). I just can't justify cable bills when it's 90% commercials. As for electric use...just gimme the a/c in the summer.

i agree with Ginny's comment. glad your power bill will be down and save you dollars, but I know you rather have him using power than living alone. I for one know the TV talking that drives me nuts if silenced would be worse than hearing it.. our power doesn't do this for us. it is a good idea. I guess we don't need it here because of year round good weather... they do warn us about to low temps on ac

That's good information to get so that you can make adjustments. You're doing great my friend!

Puts to lie that 2 can live as cheaply as one - but what price the company of the other one?

A couple degrees can make a big difference. Electric heaters use the power. I'm glad you're using less.

Have a fabulous day. Big hug to you and lots of scritches to Gibbs. ♥♥♥

WOW. That is a really noticeable change...and a nice surprise! I go around shutting all the lights off all the time and keep the thermostat at 67 or 68 during the day, it goes down to 63 at night because we like it cold with lots of blankets. You will slowly learn what is comfortable for you and adjust it accordingly. But in the meantime, how nice that your bills will be doing DOWN!

That's a great reduction. I know we are always higher than our neighbors!

That's quite a difference! Good for you to knock those bills down by being more efficient! J always has the TV on but only about 4 hours a night during the week but then most of the day on the weekends especially during football season. I didn't realize it was such an electricity suck.

What's the saying? When one door closes another door opens.

Yes, he was but when he would complain about the high bill and I would mention his tv and the heater he would deny they were the problem. Something tells me he has given up tv watching and is spending his time doing things he loved when he was younger.

Even though I'm using less I don't see a change because he was the one who always paid the bills. Now I'm stuck with them all and they're all more than I want to pay out...lol

I discovered that mostly I had tv on for the noise. I don't watch nearly as much as I used to but then again I'm very limited to what I can watch now. I'm only getting whatever is free through the fire stick and what I can get with a digital antenna. I'll never get cable again though even if I can afford it. All those channels and still nothing worth watching. There are more affordable options

I am perfectly comfortable at 68 and when i feel a bit chilly a sweater or a blanket is more than enough. When he had it set at 72 all the time I spent most of my time upstairs and would roast.

I'm good with the thermostat set at 68. He always had it at 72 and in the upstairs I found it way too hot. If only I could show him that letter and say "I told you so"....lol

Wade used to complain all the time about how hight the electric bill was and when I would say it was his tv and the heater he would deny it. I'm not sure what all has made the difference. I suppose I'm using less than what I was before too. It all adds up

hard to get bread to always rise at 68. I like the lesser bill however.Would love to have you along on a photo shoot, lets do it soon!