The making of a mountain

I already told you we got a ton of snow Saturday night and Sunday. Well my deck had about 1 1/2 to 2 feet of snow on it. I heard that it's supposed to warm up a little, rain and then snow some more. All I could think of was that all that snow on my deck is already heavy enough but if you add some rain to it the weight is just going to put a lot of strain on the deck. With all that in mind I thought it would be a good idea to go out there after work and start shoveling it off.

I took the supervisor out with me Since the railing was never fixed last year after the pool came down there is still a space on the front of the deck where I could just push the snow off instead of having to lift shovel fulls over the railing. You can see that my little mountain goes right up to the deck. 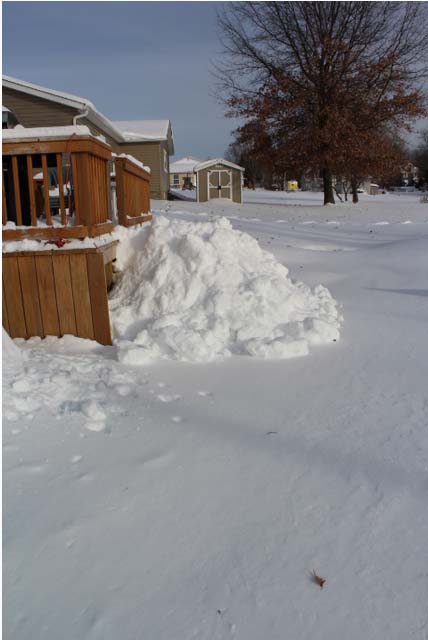 Here's another view. That is a lot of snow. I probably should have pulled some of that snow down from the roof too. 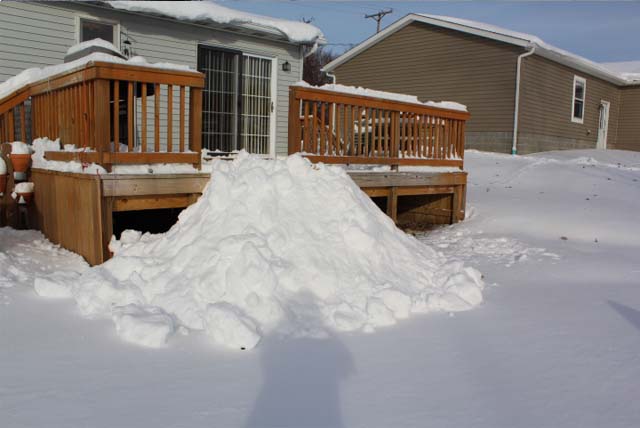 Yikes, you did a good job!! I bet the Supervisor had a ball!

That was a good idea! Fingers crossed you don't get much more snow. Take care.

Be careful dear Ann. That sure is a lot of snow, hope you won't get too much more.

You did get a lot of snow!! Take care with the shoveling.

yikes, yowsa and OH MY WORD! that is way to much snow. I could not handle that.. don't do the roof, you might fall off a ladder... and if it rains the deck will be ice, be careful... my what iffer has kicked in high gear thinking of all the dangerous things that could happen in that snow... how do you keep the snoopervisor from leaping out the place where the mountain is. I see a gate at the other place...

You do have space between the deck and the bottom of the railing to push-broom the snow through, tho I suspect that is easier done while the snow is still light and fluffy - a house is a lot of work, maintenance-wise, in the Winter even more so...

It doesn't look like enough snow to do damage...but I'm sure it was good to get it cleared off the deck. The roof should be fine. Don't hurt yourself in the process.

Oh my. I don't care for the snow at all. It just makes things so difficult. Don't hurt yourself.

Gibbs is adorable though.

It sure did wear me out.

Yes, it sure is a lot of snow. And it came all at once. Today was rain all day

Yes, we did. More than I care to have

He was mad because he couldn't get up on the deck while I was shoveling. Barked at me the whole time

Yes, there is a small space there and I did push some snow off through that but most went over the edge in that one spot.
Yes a house is a lot of work. Too much sometimes.

Yeah, it probably would have been but I felt better about getting it off. I wasn't really worried about the roof but thought of knocking off the stuff that is hanging over the edge. Wouldn't want to go out there and have it fall on my head.

Beleive me, I was careful. I pushed the snow more than lifting the shovel. My arms are a bit on the sore side though. Used some muscles that have been taking it easy for too long...lol

a job well done, helped along by your supervisor...thanks for sharing your pictures

We bet your snoopervisor was pleased with all that work! That's a lot of snow! We haven't had one snowflake. Just sayin. :)

Thanks. Don't know how I would have got the job done without the supervisor...lol

I didn't let him go up there but I wonder if he would have tried to walk out there on that pile of snow if I had.