I'm feeling very uninspired to write a post today so I figured I would talk about my new ears. Actually they're the same old ears I've always had so it's more about their new friends. 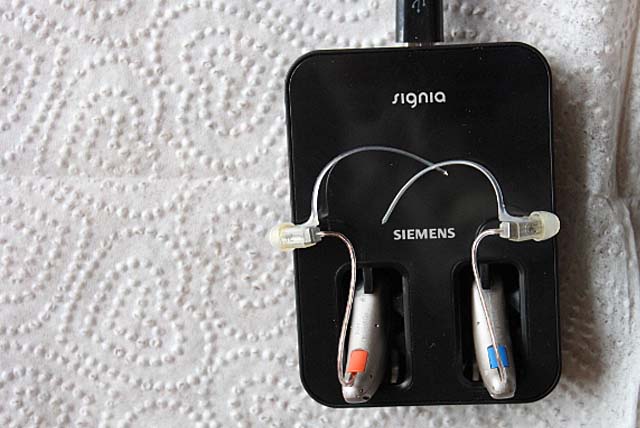 So it's been a week now and I have to say that I am amazed at all the things I have not been hearing. Although it's wonderful to be hearing better it is also a bit overwhelming at times. When I first put them in in the morning everything sounds really loud. Also when I get to work and all the equipment running in the bakery it just gets very loud . Last Saturday I was in the basement and almost had a heart attack. As I was standing there suddenly there was a loud alarm type noise. It took me a minute or two to figure out that it was the dryers signal going off. I had never heard it before.

The hearing aids also came with a microphone. I used this last Saturday to talk to my daughter on the phone and it worked really well. I've also used it to watch tv. I turn it on and set it next to the tv and the sound comes right through my hearing aids. 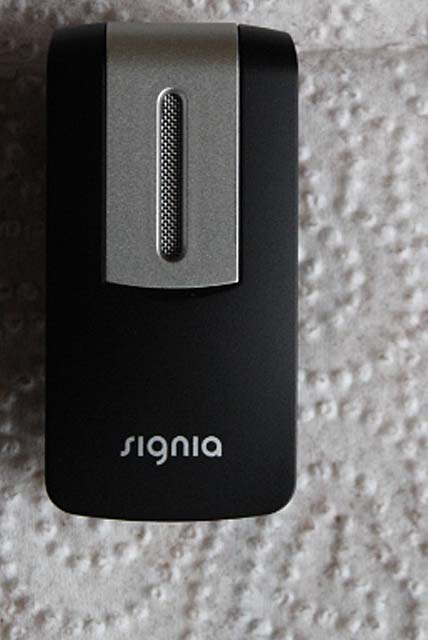 Probably the best part is that I'm hearing people talk much better than I was. Yesterday at work the boss called my name and I turned around and said "yeah" his response was WOW, you heard me, I usually have to yell at you a few times.
Posted by Ann at 12:30 AM

Wow, this is really like a miracle. And the little speaker is so cool! I am so happy for you! I hope insurance paid for all of it.

How wonderful that your hearing aids are working so well for you. I can imagine though how overwhelming the sounds must be. I'd like to muffle the road noise out front, the a.c., etc. :-)

It's wonderful that your new ears are working so well - are you feeling a bit like a kid with a new toy? :D

bob's hearing aids saved his life because I was ready to commit mayhem on him because he could not hear me... I am so happy you got them and I did not know about the speaker. bob needs one. if I ever get him back for his 5 year test I will ask about them. he says the same thing about noises overwhelming. when I am in the kitchen cleaning, opening and shutting drawers and cabinets he says what are you doing because it is so loud. the dryer thing I can hear over the TV even with it being in the garage. he came home last week and I have the tv off when he is gone and the dryer went off and he jumped and said what is that? he had never heard it because the TV is always on. I am rattling on. be glad I am not talking because I am loud

I'm glad they are working for you. Some love them and some hate them. Hearing is such a wonderful sense.

Have a fabulous day, Ann. Big hug to yo and lots of scritches to Gibbs. ♥♥♥

My first thought was - "Whoa - the sound from the tv directly in your ears!" but then again that's what headphones do, don't they? I imagine, after all these years not hearing well, that you are overwhelmed with the sound experience. OTOH - isn't it grand!

That's GREAT news! Imagine the sounds that you didn't hear that are important--horns honking or sirens approaching when you drive...smoke detectors...I am sooo glad you got these!!

Oh my! This is fabulous! I'm so happy for you to hear things you've been missing!

Now maybe you should rethink this, always hearing the boss might not be a good thing! HAHA....So happy for you. I have a friend that has had nothing but issues with his but I think a lot of it is working with the loud equipment. But the first time he has his back to me and I spoke, he turned and did not say, "what"! It was nice to not have to repeat it and I am glad for anyone that can hear after so long. Congrats to you.

A friends dad turned his down when he didn't want to be bothered. A lot to enjoy I bet, find a good bird feeding station at a park and be amazed at the birds singing to you.

So happy you are hearing better. My husband has a hearing aid for one ear but really needs one for the other. Because of the expense he has been getting by with just one but I notice he isn't hearing all the time. He says he is hearing fine but that is because he doesn't hear what he is missing.

He is able to change settings for various situations and loves that he can lower the volume when all of the grandkids are being loud :)

They were paid for entirely through OVR (office of vocational rehabilitation) It was suggested to me by the audiologist at ear nose and throat when I said that I couldn't afford them. It didn't go through my health insurance at all

It is great but an adjustment. I guess it is sort of like a new toy

Yes, it is grand. Amazing. I knew I couldn't hear well but I guess I didn't realize how much I was missing.

Thanks. yes me too

It's been quite an experience

LOL you have a point about hearing the boss. There is a guy at work who recently got hearing aids as well and he has had so many problems with them and quite honestly he doesn't seem to hear any better than he did before.

There may be times when I turn mine down too...lol
I imagine I'll be hearing lots of birds soon.

Thank you so much for writing about this. I will probably need them even more in the fullness of time, but I don't like loud noises so I'm guessing I won't be as patient with them as you are. I do appreciate you sharing your experience. That to me is one of the best things about blogging.

You are very welcome. I've been tempted to take them out when I get home since it's just me and the dog but I figure the more I wear them the more I'll get used to them so I leave them in until I go to bed. I can turn them down too but then I think if I do that even though it will help with some of the noise I might not be able to hear people talking

That's awesome! My sister just got one and she said similar things. It's taken her a long time to get used to them.

how fabulous is the technology that gives you so much more.

They really are pretty amazing. I didn't think it would be this much of an adjustment but it's a good thing though

I know, they really are quite amazing. When I was picking them out she told me they even come in different colors so you can match them to your hair color. These do match perfectly too. You have to be realy looking to notice I have them

I'm so glad that they are working out!