There is a young guy at work who started off in the deli and has since been moved to the office and training to close the store. He's not a bad worker but is always in too much of a hurry to get the job done. I was constantly telling him that he needs to pay attention to detail. He works on morning shift on a delivery day and puts out stock on those days. The other day after he left I looked up the isle and saw this. 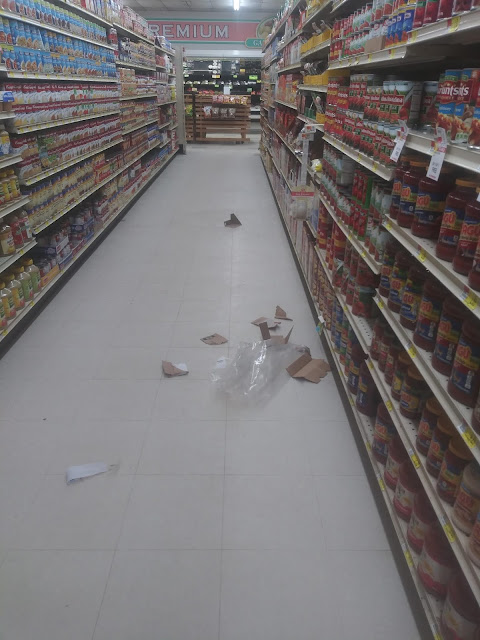 It looks like he still needs to pay attention to detail.

Then there is the recent hire in the deli. It's a young man who will only be with us until September at which time he'll be leaving to start school at Princeton. His name is Kyu (pronounced like the letter Q) He is very intelligent and the sweetest kid ever. Kelly, the deli manager told him yesterday that he got paid this week so make sure to pick up his check. He asked if he had to take it and he was serious. He wanted to give it back because he said he didn't feel like he really earned it. He also said that he feels bad about being there because he's taking a job away from someone who might really need it and he's not long term. We finally convinced him (I think) that he really does serve a purpose and he should stay on but he made us promise that when we find someone to replace him for when he goes to school that we will fire him. He is just too adorable for words.

I snuck a picture of him without him knowing. 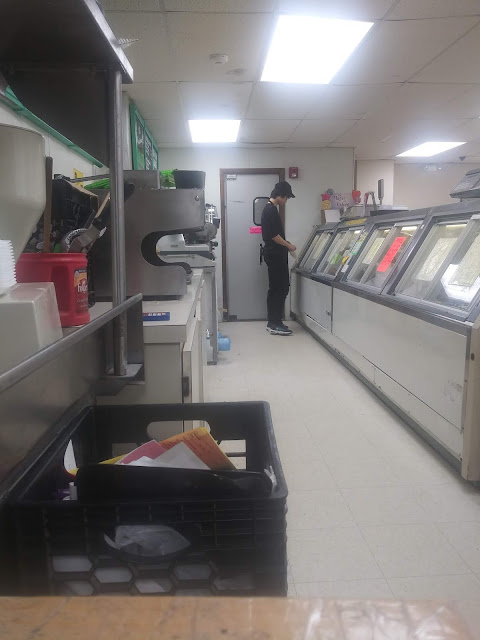 So interesting. I bet that bakery is like a soap opera, all kinds of things going on.

Such a difference in work ethic...🤦‍♀️
Hugs

the Yin and the Yang and that is in anything, even the employees. we sure need more like him and less like the other. and it is scary to think he will be closing.. the doors might be left open

It's refreshing to read about KYU - nowadays most seem to want to get paid for doing nothing. :)

At first, I thought your store is CLOSING? Then I realized, duh...closing at the end of the day only. I guess I need brain check. Speaking of checks, I'll take his...then you and I can go out for a shindig!

Those are some interesting people that work there.

Some take great pride in their work and others are there for the paycheck. The paycheck is a nice benefit, but the work ethic is the better part of the deal. Taking pride in a job well done can't be beat.

Have a fabulous day and day off, Ann. Big hug to you and tons of scritches to Gibbs. ♥♥♥

send that check to me LOL

Kyu is obviously a well brought up young man and a lovely human being!

Thank god for Kyu! There is hope for our world!!!

And that's what I told him when he said he felt like he was taking a job away from someone who needed it more than him.

I do that all the time. Don't feel bad :)
I told the deli manager I would gladly take his check too...lol

different upbringings I guess - factor in these 2 lads...

we have lots of interesting people...lol

Sadly there are very few any more who do take pride in their work. The majority are just there to collect the check

want me to give him your address

His father is a local methodist minister so I imagine that plays into it.

Yes, I imagine so.

OMG that is so funny! He doesn't want his check? That is sweet and strange! :)

What a spirit lifter! Doesn't the office care about the sloppiness of the other fellow?

Yes, that is definitely unacceptable! I love the new guy Kyu, what a sweetheart.

Isn't it though. I thought he was joking at first but he was dead serious.

Nope, so long as they don't have to take care of it, they don't care.