What a way to start the day

So my Wednesday morning got off to a good start. I went out to start my vehicle to go to work and it said no, I'm not going to work with you today. Great. I went in the house put my boots on and started walking. It was cold but the wind wasn't blowing so that didn't bother me too much. The sidewalks were a bit slippery though and I did fall once but thankfully not hard. As I was walking, I passed one of the churches and I can't recall what their sign out front said but I mumbled to myself that I was thankful that I lived close enough to work that I could walk.

Later in the morning I sent a text to my son asking if he could come over later and try and jump my vehicle. I was hoping it was just the battery. He asked if I had a ride home and I told him no I was planning on walking back home. He said they would come pick me up and then he would look at the car. In the meantime I also got a text from my daughter saying that I could have called her in the morning for a ride to work and that they would stop on their way home so her boyfriend could look at my car.

Not my picture I just pulled one off of snappygoat.com for the post 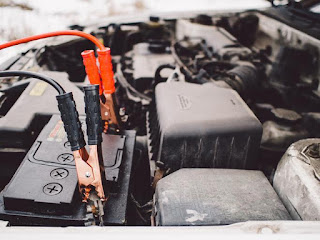 My son didn't even need to jump it. He was able to get it started and said it was just that the battery was pretty low and needed to charge. He asked if I've been driving it much which I haven't. I've only been going to work and back which is a half mile one way. Other than that I've been hibernating.
Posted by Ann at 12:30 AM

Glad you didn't hurt yourself when you fell, and that your car woes were an easy fix.

Have a good day and weekend ~ FlowerLady

Guessing batteries are like us people....we hibernate and have issues getting things started again also! :).... Need to maybe consider just taking that baby out and about around the block or more just to get out and get it moving more. I personally know that is hard on cold days since I don't wish to get out and about myself! Sorry about the fall and hoping that you were not hurt. Sore maybe later but sore will go away, hurt not always. Take care and be careful.

How nice that they both came to help you. Those are good kids.

How old is the battery? If it is 4 years or older, just get a new one. They don't last longer than that. Battery is an easy fix.

I'm glad it wasn't anything serious, but having to walk to work isn't fun. I'm glad you're close enough.

Glad it wasn't anything serious. But good for you to walk to work. You have a good day Ann, and we hope the car behaves itself now.

Sounds like you need new battery, Ann. You should be able to leave your car sit for weeks and have it still start when you need it to. Cars.... can't live with em, can't live without em. I wonder if horse & buggy is better? I'm guessing not. *lol* How nice that you live so close to work. If I lived in town, I swear I'd walk or take the bus wherever I needed to go. We looked at a house last year that was across the street from our local grocery store and the bus stop was half a block down. I wish the house would have worked out cos that would have been right up my alley. Love, Andrea xoxo

Wonderful to have family nearby who can help out and that you can walk to work - I think we've all had enough of winter already. ^^

We had that problem every winter with our car - it was driven maybe 4 miles a week and just sat in the parking lot for 6 days at a time - soon as it cold the battery would be kaput. AAA made several visits every winter and the dealer would replace the battery every year while the car was under warranty. When the warranty ran out we got a Sears battery, but we had problems with that. Mechanic said we had to run the car more but we didn't have any reason to - so after 6 years and maybe 30,000 miles we finally got rid of the car!

You do have wonderful and helpful kids!! How nice of them!! Good luck with the car in the future...ugh!! My vote is for hibernation also Ann!! Annster's Domain

Hate to talk to cars when they don't work

I'm so glad you weren't hurt, and that you have good kids who are happy to help. I've heard that just driving around town isn't enough to keep the battery charged so we take my car for longer drives once in a while just to charge it up. It's a lot worse in cold weather.

Glad it started up. I don't drive a lot of miles each year. My mini cooper, like many cars has computer things running all the time. Having replaced the very expensive $350 battery we were told to use a trickle charger and that has worked great for us. We keep it plugged in when I'm not using my car for a few days.

Thanks. Yes, I got lucky when I fell

LOL, yeah, I definitely have issues getting started again.

It's about 4 years old

When I got there the boss said he thought I slept in or something and then he said I should have called him, he would have come and picked me up

It started fine this morning.

I'll stick with the car because I don't have to feed it daily or shovel up the mess left behind...lol

yes, it sure is. I'm definitely ready for winter to end

My son thought because I haven't driven other than short trips to work and didn't go anywhere over the weekend when it was super cold and windy that that was the reason. He told me I need to take a drive more often

Yes, they are helpful.
It started no problem this morning thankfully

Yeah, cars are so full of computer stuff now that Wade always wanted to trade in after 3 years before things started going. Me, I want to go without a car payment.

love that reply that we are "just a battery ourselves" yesterday as I ambled down to my hub to meet a friend, I thought "hopefully when I get back from my adventure, I'll be less creaky than I am now" - I too have been kind of hibernating even though it's got nothing to do with winter...

I'm glad your car is alright and does not need a big repair! OH, that would have been so scary, falling! I hope you are O.K. You DO have kids that love and attend to their Mom!

Well...Leave it to you to walk in ice and snow!!🤦‍♀️🤦‍♀️🤦‍♀️
Girlchild!! You be careful out there...and in that cold weather, you have to run the car every three or four days just to keep the battery up. Maybe more.
Consider this your official scolding...♥️
Hugs

I was relieved that it was an easy fix. So far the battery has been ok since then. I was a bit worried after the first fall that it was going to be a treacherous walk but it ended up not being so bad. Thankfully I didn't fall hard

I've been pretty creaky myself lately. I'm hoping once warmer weather hits I can get myself to be a bit more active and hopefully get back into shape.