Yesterday was one of those days that never seem to end. Lots to do at work. One thing on the list was a cake order. The girl I was working with had said that the woman who ordered it said that someone had recommended me and told her to make sure to ask that I do the cake. That was a nice feather in my cap.
They wanted the colors to be navy, pink and ivory. 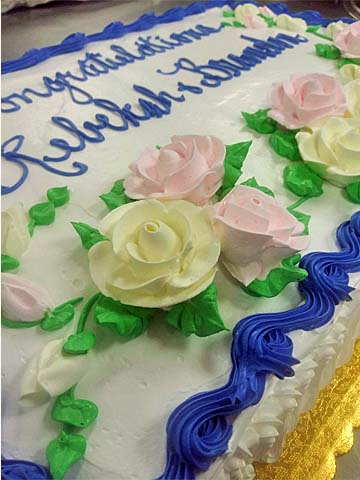 The deli girl said that the person who picked it up wasn't the same person that ordered it. I couldn't tell whether she liked it or not. Some people will come right out and say what they think of it but this one just sort of looked at it when I brought it out and didn't react at all. 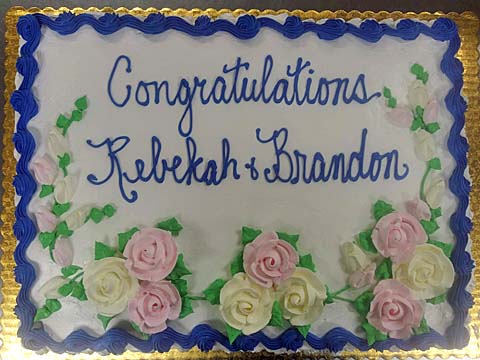 Actually, now that I'm looking at the picture, I don't really like the placement of the roses. Oh well, too late now.

Any way, when I left work it was 54 degrees out. Not only that but the sun was shining. I know to some of you 54 sounds cold but after what we've had it felt heavenly. Today is supposed to hit the low 50's again.
Posted by Ann at 12:30 AM

It is beautiful; you are a cake artist. I especially love the color of the creamy dreamy roses. The pink and yellow are so soft looking.

I love it too, I can see why they specifically asked for you. And I'm glad the weather has warmed up for you and that the sun came out.

Yay on the weather (and lucky you for having sun shining!)

Oooh I love the way you arranged the roses...you sure are talented Ann but some people dont know how to react. I know several people who will hardly acknowledge or say an appreciative word even if they like something...it is the way they are made so dont feel your work is not good or that she didnt like it!!
Cheers
Dr Sonia

the cake looks great to me.. I wish I could write like you do. if I wrote it, they would think a doctor wrote it... you are getting a good reputation for your cakes. great news… I remember those days that I thought would never end.. yay for job security and feeling good...

That cake is gorgeous, no two ways about it. Ann, hope you have a good week.

I think the cake is perfect. You did what you were asked and it's a shame that some appreciation wasn't forthcoming. Oh well.

Yes, that's a lot warmer than you've had of late. Enjoy.

Have a fabulous day and week, Ann. Big hug to you and tons of scritches to Gibbs. ♥♥♥

I think the cake looks beautiful! I'm sure they liked it.

It's amazing! Especially the rose buds...Much to pretty to eat! Oh how I envy people with artistic talent.

ditto to all the comments above, I hope the recipients of the cake, drop by to thank you...

Beautiful cake decorating. I think the roses are perfect! :)

I love it! Very pretty! I have no patience for cake decorating.