I've shown a couple of things that I've made to give my bathroom a bit of a new look. Today I have a little more.
The wall next to my sink has had the ugliest picture hanging there forever. Probably 20 years or more, this dollar store picture has been there. I keep saying how ugly it is and yet I have left it. I don't even know why I bought it. Before you ask, yes that is a snowman nightlight. It stays there all year long because we got quite used to it being on in there and I don't have one that is less seasonal. 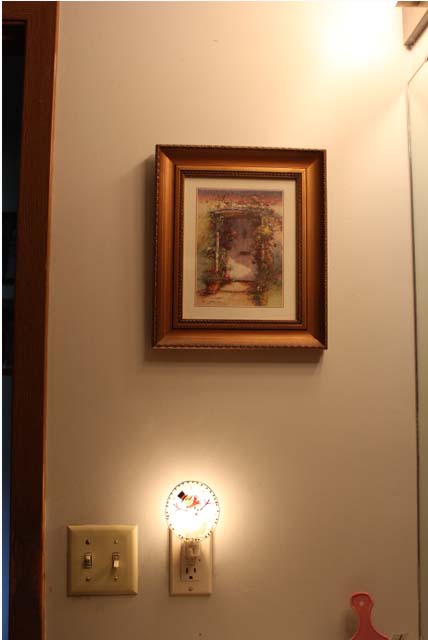 Moving on I made some more reverse canvas signs. Yes they are plain but plain works for me. I attached these to a burlap ribbon but I think I may take that off and just hang them individually because I'm not crazy about the way it lays against the wall. I'm also not sure if I will leave it centered like this or maybe move it over and put something next to it. I was thinking that burlap cone would go here but next you'll see where I put that. 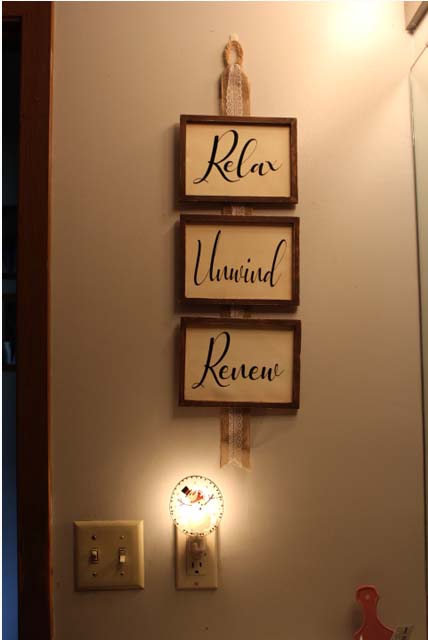 The biggest wall in the bathroom has had this shelf which has been empty since Christmas until I made the bath sign. Before Christmas I've changed things on it from time to time. The quilted wall hanging has been there forever. Maybe as long as the ugly picture. 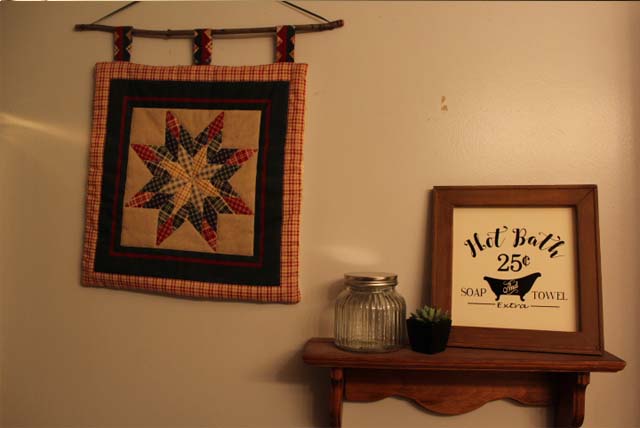 I took down the quilt thing and put up the cone. 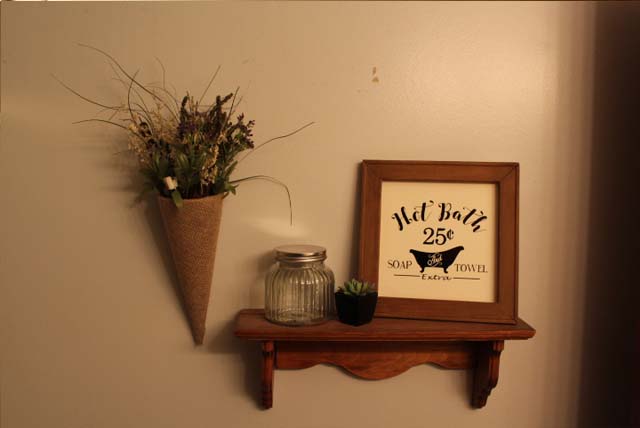 Not the flowers I want in there but it was all I had right now. That spot on the wall above the shelf is from one of those command strips that aren't supposed to harm the wall when you pull them down. This one harmed the wall. I need to paint in there anyway

So I should state here also that I totally suck at decorating. It's really just not my thing. Other people can put things together that look wonderful, me not so much. Maybe it's because I try and decorate with cheap stuff and things I make. But it is what it is and I can live with it so that's good enough. If you have any suggestions for a different arrangement of the things in these pictures feel free to share them.
Posted by Ann at 12:30 AM

The important thing is do you like it? I think it's neat that you make a lot of your decorations, and that you change some of them depending on the season -- if you feel like it. We have only a couple of posters, two pictures, and a wall calendar on all of our walls. Except for the calendar they've been there for years.

Sorry to say this...but, I LIKE IT ANN! Your new things...fitting for bathroom decor, and personal 'cause you made them!!

I like your changes. Changes give us a different view on life, and if they make us feel happy and content then that's a good thing. There is nothing wrong with making do with what we have, or in making things by hand.

Happy decorating from your heart ~ FlowerLady

I beg to differ; you ARE good at decorating! I love the changes, each one looks better than what was there before. The Relax Unwind sign is so much more modern than that picture. To me, the picture is not ugly, but the frame is! The Hot Bath sign and the flower cone are so much more pretty than the quilt hanging! I love decorating and am always changing things, but I am terrible at it.

I like all of them and I think you do a great job decorating. I'm just saying.

Have a fabulous day. Tomorrow is your day off. Big hug to you and lots of scritches to Gibbs. ♥♥♥

Oh, Ann, I think you decorate fine...if you could see my house you would then realize you are a genius compared to me. It just is not my thing. I love going into a house that is well put together, but I guess like you I have always tried to make do...and part of it is I like what I like and if it is a jumbled mess, and I like it, that is fine. But as the what you call the ugly picture, I quite like it. To each his own, I guess. It would be a boring old world if we were all alike.

Yep...I like the changes too. Things don't have to be expensive or new..just move them around every now and then to freshen up the look.

I would move the wall vase a little down and to the left. Center the photo and put the jar and plant on either side. Try that and see if you like it. Or not. :)

I'm letting it hang for a few days to see if it works for me or not...lol

Well thanks. I guess it's just a matter of it being so different from what was there. I need to get used to it.

Thanks. I suppose at one time I must have liked that picture but now not so much and yes, the frame definitely is ugly...lol

Thanks. I guess since I only have myself to please now if I can live with it then it's all good

Funny you should say that about the vase. It actually fell down. The command strip I used to hang it was an old one and I guess the sticky wasn't so sticky any more...lol

I like the updated looks! Sometimes just changing things out makes everything look better! Great job!

It looks good to me, Ann! I think whatever a person does that they like is the best decorating that can be done. AND I think your little snowman would make me smile all year long.

You did a nice job on your signs!!! Have a wonderful night- xo Diana

Revamp the frame, then create a picture to go in side...maybe find another place in your home that could do with a little touch of fun

grouping things together, you love, is always good, even if you feel they don't match or similar. So that revamped frame (I mentioned above) could just lean against the wall - rearrange as need be - add/subtract

Thanks and yes, a new look can go a long way

I read a long time ago to always group things in 3 so ever since then that's what I try to do.

It all looks great! You did good - I suck at decorating too! I know what I like just don't know how to put it all together.

You did a great job! I like it. We have nightlights throughout the house.

That's exactly me. I can picture it perfectly in my head but when I put it together the look changes completely.