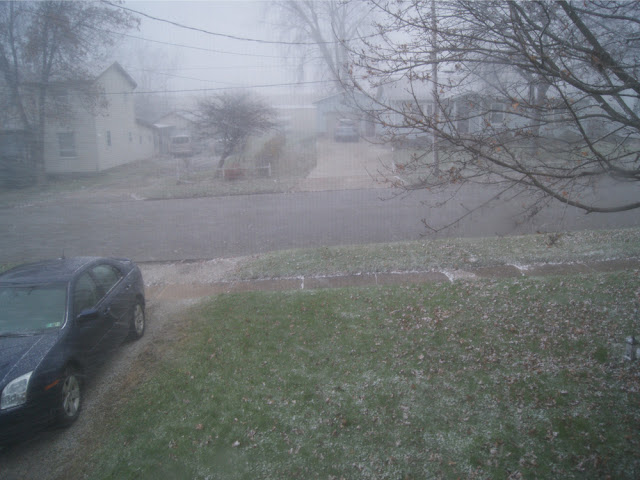 I took the above picture through the window at around 4:30 p.m. Thursday. About a half hour later the grass was almost completely covered.
Pause here to shiver

I recently won a giveaway. I was thrilled when Ginny from Let your light shine announced that I had won the Scotty dog purse she was giving away. 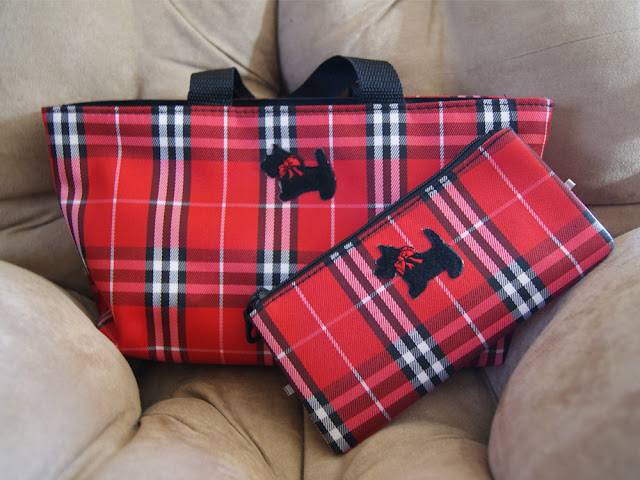 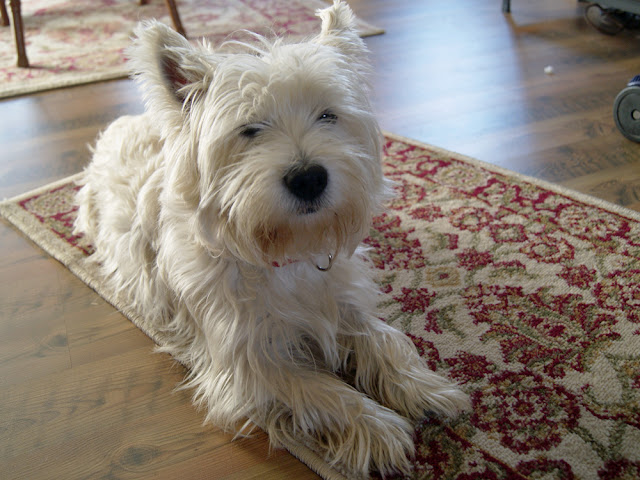 According to Duke, that is not a Scotty dog. It is a West Highland White Terrier silhouette. So thank you again Ginny for the Westie silhouette purse :)

Finally I wanted to tell you that I haven't forgotten about the book giveaway. I'll be doing that either tomorrow or the day after.
I'm very far behind on email, blog reading and everything else. It's amazing how much can pile up around you when you take a couple days off from everything.
Posted by Ann at 12:00 AM

Oh no not snow! Congratulations on winning the Westie silhouette purse! That's a very nice prize! Duke, we love seeing your cute face!

Gads, your snow picture! It looks like the tree across the street is blowing over!!! It looks like you are having a snow tornado or something! Are you sure you're not in Kansas and Duke isn't Toto? Thanks for the mention, I just KNEW Duke would have something to say about the purse!

When there's snow... its all the better excuse to snuggle up in the mancave with Duke and just relax and let your back heal nicely. Hope you are feeling better already. Take good care ya!

Hi Ann! I hope you're feeling better today. Wow, that purse set is gorgeous! What a nice prize! True about the Westie silhouette too ;-)
Duke is so clever!

That is how it started with us. A little snow on the ground the first time and then along came a foot of snow the next.At least with us it warmed up afterwards.Hopefully it will do the same for you.

Congrats on winning the gorgeous purse!
I don't even want to think about snow - hope its melted!

so why not dye Duke black and take a photo and we can compare to the purse. what think ye Duke about that caper. brrr and shiver on the snow shot. how is your hand? better i hope. rub some snow on it. LOL or stick it in the pool

What a COOL Win! Good for You! So glad the Duke corrected the error!Lol
hughugs

That looks like perfect weather to put on a pot of beans, boil chicken and start rolling out homemade noodles. I used to prefer chewy noodles, but now that I only have four teeth left, the light/airy ones will do quite nicely. Oh, a meatloaf and some bacon for Duke would also be nice. Yeah, a woman's work is never done, but as long Duke and I benefit, it is worth the effort.

I would hate to live in snow country. I'd rather be on a tropical beach in 80 degree weather all the time. I'm a fair weather girl.

Love the win. Cute as all get out.

Thanks for clearing this up Duke. You are so smart.

Have a terrific day and weekend ahead. My best to Duke. :)

Congrats on your lovely bag! Big hug to Duke! You don't want the snow and I'm tired of the heat. LOL
I had a jacket on for about an hour this morning. Have a great weekend Ann!

I think it is a Yorkie purse!! Except it doesn't look anything like Dixie. Hope you are feeling better, Ann!! Was that snow crazy or what? I couldn't see to drive home last night, almost had to pull over! Have a good weekend.

What a November picture! Love the purse- what great colors.

Yikes, not snow. Makes me cold just thinking about it. Duke that is a perfect Westie Silhouette. Looks just like you, just a different color. Try to stay warm.

Hope you didn't get to much snow! You can send it this way - I don't mind! The purse is adorable and that certainly is a Duke dog on the front as far as I'm concerned!

Congrats it's a great looking purse

congrats .... and thanks to Duke for setting us all straight.

How can we not be way behind in everything - it is the Holidays - I think we all should remember that - and hang on! teehee
(Meaning I'm always behind too).

Congrats to you for winning they look very pretty.

The ice and cold does not.

That bag is fabulous! I am dreading snow. Last time we had snow, we lost electricity for more than a week.