Yesterdays trip to Volant did not yield a whole lot of pictures. It was fun but several of the shops that used to be there had closed. I guess the rotten economy is hitting everywhere.
After we got done with the shopping we stopped at Wendy's to grab some lunch. While we were sitting there eating we noticed that there was something going on across the street. 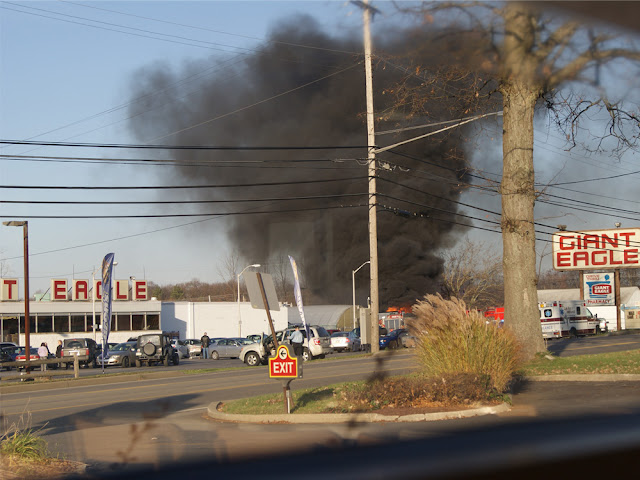 The ambulance and police had already arrived and they were waiting for the fire trucks. It didn't take long for the sky to fill with smoke and before long we could see the flames shooting up. While I was taking the pictures through the window I heard a loud boom. No idea what exactly was on fire, we assumed it was a vehicle.
Somebody was not having a good day.
Posted by Ann at 12:00 AM

when we happen upon something like that, we run out and go see. We have also been known to chase fire engines!

Well, it is a start, but if you ever hope to make it on the national news, I think you will need to get a closer to the action.

Blech - That's some serious smoke over there. Good thing you two were sitting in the non-smoking section ;o)

It sure does look like someone is not having a good day. Yikes. That car is a goner. Big hugs to that Duke.

Ooooh, skerry! I hope everyone was okay.

looks like smoke from burning tires, they make black smoke like that, and i would have been with ginny, I have a curiosity bump as big as a hippo. once we were stopped at a traffic signal, an SUV spun and turned upside down, i quick jumped out and took 3 shots. came home and emailed the info and photo to our news paper. they printed the photo with my name as photographer. somewhere in this house i have the newspaper, but where. i bet this one did not smell good.

Oh no! Thank goodness you were safe on the other side of the road! Hope nobody was injured.

glad it wasn't U, or your lunch

Oh, yes... obviously someone was NOT having a good day. What a bummer.

I'm just like Ginny... I am curious --and I would have gone there and checked that fire out... When I was a little gal, my brother was a volunteer fireman in our town. When I became a teen and started driving, I would get in trouble by following the firetrucks to see where the fire was!!!!! ha ha
Hugs,
Betsy

That's a lot of smoke. Hope no one was injured. Glad you weren't a part of it.
Happy Sunday Ann!

That's scary. I would have beat a hasty retreat - especially after the boom!

That's pretty thick black smoke, hope everyone was alright! Sorry the shopping wasn't as good as before but glad you had fun anyway!

EEEK! I'm guessing a vehicle too with all that black smoke. :(

You could see that from your home? Whew you were lucky. Sandie

That's a very intense fire indeed. When it's dark like that it's got lots more fuel to burn. Scary indeed.

My first thought was tires with that black smoke so it could of been a car. I bet it stunk. Sorry to hear of the shops - hope you had a fun day anyways!

Somebody definitely was not having a good day!

I hope you weren't too close. Those things can spread pretty fast.If it was a car the boom you heard might have been it blowing up.

Wow- that would sure get your attention.

OMG! Did you ever find out what happened?

You are so right someone really did not have a good day. Hope everyone was okay and good thing you were inside having lunch and not part of the fire.