Progress but nothing new.

So on Monday I made a little bit of progress on completing some projects that have been stacking up. they are repeats of ones I've already shown on the blog before though. Now I just have a million and one other projects lined up to do. That's half my problem. I have far too many ideas.

A while back I showed you a 2x4 turkey that I made. I had a couple more started and then their parts were sitting in a basket for quite some time. I finally got around to finishing them. I figured since it's almost Thanksgiving it was now or they would sit around till next year.

I'm getting a bit lazy with the pictures. All of them have been cell phone pictures lately. 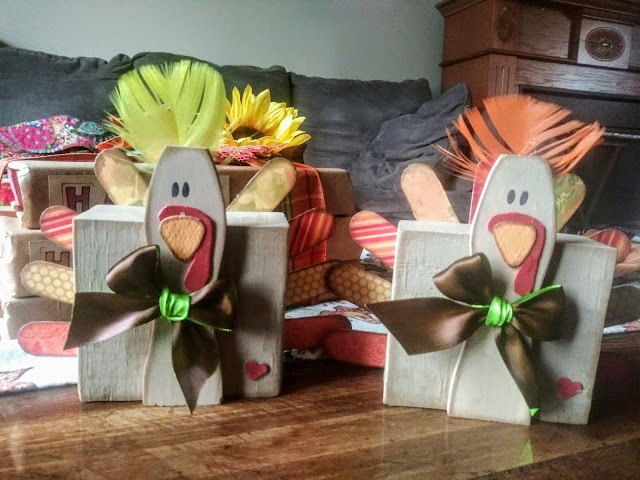 Aside from these, I also completed another set of 5 of the embroidery hoop ornaments. Now I'm out of hoops so I'm going to have to order some more.
Posted by Ann at 12:30 AM

They are so cute and funny! Nothing wrong with cell phone pics. Nowadays you can't really tell the difference.

I agree with Ginny, cell phone pictures work just fine and we appreciate whatever you take. I think the turkeys are priceless.

I enlarged the photo...they're so cute!

They are such cute turkeys...I just really like them.

Your turkeys are so cute!!! Photos are just fine.

almost all my pics on the blogs are now cell because I don't have to download from camera. lazy me likes the fact the cell auto places in the google cloud and I can access the photos from all devices.... in the camera they have to be dumped and them put in the cloud to be able to access. cute little turkey's.. looks like a lot of cut out work to me, can we say LAZY? that is ME

I think those are so cute. I think if I were the type of person who 'decorated' I would definitely want them...

So cute. You are so talented.

Have a fabulous day, my friend. Big hug to you and lots of scritches to Gibbs. ♥♥♥

Ginny. Thanks. The only reason I don't like taking pictures with my cell phone is because it has a scratched lens and the pictures don't turn out too good.

CheerfulMonk, It's only because of the scratched lens on my camera that I don't like them

Anni, thanks. Used up some scraps to make these guys

Grace, thanks. I'm planning on putting these on the table for Thanksgiving dinner and there will be one for my sons fiance to take home and one for my daughter

Oh how darling these turkeys are, Ann! I am the exact same way with projects... egads!! Now that I have an "art studio", I should be getting a lot more projects done, right?! Uhhh... no. *lol* Love, Andrea xoxo

Those are just so cute. Good job. You have a good evening.

Well you have been productive. The turkeys are really cute.