What's around your belly.

Gibbs is now sporting a belly band when he is in the house. 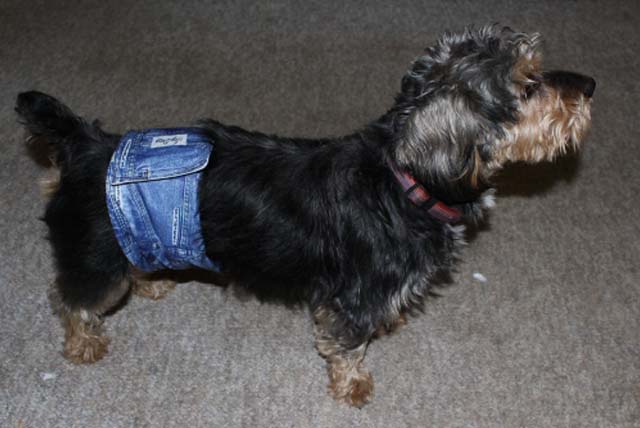 I purchased a pack of three of these. The one he's wearing looks like a pair of jeans, the one below is his bumble bee band and the third one is plain blue. 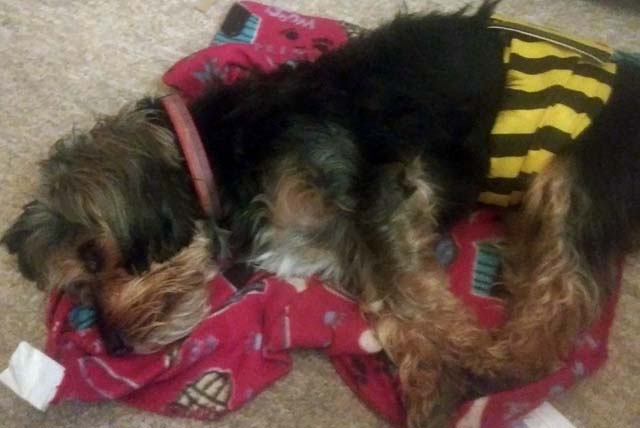 I tried to make some years ago but Wade wouldn't pay attention to what he was doing and he was wetting them faster than I could wash them. We have things much more controlled now and he does fairly well but there is still that occasional rebelious moment. With the belly band on him there are no worries. He's ok with me putting it on him and he doesn't try to get them off but he gets a bit freaked out by the ripping velcro sound when I take it off him to go outside.
Posted by Ann at 12:30 AM

What is this! Is it like a doggie diaper?? Pretty cute, if it is. You scared me at first, I thought he had maybe developed a hernia!!

Is he incontinent then? Haven't heard of this before but looked it up. Whatever he looks cute in the denim one, lol
Briony
x

Next thing you know, you'll be putting flip-flops on him! (Love the denim)

I was thinking getting them on would be the hard part. Glad you didn't have much of a problem. When I saw the title of your post my first thought for my own belly was fat.

I thought FAT as soon as I saw the title. the denim is cute.. did not know they make these. we have never had a dog that peed in the house, but ours are all big dogs, I think small ones have more accidents.. must be common if they are selling these.. glad he doesn't mind them.. looks like a doggie bikini

That is sure a plus that he does not mind them being put on!

I love the denim one and Gibbs is such a good boy to wear one of these.

Cute as a button even thought he has a bad habit.

Meant to write "though" not "thought."

I have a blogging friend who has two rescued greyhounds and is part of a greyhound rescue group. I make belly bands for the greyhounds as they are typically not housebroken and as my friend says "they are 85% bladder" and when they start peeing, they don't stop. These work to help them control that.

I make mine out of fleece and never charge for them. I figure if this keeps the greyhounds in a home, then I am all about making them to help them out.

Well, how interesting! I've heard of doggie diapers (which don't look very comfortable) but never a doggie band. I'm with everybody else.... if this is what keeps a dog in a home and it makes it easier on the owner, go for it. Gibbs could never have a better home than he has now!! Love, Andrea xoxo

I had heard of these but never saw one before. Tell Gibbs he looks quite dapper in his jeans. Is this a health condition?

Here is my new blog https://thejoyfulhomemaker3.blogspot.com/

Whatever works is a good thing.

Have a fabulous day. Big hug to you and lots of lovies to Mr. Gibbs. ♥♥♥

Briony, not incontinent but he has a problem with lifting his leg on things in the house if he's not watched like a hawk

Anni, Gibbs says don't give me any ideas....lol

Ratty, He hasn't given me much trouble at all about putting it on. He wasn't so sure about it at first but doesn't seem to mind.

Lin That is so nice of you. I bet they are very much appreciated too. I tell you these things are awesome and they sure save a lot of frustration.

Andrea, Well I don't know how comfortable these are. Sometimes I put them on him and he walks a little wonky LOL

Terry, I knew someone who had some home made ones but theirs were real thin. Would never work for Gibbs because if I"m not watching he's not opposed to peeing in it

JoyfulHomemaker, thanks for the link. I was wondering what happened to you

Sandee, that's for sure

I didn't know what these were! I would of never known what they were for if I saw him wearing it. I would think you dressed him up. At least they're fashionable and cute!!