The first thing is a sad farewell to the boss. When I first started at Shurfine, although his son was mainly running the store, Dick was still the owner. Up until a couple years ago he was still coming in to work a few days a week and taking care of the produce department. After he got cancer he stepped back and finally retired, turned everything over to his son, but he still visited the store frequently. Tuesday he passed away at the age of 83. He will be missed by everyone who knew him. 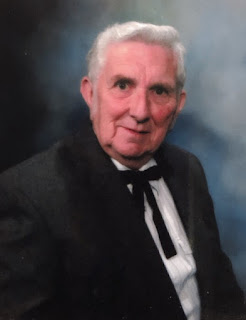 The second work related thing is a cake I did yesterday. For years there was a woman who ordered birthday cakes for her son. She had 3 sons that I know of but only ever ordered a cake for the one. She died several years ago and now he orders his own birthday cake. I found out that he absolutely LOVES our cakes and didn't want to celebrate his birthdays without one. 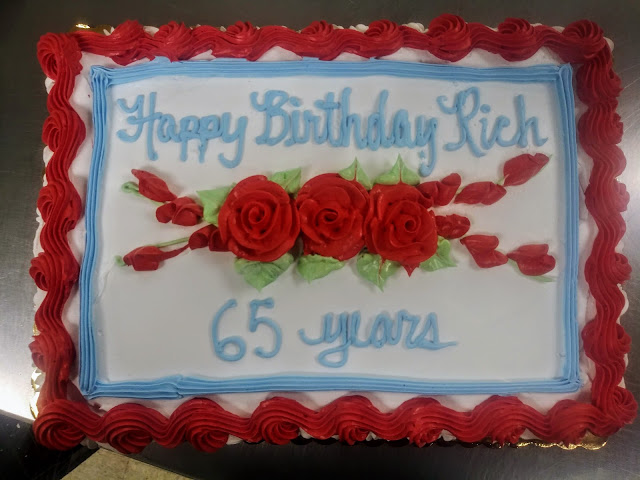 The cake is gorgeous, and very adult looking. How sad that he buys his own now, maybe there is no one left to buy one for him. It just seems not right that you should have to buy your own birthday cake. Dick looks like he would have been a fun person to be around.

My deepest sympathy in the passing of your boss. I know he was loved by many people. Your cake looks so nice; wish I had a slice right now!

This post is touching & tugs at the heart in so many ways!

I am sorry for the loss of your old boss, but isnt it wonderfulmthat you had one like him...that you and everyone will miss. And loved the other story about your cakes...such a good read first thing this morn.

I am sorry for the loss of this kind man in your life. He looks like a gentle soul.

What a lovely cake. I think it's neat that this customer celebrates his bday with one of your cakes, a tradition started by his mom. When we are alone, we are the ones to make some happy moments happen in our lives.

So sorry for the loss of your original boss. So sad.

I did smile at the son that loves your cakes. That was wonderful.

Have a fabulous day off, Ann. Big hug to you and lots of scritches to Gibbs. ♥♥♥

It's so sad to lose a good man and boss. I'm sorry.

Well, it says a lot about your cakes, doesn't it?! What a compliment!

I would like to think that maybe that lady made cakes for the other two but bought yours for the one cause he loved them. Sorry for the owner but he lived a long life. Still hard letting go. We both know that. Hang in there and keep on baking on!!

What a stately gentleman your boss was, Ann. They "don't make em like that anymore", as the old saying goes. And I think that cake is so beautiful. What a touching story about him still buying your cakes, even after his Mom passed away. That brought a tear to my eye, to be honest. Perhaps I am remembering years gone by, with my own Mom & how she used to buy my birthday cakes from a certain bakery in town.... now long closed. Love, Andrea xoxo

So sorry about your boss. That is so neat that the son orders that birthday cake. Ann, you have a terrific day.

So sad about your boss. Sounds like a nice man. Love that cake. You could make it for my husband Rich who will turn 65 in January!

I can understand why you are so loyal to that store...people and friendships like that are to be treasured. And good for the son to keep ordering the cake even though his mother has passed. This post brought tears to my eyes.

Two connections to you, the store and of course your cake making...amazing how some tradition just continues to live on. The store owner is now the son of the "boss" and the man and his birthday cakes from his Mom are still with ya all...

So sorry for the loss of the owner of the store.
That's a sweet story about the cake.

I always am sad when I read of the death of a former co-worker or boss. You have a talent for cake decorating, very nice.