I had such a productive weekend for a change. It's been a long time since I've had one of those that I felt the need to blog about it.
Lets start off with my computer/craft room, a.k.a. Amanda's old bedroom. (hold on, I'll get to why dryers can't fly)
Welcome to my room 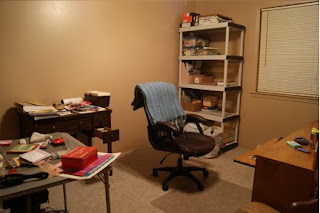 When I first took this room over I had some big plans for it. I never got very far with them other than painting the walls and new carpet. It's been a total pig sty lately because I haven't had anywhere to store stuff other than to stack it up on either the sewing machine or a card table or on the floor. Over there in the corner is the new shelves I bought to organize everything. By the way, I took this picture about 3/4 of the way through my cleaning. 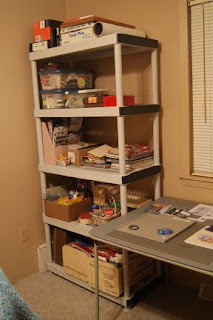 Everything on the shelves and off the floor. 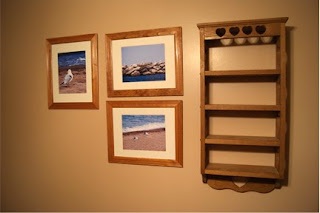 I even hung some pictures that I've had framed since last summer. I've been wanting to put these up but just haven't had the ambition. Now I just need to find a small shelf to put underneath the picture to the left.
OK, so about dryers and why they can't fly.
Saturday we went to Lowes and bought a new dryer. Wade has had enough of running the dryer three times just to get one load of clothes dry. The electric company probably loves the old dryer but we didn't. We picked one out and plopped down some money but couldn't pick it up until today since we don't have a truck. But, as luck would have it one of the guys Wade works with was willing to haul it for us today. 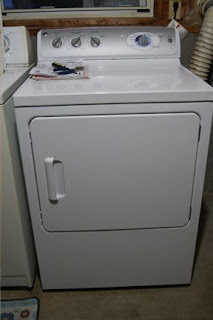 So here's the new dryer all set up. Pay no attention to the less than white old washer sitting next to the bright white appliance.
Anyway, they are on their way home with the dryer and it's standing up ever so nicely in the back of Bernie's truck. (see where this is going?) Yep, it decided to tip over. It landed on the tailgate and luckily it changed it's mind about taking flight. Can you imagine the poor guy driving behind them? It eventually made it's way to it's new home safe and sound and is now ever so quietly drying a load of clothes.
Posted by Ann at 6:45 PM

Yikes on the almost accident with the dryer. Glad it made it home. I can so relate to dryers that quit drying properly. Enjoy the new found freedom of laundry.

Cleaning up craft/computer rooms are a pain and sometimes the cleaning and organizing doesn't last very long. Well, that's what happens in my office. Drat.

Have a terrific day. Best regards to my pal Duke. :)

Oh GoodNess! If it was taking 3 times for clothes to dry, was the outside vent clean? That's the first thing we check...even on our new one...Bet you love the new one though!!
Glad nothing bad happened!!
hughugs

Sandee, yeah, me too. The cleaning never last long for me either that's why I have to brag about it when it is clean and organized (for the moment) Duke says hi

Donna, the dryer we had was pretty old. It was time for a new one anyway. The washer is next, it's been repaired a couple times already so it could be just a matter of time.

I got a super awesome Whirlpool Duet front loading washer/dryer and it is AMAZING!!!! I love them so much.

Whew, close call....and kudos on the cleaning!! I seem to keep kicking THAT can down the road....

That would be a nasty accident if it happened. Thank goodness!

Yes, you did get a lot accomplished! Looking good too. Boy, do I hear you about the three times through to get a tub of clothes dried! That's my baby! My husband just recently took the whole thing apart and we thoroughly cleaned away all lint we could find and it is a little better.

Sweet wishes to your sister on her birthday!

So nice visiting with you!

You're making great progress on your computer/craft room! I like the photos you hung on the wall. And phew on the close all with the dryer! Glad it made it safely and hopefully your electric bills go down now!

I know you are thrilled to have the new dryer...what an exciting trip home! I am anxious to see what you do with your great room! I like the pictures and shelves. Keep us posted on your progress!

Wow..Glad to see the drier all intact...and I like the craft room decor.....

Love your little writing space. I really need to create one of those. Ugh...I'll be so glad when I can leave this "too small" apartment and settle into a nice, comfortable home.

Enjoy the dryer and I too am glad...dryers can't fly

Well, thank goodness it didn't break!
btw, I have an award for you on my blog, Ann!

I'd call that one a biiig blessing! Depending on how fast you were going, that could have been a monster of a mess. WHEW!
Love your space...mine is an absolute disaster area ;o)

Glad the dryer decided not to fly. They are pretty rugged. If it had been a washer you might have had trouble with it.
I love the new shelves you have. We had some of those. They are wonderful organizers.
Take care and keep crafting.

I love those new shelves...they look so sturdy. Where did you purchase them?

Those pictures are beautiful on that wall! :)

Wow, you are so organized. If you're looking for a even more productive week, stop by my place, I could use a little organization.

Very few of us have dryers in Arizona. The only "dryer" accidents I have to worry about are bird droppings.

I am glad the dryer made it home safely! Your room looks great. I love the look of organized things. It makes it look so inviting.

I've got my own issues with clothes dryers LOL

There seems to be a run on new laundry appliances lately. I hope it's not contagious, though i could use a new washer - rattle, bang...

I'm so impressed with the newly organized space. Love the pictures on the wall too. I'm hoping for some of that inspiration once I get back on my feet. Because my room is so cluttered right now I've been unable to wheel myself in very far. I hope you enjoy your new room and your new dryer. What an exciting day indeed!

Vange, i looked at those but just in passing, we didn't have that much to spend

Will Oaks it doesn't happen often

Vanilla Seven yes it sure would have

LDH yeah Wade finally just gave up on the old one

Kim if I ever get any more done I will

Roschelle, it's nice to have a room all to myself

Duni aww thanks so much

Jen yeah can you imagine

A Marie got the shelves at Home Depot, I think they were only like $35

Anne yeah too bad it doesn't stay that way

Grace i do recall reading something about that :)

Buggys rattle bang? take the tennies out of the washer and it won't be so loud...lol

Lin yeah, its the little things :)

Lenox knits I hopoe I can keep the momentum going

News at 11 man is killed by flying Maytag.

After seeing your office at the 3/4 mark and knowing it will be even better once it is all finished. I now feel shamed and must do the same tomorrow to mine.

However seeing how I have maybe a total of two square feet of floor space without anything on it, I should finish sometime next week. Hell I might even finish my taxes while I'm at it. Arghh

We got a new one about a month ago - and we're still excited about it!

Bonehead, I'll really be excited if it helps with the electric bill

Glad you have a new dryer and it works after falling over!! Oh my !!!