While I was out.

I'm sorry but yesterday I just didn't get around to putting up a post. I guess you could say I was just being lazy. I thought an evening of lounging on the couch with my favorite little white westie would be kind of nice. It was strange though, because usually he likes to hang out with me, but last night I don't know where he was.
Well today I'm feeling just a bit more peppy and thought I would share something with you. Remember I told you I got that cuttlebug? Well I did some playing around with it and made a couple of little notebooks. I'm not going to show those to you though because those were just to practice with and I thought I would wait till the next set before I show anything off. I did take pictures of them though and then just did some edits to them.
This was the first one that I did. 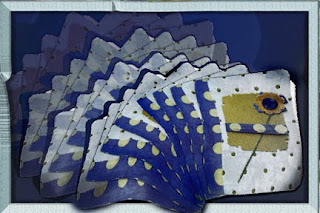 This next one, it seems to me that I just did a bunch of distorting to the above picture. Then I layered on a few older photos until it looked like this. I can't for the life of me remember exactly what I did though and now I'm even wondering if I even used that first picture. Oh boy, I think I'm in need of a vacation. 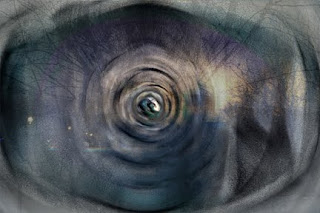 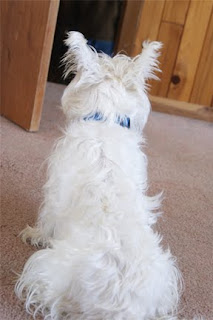 Hmm, I wonder what brought that on?
Posted by Ann at 6:50 PM

I never get over just how cute Duke is!

Sandee, I wonder if Duke and I need to have another talk...lol

Tell Duke that I miss him mom! I bought something for him today while shopping with Billie and I think he is just going to LOVE them, I mean it! Anyway nice pics and stuff. ttyl, Amanda

Well Ann dear what a dark horse you really are - these pictures are rather good. The second one is deep like someone representing deep thought ... I think I would be tempted to test it out on perhaps frame it and sell it ... pocket money for Duke. "Woof!" Yes I'm sure he agrees with me.

We didn't know you made any notebooks! We'd love to see them! :D

That second image is plumb spooky. Perhaps, "Down The Drain," might be a good title for it?

That a boy Duke. Love those first two pics

I love the second pic. I think it's great how you can create stuff this way...when I try anything I usually end up with a big mess which couldn't even compare to a 3year olds painting!!

That second picture is really fascinating! Eyeball, rose sort of thing. Love it.

Scared him with that last photo, huh?

Duke is so cute, even from the back end. And you, are extraordinarily crafty. I am impressed by your photos.

Those notebooks are fantastic and of course Duke, well we all know how precious he is :)

I like the daisy one. And the second one looks like some strange vortex! Maybe Duke was scared he was going to get sucked up by it!

Enjoying the Cuttlebug? I used Sizzix years ago and it was HARD! Don't miss it, nope. Cool books :D

Duke is messing with you :P

Anonymous a.k.a. Amanda. I think he knows but I want to know why you miss the dog and not your mom...lol

Beaded tail I dont' know what it means but Duke says to say thanks..lol

FishHawk, interesting title choice. I think I like it

Duni why thank you

Roschelle Duke says thanks but isn't he supposed to get a treat now? :)

allotments4you don't feel bad, I don't show my stuff that looks like that

Buggys I layered on a picture of some bare trees and thought it looked like eyelashes. I'm glad I'm not the only one who saw an eye

Grace I don't know what the deal was there

Anne yep just cute from every angle and thank you

Poetic Shutterbug eh, I didn't get a close up of the corner that wasn't covered but they looked good from far away...lol

Cinnamon girl maybe that was it. He usually doesn't go off so quickly

vickie so far I am but I want more dies. This seems to go through pretty easy

What a great resource!