When you make a dinner that requires a can of mushrooms and you purchase canned ones rather than fresh, what do you do with the can?
Well this is what I did with it.
First I covered it with some scrapbook paper then glued on some images of old seed catalog covers that I got from The Smithsonian Institution Libraries.  I brushed on some mod podge, used a little stain to make it look old and then sprayed it with some clear acrylic sealer. I even let it dry in between each step. 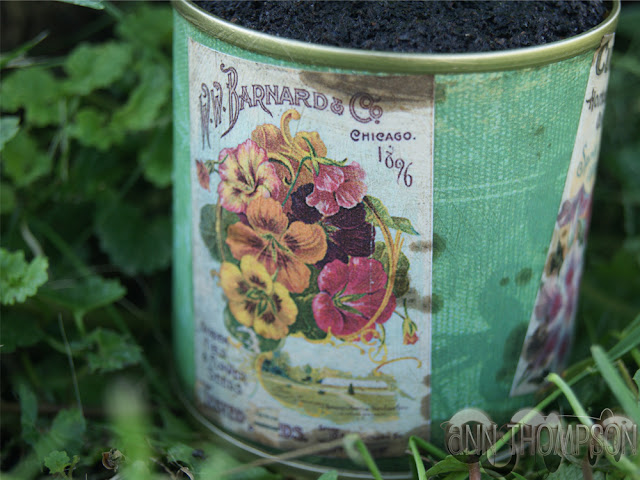 This looked like it needed a flower growing in it but not having a green thumb I knew I wouldn't keep anything alive for very long. Fake works better for me. If you are going to have fake flowers you may as well have fake dirt too. I cut a circle from cardboard to fit just inside the can and covered it with my fake dirt. 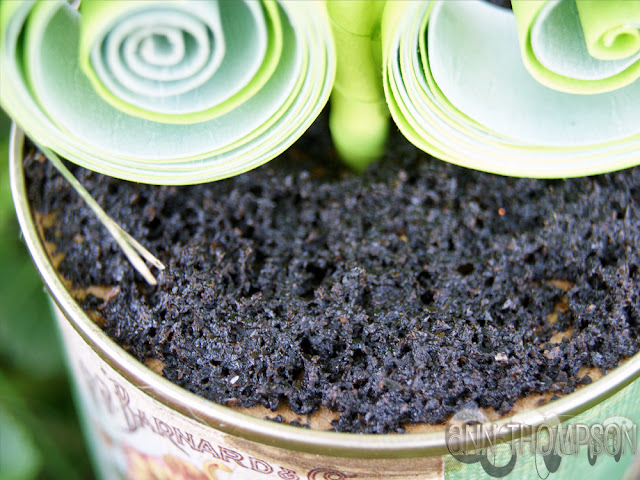 Can you guess what my fake dirt is? Instead of dumping out the coffee grounds after I made my coffee, I dried them out and then mixed them with glue. I spread that on the cardboard circle and let it dry. Wallah! Fake dirt. Yeah I know I missed a few spots but this was pretty much an experiment to see if it would work any way.
Now all I need is a flower growing in my mushroom can. Another jumbo quilled flower with a cute little flower button glued to the center. 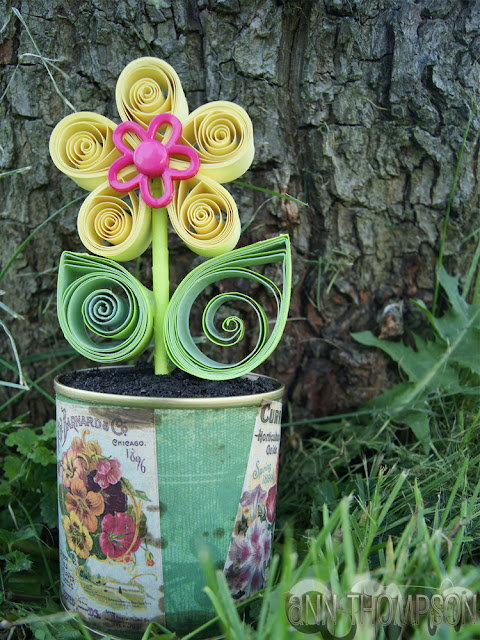 I may not have a green thumb but I think this would qualify as a green craft project.
Posted by Ann at 7:00 PM

Now that rocks. I love it. See you are so crafty. I would have never thought about the coffee grounds glued together. Awesome.

That is just Too Cute!
Where DO you come up with all these ideas?!!!
If it rains, did you waterproof it?
hughugs

That is so creative and so cute! I don't know how you come up with all these crafty projects but it's sure fun seeing them all!

Ann, that looks awesome! I love your faux dirt, that is ingenious,!

You sure come up with great creative idea's. This turned out wonderful and so spring looking. Plus you recycled. I just love it.

What a lovely idea ... I suppose you could also semi-bury some cans at the back of the garden border and plant things in them so that they would be raised up.
Windmills are quite popular in the garden centres now .. perhaps it might be possible to make some using your quilling techniques.

Ann! This is an adorable idea! Oh you are a crafty creative woman. Yup... I like it!

That is just so neat, Ann... I love it... You never cease to amaze me --when it comes to talent. You got it, Girlie.
Hugs,
Betsy

Dear lord - How in heavens name do you think of things like this? I mean this is no slap-dash little project - this took time and thought and planning...Dang you're good! (Love that big flower!)

This is amazing, and the cutest thing EVER!! You have an abundantly beautiful imagination!!! And we all benefit from it!! Hey, that bunny rabbit made from a straw hat, how did you get the brim pinched back in the middle? Haven't been able to manage it with hot glue or glue dots. Did you pin it or something? But I am happy that I know how to make fake dirt now!!!

Just a quick note to let you know that a link to this post will be placed on CraftCrave today [26 May 02:15am GMT]. Thanks, Maria

I love the old style label you made for the can.

Definitely a green craft!
Love the little mushroom can transformation and the "dirt" was a great idea. Your quilled flower is pretty too...the perfect touch.

Well aren't you the clever girl? I love it! Particularly the scrap paper and seed packet (love that vintage look!) Great job, but are any of us really surprised? Um...no ;o)

How creative is that! A gold star for you :) xx

Oh my gosh, that is so cute. You are becoming a craft genius Ann. That is really great. You should find a contest and enter that. Love it. Have a great day. So what is next?

Yawn. (However, Arlynda and her mother would be very impressed. If she wasn't so busy working so that she can go out and buy all of the things that I want, it could even be said that she is very impressed. Okay, I know that sounds a little crass, but my wife wouldn't have to work so hard if her mother would just go out and get another job. 73 isn't too old to still be working--is it?)

Dang...how creative is that?! I love it! And I love that fake dirt..how inventive ;)

This is excellent Ann...I have to admit to not being fond of fake flowers but I would love to have this in my garden.....I wonder though if you quilled it in paper/cardboard...and if so how will it stand up to the rain??

That was a fantastic tip. Love the coffee grounds idea. And of course your whole project came out wonderful.Great job as usual.

you are just soooooooo creative. I would never ever in a million years think of something like this. it is really cute. i don't have a green thumb OR a crafty thumb. just thinking of this idea makes me clap for you... I bet if you put these on ebay you would sell a ton of them

Oh this one is too cute! Really. I love it so, is mine in the mail?

SO darned cute, Ann, and I love your idea for making dirt from coffee grounds. It brought back a Halloween memory of slathering the cheeks and chin of one of my boys with corn syrup and then coffee grounds to give him a fake beard when he was about 10. It actually looked pretty authentic (from a distance)! He was a hippie that year - embroidered shirt, love beads, peace sign. And now he has a real beard, no need for the coffee variety. :)

Okay - now I know you are way more talented then I am - in every way, shape. or form!

This is gorgeous. LOVE IT.

How did you do the flowers?

Now that is my kind of flower! No watering, no bugs, no messy dirt, and it is PRETTY year round:)

What a cute flower! You have a green thumb just like mine. If it's green and alive, I will be sure to kill it somehow.

That turned out terrific! LOL, I recognized the seed catalog source that I featured back this past winter! I love that web site!

I love this idea. Very cute! Thanks for posting the link on my blog.:)