I have a story that is sure to make you laugh. The names have been changed to protect the innocent. 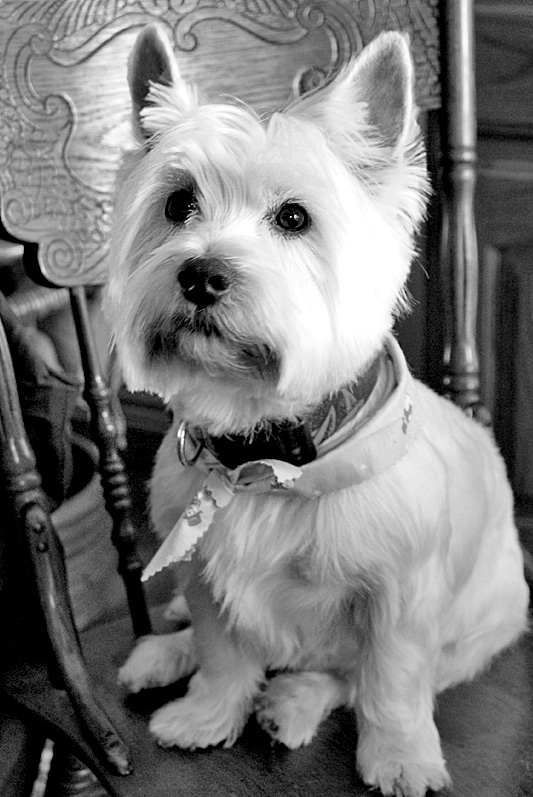 On a cold Saturday night in Nennsylvania, Nann and her little dog Nuke were enjoying a quiet evening at home. Around 11 pm Nuke wanted to go outside but since Nann was already nice and comfortable in her pajamas she chose to put him on his tie out rather than go out with him. After giving him a sufficient amount of time to take care of business Nann called Nuke to come back inside but Nuke didn't listen. Frustrated, Nann put on her husbands boots and stepped outside to get Nuke. She was startled to see that he was nowhere in sight. She frantically ran through the yard calling his name. She looked under the bushes and in the street but no Nuke. She became worried and ran inside to get her coat because she was still only wearing her pajamas and was getting quite cold by now. As soon as she got back inside she heard Nuke bark. She opened the door back up but still Nuke was nowhere to be seen. She bent down to look under the deck and sure enough there was Nuke. His tie out cable had gotten stuck and he couldn't come out. Nann started to walk towards Nuke. She didn't see the tie out cable buried just beneath the surface of the snow and fell face first right into the cold fluffy accumulation. Such a shame that it couldn't have been captured on video because I'm quite sure it would have been hysterical to see
Posted by Ann at 12:30 AM

Holy Cow! Bet you were COLD!!! Poor Duke...hope you were ok too! It can get scary if you get stuck outside by yourself!! xo Chloe and LadyBug

At least it was a soft landing and Nuke was safe and sound!!

Woof! Woof! Oh Nann, good thing it was fluffy. Hope she changed her pajamas. Hope both of you guys were okay. Lots of Golden Woofs, Sugar

This sounds like something Nanni would accomplish. And I bet it was namn cold too.

It was karma for putting poor little Nuke out there all by himself. ;)

Was he giggling at the snow-covered Nann?

Nannuke of the north is as entertaining of a story as ever!

Oh Nann, i can't help myself, i am ROFL and can't stop. i am so glad only your dignity was hurt and that Nuke was not gone.. he is so adorable in his black and white today that i can hardly believe this story was his...glad there was a happy ending.

I can see you doing this Ann. Bwahahahahahahahaha. I'm just glad you didn't hurt yourself.

Have a terrific day. My best to Duke. ☺

Ohhhh - not so funny story...hope everyone is well...and warm and dry.

Oh my gosh, I can just picture it! Hope you and Duke are okay!!

Oh my goodness - how cute of a story was that! I can picture that too! lol

YIPES.... You could have gotten hurt. Glad you didn't --and I'm sure that Duke was glad to get rescued and back into the house....

Too bad there wasn't a nice video of this story though.... ha

I think that maybe there is a lesson to be learnt there :-D
I do hope that Nann and Nuke are both unharmed in this story.
xx

We admit, we giggled! Good thing Nuke is cute! Was Nuke really chasing bunnies under the deck?

Wow, that could have been a very dangerous situation. But, I giggled just a ittle okay?

Please don't tell Nuke...uhhh....Duke...that we know who this story is really about!

I am glad you made it in okay though. I have done worst things than this. Don't feel bad!

Haha! Next time Nuke goes out he better take the camera with him.

Funny but oh so cold! I would of been frantic when I couldn't find Duke. I hope you were both OK!

Poor little "Nuke" and poor little Nuke's Mommy - what an adventure on a cold winter night.

Keep warm ... hopefully spring is around the corner,
Katie

Poor little "Nuke" and poor little Nuke's Mommy - what an adventure on a cold winter night.

Keep warm ... hopefully spring is around the corner,
Katie

Poor Nuke and Nann...it could have been worse if Nann had fallen on Nuke.

Poor Duke, poor you! I hope that you are both recovered now! Wishing you a great problem-free weekend!

Oh, this is some story! Happy all is well now!