The saga of the cake

I thought yesterdays cake post was a one time deal but since so many were curious about it I thought I would continue the story. 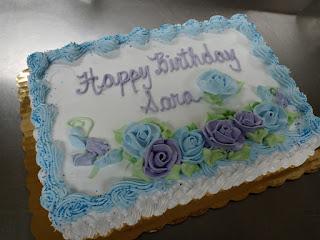 The reason I know about the demise of the cake is because it was for an employee who was celebrating her birthday. She told another employee who told me the story. Let me just say that this girl and her boyfriend are a daytime drama all by themselves. Both are young, as in early 20s. The boyfriend has no job and is supported by the girlfriend. She frequently comes in to work with bruises and tells everyone about how he beat her up. She'll say that she kicked him out but two days later he's back. In the beginning I felt sorry for her but the more I hear I just can't any more. When she's telling the story about how he pushed her around, or tried to choke her or whatever else, she's smiling and laughing about it. Several of us have told her she needs to dump the guy because things will only get worse.

Aside from the boyfriend issues, let me mention about the dog who sat on the cake. She just got the dog. Ok, so what's wrong with that? Who doesn't like to have a pet? Well nothing is wrong with getting an animal if you can afford it. This girl was crying that she didn't have any electric because it had been shut off. Call me crazy but getting the electric turned back on should come before getting a dog.

The poor dog! It deserves better than that.

Crazy world!! That's all I can say.

our world has gone quite mad. i feel bad for the dog

I agree - poor dog who deserves so much better. Early 20s - hmm, sounds hopeless. Thanks for 'the rest of the story'. lol

I hope she wakes up before it is too late.

Oh gawd... I have no more words than that. Oh gawd! ~Andrea xoxoxo PS~ I can guarantee you that if he's hitting his girlfriend, he's going to abuse the dog too. I hope somebody's watching out for it and will report abuse.

She sounds like the type of person who would drive me crazy to be around! I feel sorry for the dog!

Sorry for her and the dog.

OH, the follies of youth! All I can say is, I hope these decisions are a big learning experience for her. And people like her boyfriend will continue to beat her up worse and worse as long as she will take it.

P.S. the end of your story is so much more interesting and shocking than the first part!!

P.P.S. The Mad One is right, I feel bad for the poor dog. The boyfriend will likely kick and beat it up as well.

She's a taker. She's looking for someone to feel sorry enough that they will give her money. I don't care for these kind of folks. They take, take and take as long as you'll give. Then when you quit they get nasty.

That's so sad, in so many ways...the lass is in big trouble and doesn't seem to either know it or doesn't understand the consequences
My bet she's got the dog for both protection and someone who really loves her.
Where are the parents of both of them...because you and your workmates can't have this responsibility.
So sad about the lovely cake

Oh my, she needs to get out of that relationship. Praying she can do that before he hurts her really bad. I don't know why people put up with that kind of abuse.