Before I started having the eye issues I had been taking frequent pictures out in the yard. I have quite a few that haven't made it to the blog yet. I also had purchased Photoshop elements 2021 for the new computer. I only used it a handful of times and now it won't open. When I went to do some searching I discovered that this is a very common problem. Even when people have gone through customer service and followed their steps it only worked a few times before quitting again. Now I'm feeling rather stupid for spending the money on the program that I always loved in the past. It seems to me that things worked much better in the past when you downloaded from a disk rather than from the website.
Any way, I wanted to be able to edit a lot of the pictures I've been taking but now I guess I can't. Or at least not the way I had intended to.
Enough whining. I was out in the yard one day and saw a bird land out by the tree. I couldn't really tell what it was but I snapped away. I was pleasantly surprised when I discovered it was a bluebird. I have never seen one in my yard before. 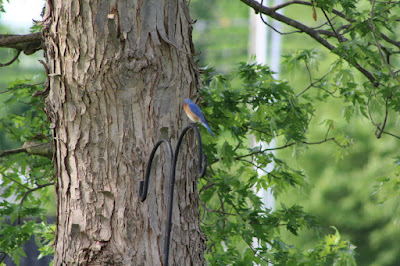 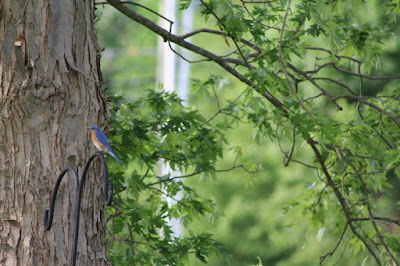 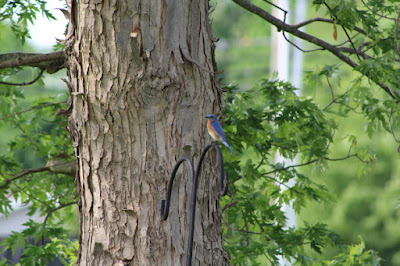 What a cute bluebird. How frustrating about your editing program. But your computer should have a good editing system in your picture files. That is what I use, I can crop, straighten, change the color and contrast and lots of other things.

Your bluebird is a treasure!!
Today's technology sucks! My problem with software (not downloaded from site) is...every time the computer updates, the program has to be reinstalled!! What a pain.

I have never seen a bluebird, with my own eyes I mean, this one is so cute. I wonder if it is caused by windows 11, did you search microsoft for problems with PSE? someone there might have a fix. with your eye problems added to the pse your frustration levels have to be over the top...good luck

I hope you can find a solution to PSE...I either use what is on my newest computer or an old program that does not supported any longer.

I love the bluebird...I have never seen one here st this house in all the years we have lived hete.

Yes, I 100% agree with you, Ann, about things downloaded from a disc... years ago. Stuff worked much better then. I do *not* like buying things you then have to download from the internet. The older I get, the more I'm NOT liking the internet at all. It's useful for 3 things for me: to stay connected with my blogging friends, to order curbside grocery pickup from Walmart, and to order things I need from Amazon. Other than that, I don't do anything with my computer anymore. Still praying for you about your eye, kiddo. Hopefully you're seeing improvement. ~Andrea xoxo

I use an older version of PSE and that works okay for me. But, I use it mostly for work, so I don't do much more than spiff up the photos for publishing..so no real fancy stuff.

We have bluebirds at our new house! They are sooo lovely! I am thinking I will have to put up some houses for them at the edge of our property. Its fun to find new birds and plants here. I'm glad you have a bluebird (of happiness)!

Fabulous on-line (free) photo editor - ipiccy.com (ipiccy.com). You edit on-line then save to your computer. It can do anything the fancy editors can do (including erase backgrounds) so many editing functions it can actually be overwhelming! But so fun to play with - it could be a rabbit hole in the beginning. Try it! You have nothing to lose except some time while you play!

The bluebird of happiness :) Such a cute bird! That is terrible about your editing program not working and it being a problem reported by others. Seems like the company would have thought of some type of fix for it by now.

That is a bummer about that editing program! Can you get a refund? I would love to see a bluebird in our yard. I don't think I have ever seen one in real life!

Love the bluebird.
I edit my pictures with Preview on my computer and it works great.

What a great capture!! Such a brilliant total blue, a beautiful bird!
Oh I have trouble download in my iPhone pictures to my computer takes forever!! I know pictures can be frustrating. I sure hope your eyes are better! Take care, Ann.

Beautiful bluebird. I feel especially blessed each time I see one.

I agree with your first paragraph. I hate the constant changes that keep happening. I'm getting to old for it. Are you taking your pictures with your phone or a camera? I edit photos on my phone all the time. The bird photos are awesome, you captured him well.

I'm glad you had such a special visitor to your yard. Have a great week.

I'm sorry you're having problems with PSE. I have the 2021 version and it's been working fine with my Mac. 🙁

Wish I could help with that program. These glitches can be frustrating. Your little bluebird must have been a sweet surprise. It’s a beauty.