The announcer gave the go ahead to take pictures and out came the camera again.
It was an extremely warm day and my friend Debbie and I chose to watch much of the dancing from the shade of some near by trees. I did move up close to get some pictures though.
I can't tell you what the dances were, I'm afraid that what information I did hear melted out of my brain before I reached home. 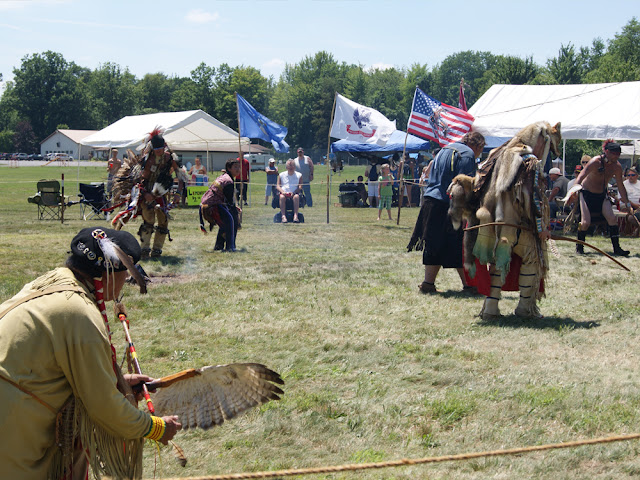 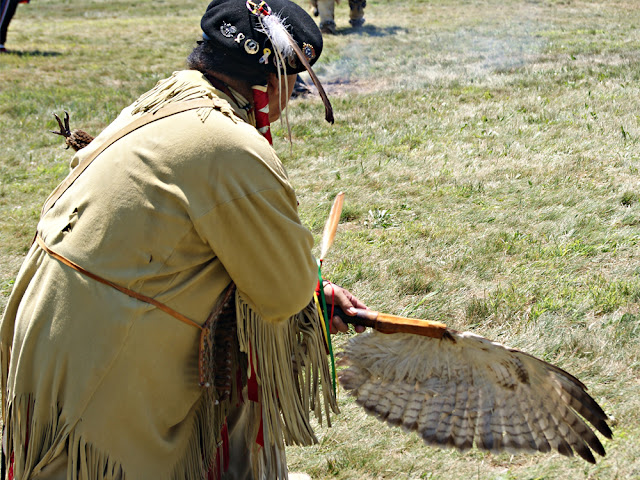 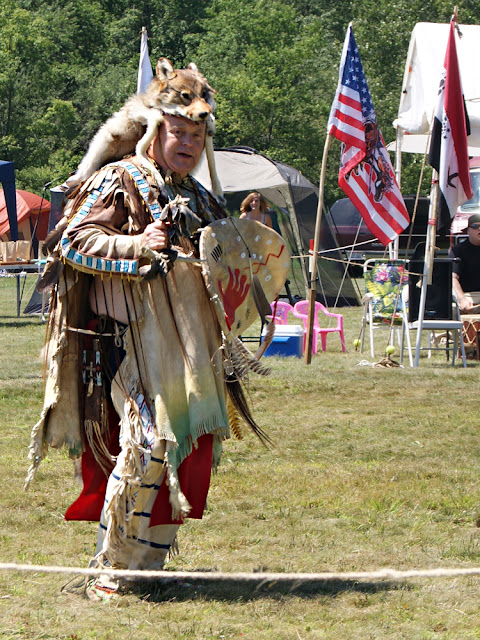 This next guy was my favorite to watch. I found the way that he preformed the dances was fascinating. 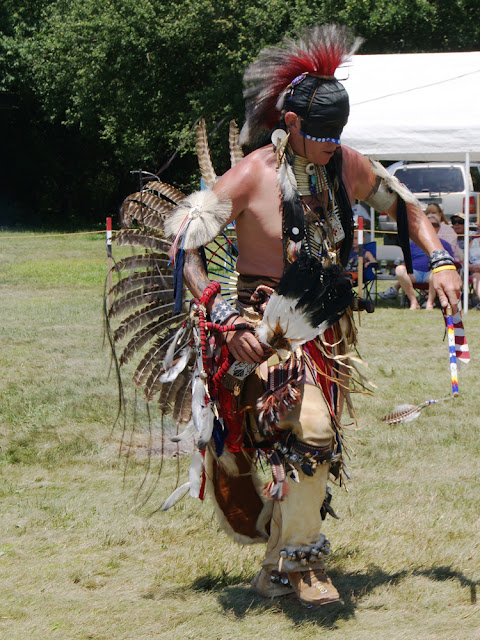 There was a younger boy who was dressed very similar to the guy above. I happened to be walking by him as he was bending over to pick something up. His feathers were just begging me to take their picture. 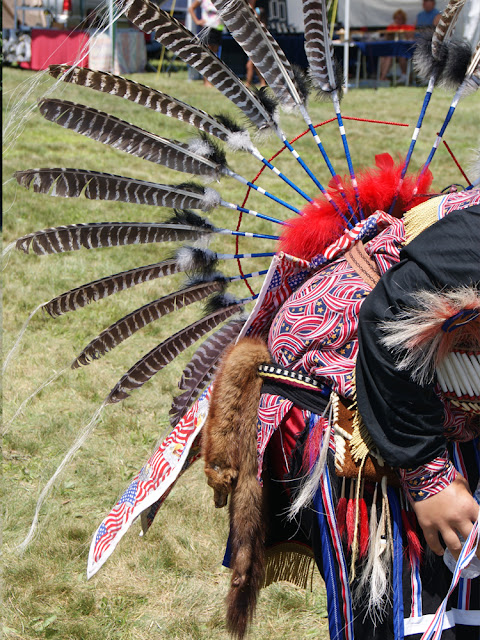 I can almost hear their chants and the bells on their feet! Great photos Ann!

That last picture is quite stunning. It is the first time I have seen a man with tail feathers!

I am wondering how you got to this weekend and what is it for?

Meaning what is supposed to happen?

I liked the costumes and tail feathers.

I'm glad you had such a great time and your certainly captured some great shots.

What a great ceremony and for such a good cause. Did you hear about the water walkers who walked a pail of water across America from various water sources and then melted them into the Great Lakes, MI (I think) but you can find Water Walk on Google or Facebook...

If you're interested about reading my one and only Powwow experience, please feel free to look at my post from last April. I had a BLAST!
Here's the link:
http://crochetingingeorgia.blogspot.com/2010/04/my-powwow-experience.html

Thanks for sharing this with us. You took great photos!

Sorry it was so hot for you all, Ann... I would be like you---standing under the trees. I cannot stand the heat now.

BUT--you did get some great pictures of the Native Americans. Thanks!
Hugs,
Betsy

I just love these pictures of the Indians. Great job getting them. What fun to see them, that is for sure. Have a great evening.

Ann, it looks like it would have been a REALLY interesting event. I love the last pic, of the little boy. It has such a neat, artistic quality to it! Did you plan it that way? That's awesome!

Love the pretty feathers but I gotta say...the dead animal on the man's head is kinda creeping me out!

The traditional costumes are amazing!

Thanks for all the pictures - yesterday and today's!
What a wonderful event to watch. How I wish I could have seen it in real life - but you've given me the next best thing. Thank you! xx

Oh my, what a time Duke would have with those tail feathers...

Great pictures Ann. But I am afraid you might be in trouble. Either you are going to be attacked or it is going to rain on you. I believe I saw a rain dance and a war dance.LOL

Great costumes, it would be tough in the heat.

these are fantastic, love all the colors. i am wondering how they stood the heat dressed like than and jumping around. i would have had a heat stroke, I mean they are in the blazing sun. great shots

Wow.. where didya go this time Ann... this is super duper awesome dances. Lookit all the costumes.

Sorry we haven't been around much.

This past weekend we went out to eat and there was a large party celebrating a couple's 45th anniversary. They had an Indian dancer--it was really interesting to hear and see.

(How did I miss this yesterday? It showed up in my reader as new on Wednesday??? I hate Blogger - I hate Google! )

Ann, You captured the Spirit of the Dancers well!

It looks like they would be very interesting to watch dance.