A few from Christmas

I've been so busy being a whiner that I never got around to showing you some Christmas pictures except for that one of Amanda.
A couple of you had said that you were curious what it was that put that smile on her face. Well, she went to a place called Longabergers. She fell in love with their stuff and let me tell you, it's not cheap. Although they do have some tote bags that are pretty nice and very reasonable. Amanda has a couple of them and I really do like them. So anyway, she found these mugs that were $40.00 for a set of 2. I told her that the dollar store sells them for a buck and you don't have to get upset when you drop one and break it. She wasn't buying it so I bought the pricey mugs. 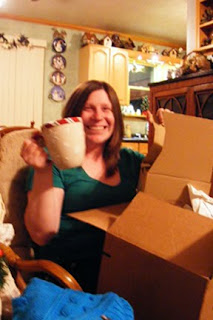 The picture isn't very good but you can make out what the mug looks like. They are nice and they are huge but more than I would pay if it was for myself. They were actually on sale when I bought them so it was only $30.00 for two. Still way too expensive in my book.

Duke dressed up in his festive red sweater that Santa brought for him. He was a little too excited so getting a picture of him that wasn't a total blur was not an easy task. 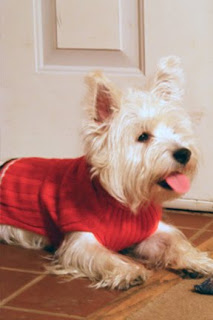 After we opened gifts Amanda and I were playing with the camera and trying to get some good pictures. I thought it would be nice to get a picture of the two of us in front of the tree so I set up the tripod and used the timer. This first one was really odd. I have no idea how this happened. All I did was set the timer and then jump over next to her. I swear I did not do anything to this picture at all. Check out my face. It looks like I'm a ghost and you can see right through my face. 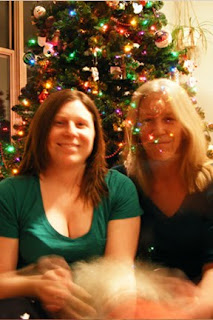 I wonder if I am the ghost of Christmas past, present or future?....lol

This next one was taken exactly the same way on the exact same settings. I did fix the lighting and color on this one a little but no ghosty look to this one at all. 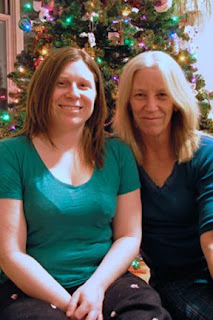 That is freaky about the "ghostly" photo but the next one of you both is lovely! Of course Duke is adorable in his red sweater! Thanks for sharing your photos!

Whoa...ghostly is right! Duke is so cute in his sweater. I love it when they get so excited! Glad you had a nice Christmas. Wishing you and yours a Happy, Healthy and Prosperous 2010!

Awww, that is a cute photo of you gals together! And Duke looks awfully snappy in his new sweater. Does he act differently with it on?

Beaded tail, tell me about it. I would like to know how I did it...lol

Lin no Duke pretty much acts the same with or without it. He does love his sweaters though, he gets all excited when you pull one out.

WoW! That IS a cool shot!! Christmas Future? Nice!!
30 dollars? Goodness! I'm with you!
Enjoy the night Girl!hughugs

Wow, those are some pricey cups indeed. Wow. I'm glad you got them on sale. Well, ten bucks is ten bucks.

Duke looks adorable as always. I love dogs to pieces.

There you are, transparent and twinkly ... nice look! Pretty pictures of everyone! I love Longaberger too but never did splurge, nice stuff though. Your dd has good taste ;)

Hi Ann,
You get a ghost-like appearance when you have a double exposure. Your daughter sat and waited for you, while you pressed the timer for the shutter and the camera took a long exposure on account of the lack of light. On the next shot you changed the lighting, used perhaps a flash or an extra light and the camera took a shorter exposure. Thus no more ghost!
I took photography in college, before digital photography, so we learned the basic principles thoroughly.

My sister-in-law sells Longerberger baskets, so I am familiar with them. Good quality, but more than what I can afford!

That 1st photo really is kinda' wonderful and spooky--I thought it was a multiple exposure somehow? And I LOVE the way your puppy looks in red--just lovely!

A little spooky but double exposure explains it. What great shots of the two of you and your little furry guy - he's adorable. I'm glad you had a good Christmas and I wish you the best in the coming New Year.

Maybe that was the holly-jolly leaking through? By the way, Duke looks quite handsome in his sweater.

Great mugs (although I'm with you on the cost - ouch!) That is a mighty strange strange photo (you didn't miss a bunch of meals before taking it, did you? ;o)
Oh, and Duke? You look positively dashing in your Christmas ensemble!

I like the ghosty pic. You and your daughter look like twins, my gosh. My husband likes unusual mugs and big mugs - on sale - $15? A bargain LOL

The more expensive the mug, the better the coffee tastes!

Hi there! What great pics; even the "ghostly" one is cool!

Wow, that "see-through" photo is really cool -- especially the way the Xmas tree lights twinkle through your face.

You and your daughter are perfectly lovely without any effects. Hope you have a very Happy New Year.

you both are very beautiful! wishing you a very happy new year...hugz!