A tale of Christmas past

I'll start this off with the edit I mentioned yesterday then I have a story to tell you about how we used to spend Christmas morning. 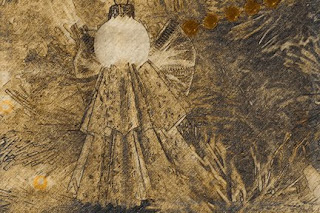 When my children were growing up I had a habit of over indulging them at Christmas. It wasn't so much for them as it was for me. I loved the holiday and the giving so much that I just couldn't get enough of it. On Christmas morning, the living room looked as though Santa had emptied his entire sack of gifts right there under our tree. It was pure heaven to see the smiles on their little faces as they dove into gifts and ripped open each and every one of them.

As the years went on my enthusiasm started to dwindle. I still loved the giving but it was the fact that I spent so much time preparing and it was over in a blink of an eye once the children woke and ran to the tree. I needed to find a way to hold on to the thrill.

Inspiration hit me one year and I created my very first Christmas morning game. The kids did the typical mad dash to the tree only to find that nothing was there. Nothing, that is, except for a note from Santa. I don't recall exactly what it was but it led them on a treasure hunt through the house in search of their reward. Every year after that a new game was created and each one came with a personal letter from the jolly old elf himself. He would explain how the game was to be played and then end it with some corny message. Each year I heard groans and moans about having to do go through this. I always got a special thrill though, because it always took at least an hour to get through the pile under the tree.

After a few years of this I was pleasantly surprised one day, when shortly before Christmas, my son and daughter asked me what kind of game Santa was going to make up that year. The game they always hated had turned into a much loved tradition. My daughters favorite of all was a trivia game that I had spent months putting together. Some of the questions were hard, some were easy, some were silly but everyone enjoyed the game and that's what counts the most. Making memories that will last forever is perhaps the best gift I ever gave.

Come back tomorrow and test your Christmas knowledge. I'll post several of the questions that I included in the trivia game.

Want to bet they do the same thing with their kids. I'll put money on it. These are the things that make Christmas so much fun. Good for you.

Have a terrific day Ann. :)

Oh I love it, sounds like tons of fun!

Sandee, no bet, I can almost guarantee that at least my daughter will be doing this some day

Buggys, oh it was, and I always had fun coming up with a new game every year too

Oh my, I'm tired just reading about it LOL Sounds like it was fun for all ... and THAT matters! You're a good Mom.

Lin, oh you mean I'm supposed to give a prize?...lol

Vickie, well put your feet up and take a rest :) It was fun even though they wouldn't admit to it then...lol

I did that a few times, but my guys never got to thinking it was fun. Can I borrow your kids?

You are so right, you made memories that will last forever. That's what make Christmas so special. I love it!

That sounds like a lot of fun and such wonderful Christmas memories! What a great idea!

Christmas memories are the absolute best. Sounds like fun fun! :)

Wow, that was such a wonderful idea! No wonder your daughter looks to you to bring the holly-jolly.

How exciting! Your kids are so lucky to have a hugely creative mom like you!!

My kids are pretty much grown now (son is 25 and DD is a senior) but I used to do the same thing. We always opened stockings first, sang "Happy Birthday to Jesus" (to keep it in perspective) and had breakfast. Since stockings were stuffed with fun but necessary items, I would always wrap any needed batteries and tuck them in there too. This gave the kids all through breakfast to try to figure out what there was under the tree for them that would use the batteries. Nothing like a little ANTICIPATION to add to the excitement :o)

Ann that picture looks seriously cool. You're so talented woman!

So fun to read of others wonderful Christmas memories!!

That was a great idea...you are so clever and what a great tradition...

The photo looks great and it sounds like you guys have some great memories. I was never good at trivia so I doubt I would have had any presents.

What a great tradition. I love hearing about how people establish these kinds of rituals. I agree that your kids will probably carry these into the next generation.

You are indeed an amazing mom Ann! Looking forward for your Christmas trivia :)

What a fun idea! For my boys birthdays when they were little we had treasure hunts. I would give them a card with a question that would send them to the next clue. In the end it would lead them to their gift. I have to say it took a ton of time but sure was fun.

You've created a tradition for your family that will last throughout their lives. That is what makes it so special.

That is too cool! Seriously, I love that. I can just imagine their little faces of woe and then later excitement.

That's so exciting !! Your tradition will be talked about for years to come!!

Sharkbytes, borrow them, heck you can have them...lol

Beaded tail I had a blast with it

Roschelle ah yes it's always been my favorite even if I have turned into a bit of a scrooge...lol

FishHawk I was just asking her the other day where she got all this holly jolly nonsense and she said "Gee I wonder"....lol

Duni aww thanks so much

Jen what a great and loving way to torture them...lol I love it

Buggys thanks so much, I was pretty pleased with it myself

Ollie McKays yes and a good way to inspiration too

Vange. ROFL yeah mine too

Grace I almost wish I was still doing it but it's sort of fallen off the last couple years, my mood just hasn't been in it.

Jude oh sure you would have, everyone did even if we had to cheat a little. they got points for guessing close

Lenox Knits I can see my daughter doing it for sure

Vanilla thanks I tried

B Boys Mom, these games always took me a lot of time to come up with and make too but it was all worth it. A birthday treasure hunt sounds like an awesome idea

Poetic Shutterbug, yep and I cringe every time I think that my ex might possibly be using this idea...lol

Miawa, yeah it was great. That was the only year that I did it that way though, it sure was fun

No many parents are as creative as you when comes to celebrating Christmas. Well done, Ann!

Great story! The best part being that you turned the worst part of Christmas - the over-commercialization and focus on presents into what is ultimately the best part - spending enjoyable time with those closest to you, and making great memories that last!