Work on the man cave has been very slow. The funds for that project depleted quickly since we had rented a dumpster and used some of them for little final touches on the upstairs. Slow doesn't mean there hasn't been any progress though.
This is what we were looking at before. 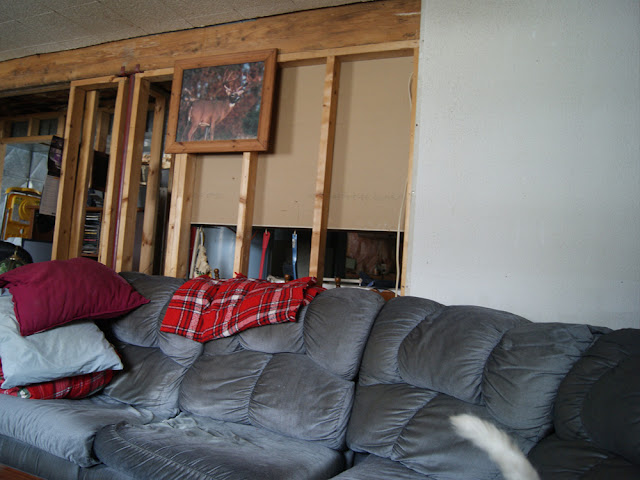 I know, really bad. It was not pretty at all and believe it or not this was probably where we spend most of our time. Wade gave the couch away to a friend. He said that he's had it for years and it was way too big for the room so he wanted something smaller.
This is the same wall minus the couch and you can no longer see through it. 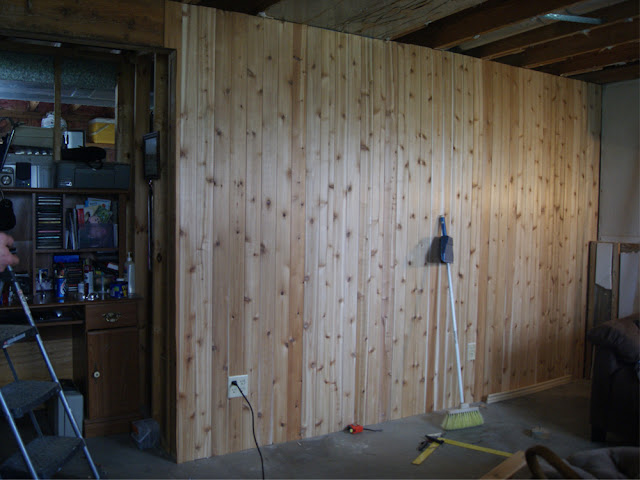 Personally I like the wood color just the way it is but he bought a dark walnut stain for it. He said it's a cave and it should be dark. Whatever, it's his cave I guess.
I thought that I was very thorough when I took the before pictures but when I went back to get one I discovered I didn't go as good a job as I thought.
Well for now this is what I've got. Hopefully there will be more progress soon.
Posted by Ann at 7:00 PM

Are you just doing it yourselves? Well, you have made a lot of progress!!

The car siding looks good.I have done it diagonal as well.

That looks like pretty good progress to us. I kind of like the color of that wood too. But it is his cave. Take care.

The cave is coming along nicely! Every mancave should have a four hole outlet for all the electronic toys!

The man cave is looking great! Do I spy recessed lighting (2nd photo) or am I just seeing things?
I like it!!

I love the look. The wood looks great and the stain is going to set it off perfectly. Yay for the mancave!!!

Looking good and I don't see any water from all that rain you've been getting. I hope it stays that way.

Have a terrific and dry day. My best to Duke. :)

LOL @ whatever it's his mancave!

I hope it survives the coming flood!

Slowly and surely... this will be a beautiful place :) just like your upstairs hall. Both of you are very good with handiwork.

I think part of Duke was in the first picture.. hehhehehee

It's a good feeling when you see some progress :)
We're still doing up our reading room, so I totally understand!

I think you are doing a great job.Slow is much better. Get it the way you want first time.One question. Do we get a pool table?LOL

so does this mean Duke will be getting a new sofa soon? do you have to buy one or do you already have it? i am thinking expense, since i am a cheap skate. a good job on the wall, I am sure Duke gave much assistance.

Wow! Y'all have done a Lot!!! Can't wait to see the new seating!!
hughugs

I love natural wood..the smell the look and the texture certainly can't be beaten...it will look great when its finished..and is looking mighty fine right now too!!

I vote for the natural look myself, but then, I guess it's not my cave.....

I'm just so impressed that you guys are doing all of this on your own! I wouldn't know where to begin :(

And I do spy a Duke tail in the first picture, I believe. What does Duke think of the man cave progress?

Wow...what a big difference! I'm sure that wall was a pretty penny :)

I too love the natural look of the room but how can ya argue with the "Man Cave" theory.

At least ya'll are makin' progress!

God bless and have a glorious day sweetie!!!

What does Duke have to say about the man cave? Seems like another good place to hide treats!

What does Duke have to say about the man cave? Seems like another good place to hide treats!

I like the color of the wood as it is too. Slow progress is looking really nice to me!

Renovations are always so slow going aren't they?