All in a days work

Whenever there is a cake order for a Saturday, Kelly, the girl who works my days off says she'll make me a deal. She'll do the one job I hate doing if I'll make the cakes for her day. I always jump at the deal.
Yesterday when she came in to work the first thing I said to her was "Wanna make a deal?" A little while later she took another cake order so I had to ask if that was going to be part of the deal too.  Two cakes in exchange for doing a job I don't like to do works for me.

This is one of the cakes I did. I forgot to take a picture of the other one.
The customer asked for a red border, no flowers, black writing and black scroll work on the sides. My writing was a bit crooked but other than that I thought it looked pretty good. 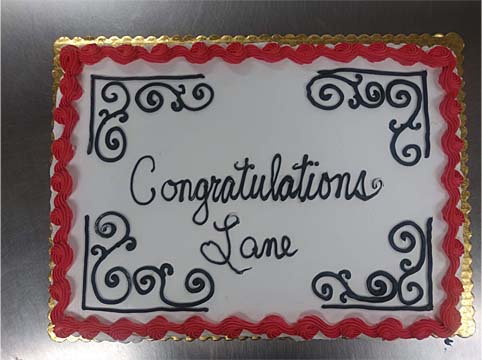 The cake is just what they wanted! I can't write this well on paper, let alone a cake! Now I want to know what job you hate.

I once worked in a chocolate shop years ago and every Easter and Christmas we used to have to ice words on either the eggs or Christmas gifts. I used to dread it. I think your writing is brilliant.
Briony
x

I am with Ginny, what is the job you hate... you did exactly what they asked for and they should be glad I did not do the writing.

The job I hate is doing the "break out". That is pulling all the product to be made the next day. It sounds easy enough but it's actually a lot of heavy lifting because you have to pull a huge cart out of the freezer that is loaded with boxes. Then you have to go through all the boxes to find what you need. Some of the boxes are quite heavy.

I dont think I could work in a chocolate shop. I would weigh a ton from eating all the merchandise.

What a great looking cake! I'm sure they loved it as did the one who it was made for.

Have a great weekend ~ FlowerLady

Your cakes are always stunning! Damn, you're good!

That is NOT easy...I've tried. You are very good at what you do. Have you ever thought of doing some baking out of your home for some extra cash??

Making a good deal at work is a good thing. I've done that before and it makes for a much nicer workplace.

Have a fabulous day off, Ann. Big hug to you and tons of scritches to Gibbs. ♥♥♥

Nice looking cake, Ann. Beautifully decorated! What’s a shame is that these grocery store cakes are frozen! What ever happened to cakes being made from scratch at a real bakery.

It's nice that you can make a deal with her. The cake looks great!

Thanks, can't say if they loved it or not since I wasn't there when they picked it up

There are some that I've done that were far from stunning at least in my opinion,

There are a lot of things I've considered doing but baking out of my home is not one of them. I don't mind doing them at work but I don't LOVE doing it.

Yes it does and it was a win win situation

The cake is beautiful! Especially the scroll work. You did a great job!

INteresting cake, but it's always good to do what people want! Book event for me, the bakery spelled my name wrong. How hard is JOAN, right? We had a good laugh

That's pretty bad that they spelled Joan wrong. Even the simplest names I ask customers to spell for me. Some people come up with strange ways of spelling names.