Another Pymatuning Lake Festival has come and gone. My friend Debbie and I have been doing this craft show since, I believe, 2013. That would make this our sixth one. Last year was my best year ever and this year I made less than half of what I did last year. Am I disappointed? No, not really. I had fun as always and I came home with more money than what I went there with so what's there to be disappointed about.

Saturday morning before we were officially open a lady came over and started looking at my card rack and bought 5 cards. We didn't even have all the sides down off the tent yet so I thought that had to be a good indication of how the day was going to go. From there it was just slow. I did sell some stuff but I it was mainly old stuff that I had discounted way down. At least I got rid of things. Sunday was pitifully slow. We had a brief rain shower but nothing that was too bad.

The show is held in a park that is just over the Pennsylvania line in Ohio. In the picture below you can see the causeway that you drive across to get to the park. Both sides have an awesome view of the lake. 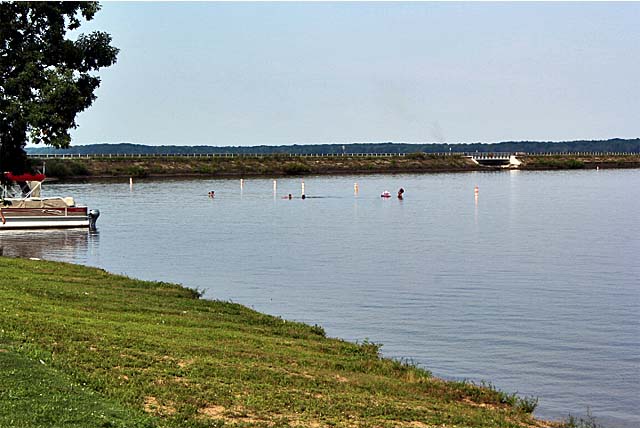 Here's my side of the tent. 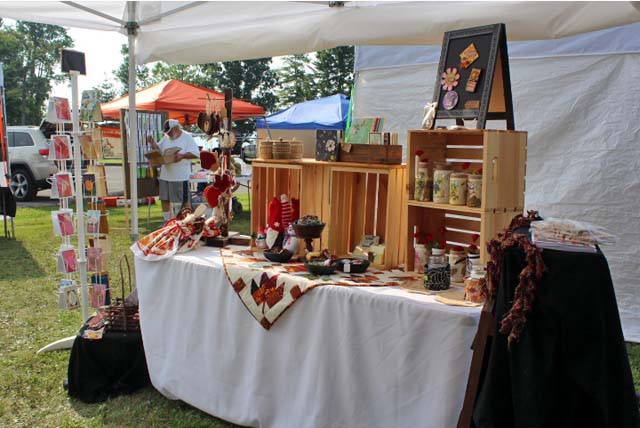 We're debating on whether or not to return to this show next year. They've raised the price which isn't a huge increase but at the same time it seems like it's becoming a smaller event. We have until May to decide so we shall see.
Posted by Ann at 12:30 AM

Your booth looks so inviting! I had been kind of confused abut it being in Ohio, as I thought you live in Pennsylvania. So this explains it. Are there any other craft shows around that you could try...is this the only one?

Your stall looks great, shame you didn't do as well as last year. I used to do craft shows but like you they kept putting up the price of the stall and sometimes I didn't sell that much. I used to enjoy making the stuff but in the end I stopped doing them.
Maybe you can find another venue that doesn't charge so much.
Briony
x

Glad you and your friend had a good time and it's always nice to move older inventory. Many years ago, I did craft shows with my cross stitched creations. Around here, the shopping malls host craft shows that seem to generate a lot of buyers. Have a good day.

Your booth looks great! I'm glad you had a good time with your friend and that you came home with more money than you went with.

We did our fair share of shows and flea market set ups. There is no guarantee about making $. Maybe you can find an indoor space that attracts a lot of traffic and be out of the weather also.

Keep creating and before you know it, you'll have a nice stash of new items to sell whenever and wherever.

Have a great week ~ FlowerLady

I like your card display thingy... surprised they did not all sell. I think what is happening to sales at flea markets is more and more are making there on things, using pinterest and able to find how to make their own cards. taking photos is so easy, and so easy to make cards with them... just a theory..... glad you got home with more than you had when you started.

Perhaps more, smaller craft shows locally. I'm glad the cards sold well they are really nice and even if folks don't snail-mail much they do include cards with hand-delivered gifts and such. I would be a card purchaser fer sure!

It looks like a nice way to spend the day and make a little money too. I like your card rack and the fall colors on your table. You are so creative! Hugs!

You had fun and came home with more money than you left with. That's a good thing.

Have a fabulous day, my friend. Big hug to you and tons of scritches to Gibbs. ♥♥♥

I'm sorry that you didn't have a busy show, but I'm sure you enjoyed getting away and having a little adventure from your everyday routine. The area looks beautiful :)

There are a lot of other shows we could do. Just have to look around and find the right fit

One year to the next you just never know what you're going to get or how things will go.

You are so right, you just never know how things will go. One time you can do great and the next not so much. It was fun though

There are a lot of one day shows right here near me and maybe next year I can try some of those. For the rest of this year I'll be focusing on other things. My cards will always be a big part of my crafting because I really do enjoy doing them.

Even when I don't do so well sales wise, it's fun to do the shows

Yep, absolutely. The extra cash and the fun was worth it

It wasn't a total loss. I did make a little cash and it was fun. It is a really pretty spot too.

I give you a lot of credit for still going. You have so much going on, but it was good to get back in the saddle again. Craft shows are sort of dying here. They seem to get smaller and poorly attended these days.

It was a nice break from all the other stuff even if I didn't sell a ton of stuff. I think part of the problem with this one was that there were several other events going on the same day. Also there is a new person organizing this one. She took over last year and she really isn't as good as the girl before her was.

What a beautiful place! I'm not surprised that your cards sold - they're really nice and you can't buy anything like them at the store. It's good to get rid of some of your older stuff so you can start anew.

I'm pretty cheap myself so I guess I can relate lol

It is really pretty there. I was originally planning on selling the cards for $2 or 2 for $3. I changed my mind at the last minute and I'm glad I did

That was a beautiful place to have a craft show. My friend is having a show in West Branch Mi. this weekend. She uses crates like yours and it always looks nice. I would have stopped at yours for sure. Maybe next year will be back to normal. Try again.

Sorry it wasn't very busy. Tough decision to make about going back. Your display looks great!