Some of you yesterday wondered what a pepperoni ball is and whether I would share the recipe. There really isn't a recipe. They are made from italian bread dough. The loaf is cut into 10 pieces and each piece is wrapped around 8 slices of pepperoni and 1/3 of a slice of mozzarella cheese. They are placed in a proof box which is where they rise, then baked for 20 minutes till they are golden brown.

It's been cold here and I've been craving soup. I've seen some recipes for hamburger soup and have wanted to try it. I read several different recipes and none of them were the same. I ended up coming up with my own version and it turned out pretty good if I do say so myself. 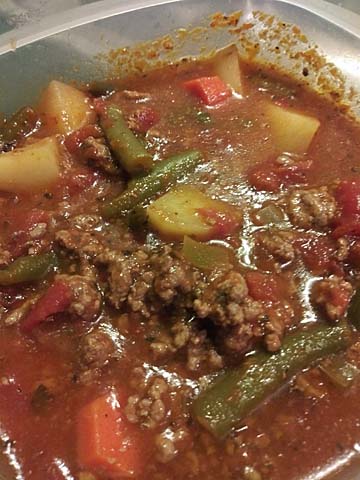 One recipe I read called for beef broth and tomato sauce. I had neither but I did have bouillon cubes and jarred spaghetti sauce. I mixed about a half jar of sauce with 4 cups of water and 4 bouillon cubes. I added some carrots and diced tomatoes. Next I browned some burger with onion and garlic and tossed that in. I let it simmer until the carrots were starting to get tender then I cut up some potatoes and threw those in along with a can of cut green beans. I call it my use what you have hamburger soup.
Posted by Ann at 12:30 AM

I don't think you could mess up making a hamburger soup. Yours looks and sounds delicious!

Thanks for sharing how you make the pepperoni balls.

Have a nice weekend ~ FlowerLady

Ground beef is how my mom makes veggie soup. I am not a fan....why you ask? Go ahead and ask...haha...anyway, I will do cook tomatos in sauce form but I do not like those chunks of maters cooked in anything I eat! Something about the way they feel in my mouth. I don't know....just a strange thing. I make mine without the chunks and I use stew meat, and different then my mom, I use spices! Have a good weekend.

Oh oh oh..... that soup looks absolutely delicious, Ann! There's nothing that warms a body more & I think the soul too. And I'm going to give those pepperoni balls a try. They sound simple enough. Thank you for sharing both recipes. xoxo

Yum, you soup looks delicious! We go to a restaurant in Carlsbad, CA that has the best pepperoni bread. Sound similar to yours.

Now I'm hungry for that soup. One of our yacht club members makes some really good hamburger soup.

Have a fabulous day off, Ann. Big hug to you and tons of scritches to Gibbs. ♥♥♥

Your soup looks delicious . . . it's that time of the year when soup tastes the best! I wish you would have taken a photo of you pepperoni balls. Maybe next time :)
Wishing you a warm and cozy Autumn weekend.
Connie :)

That soup looks wonderful! I haven't made any in awhile...it's time! Enjoy your weekend!

The soup looks good. I love soup on a cold day.