After my rough night Thursday, I had an achy day at work on Friday. I didn't do exactly as Grace had suggested and come home and crash but I did take it very easy. I laid on the couch and did a little reading, I played with Gibbs for a bit and just sort of chilled. I do mean that in more ways than one too. The temperatures have really taken a dive. The high was only in the 50's but the real feel was somewhere in the 40's. I have my thermostat set at 68 and the furnace actually kicked on once that I heard after I got home from work. I'm not ready for that to be happening just yet.

So yesterday at work, I had a couple more cakes to do. I took a picture of the first one but forgot to get one of the second one. This one isn't anything out of the ordinary, just your average writing and flowers. 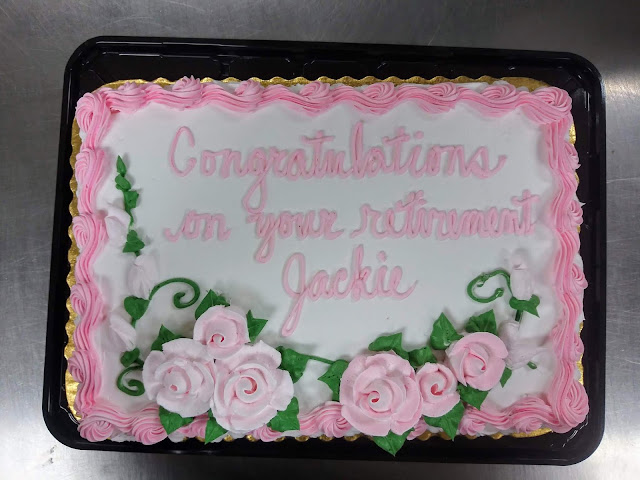 Not much planned for today. I may  do a little playing in the craft room. Later today I'm supposed to go to a pumpkin walk with my daughter. The school has a trail lined with pumpkins that have been carved by the elementary school kids and high school groups. I've wanted to go in past years but never did.
Posted by Ann at 12:30 AM

The cake is pretty, and your handwriting is just so beautiful!! The pumpkin walk sounds awesome!! We went from summer to winter in one day. Supposed to be 43 tonight.

the pumkin walk sounds like fun and pics for us tomorrow or next day, plus spending time with your daughter. woo hoo... sorry for the cold and that you are feeling achey….

After so many weeks of 95°+ that temp of yours sounds great! I'm ready for some cold (south Texas cold, that is)

A walk around viewing the pumpkin carvings sounds like fun!

That cake is gorgeous. Bet those flowers are so yummy.That sure sounds like fun to see the pumpkins. Have a good day Ann.

Pretty cake. I love pink, it's my favorite color.

I hope you have a great day off. Big hug to you and tons of scritches to Gibbs. ♥♥♥

Average for you, totally impossible for the rest of us!

The cake is beautiful. I hope you go to the pumpkin walk. It sounds like fun!

You do beautiful work, I am trying to find a few recipes this morning.

You always have the prettiest handwriting on the cakes!